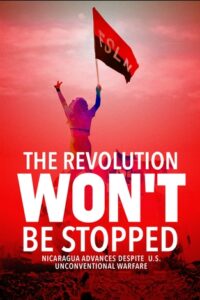 Republican strategist Karl Rove often advised his clients to attack not the enemy’s weaknesses but its strenghts. The bipartisan US foreign policy disinformation machine has taken Rove’s advice with tedious devotion. So, to attack Nicaragua, the machine’s fabrications and propaganda have targeted some of that country’s strengths: gender equity, Indigenous rights and autonomy, democracy, sovereignty, and a successful response to the pandemic, as well as the Sandinista government’s great popularity.

This should not surprise. It’s the same Rovian method used against Nicaragua’s friends and allies and countries the US designates enemies. For example, to attack Venezuela, the machine ignores the country’s electoral hyper-democracy and dubs the popular government “dictatorial.” To attack Cuba, the machine calls Cuba’s doctors and nurses working in the most medically underserved corners of the world and fighting the pandemic in dozens of other countries, “victims of human trafficking,” or else it calls them “spies.” To attack China, the machine smears China’s lightening-speed discovery and successful suppression of COVID-19. To attack Russia, the machine assails the overwhelmingly popular Crimean referendum as an invasion and undemocratic annexation, and it calls the East Ukraine resistance to the US-implanted coup government in Kiev as Russian aggression by proxy. To attack Syria, the machine disparages as aggressive the popular national defense against the West’s brutal proxy invasion and occupation, while delegitimizing the efforts of allies Russia and Iran to assist Syria.

By now, this Rovian practice should be an imperial “tell,” which in poker (I’m told) is key to beating a bluffer. The peoples of the world now read these tells like neon signs. Not so North Americans, at least not yet. This new compendium of essays could not more thoroughly expose the imperial bluff against Nicaragua.

The Revolution Won’t Be Stopped: Nicaragua Advances Despite U.S. Unconventional Warfare (Alliance for Global Justice, July 2020) is a well-organized collection of essays, paragraph-length news briefs, and reference lists, covering recent Nicaraguan history, including the electoral return of the Sandinistas in 2007, through the 2018 counter-revolutionary, US-authored putsch, its aftermath, and the country’s recovery and response to COVID-19 in 2020. It is a compelling and useful collection, like the earlier collection published in 2019 by the Alliance for Global Justice, Live From Nicaragua: Uprising or Coup?. The dozen-plus authors include scholars, reporters and activists well-known in solidarity circles for their deep knowledge of Nicaraguan politics, history and society and their ability to present it with clarity and eloquence.

The story of Nicaragua’s remarkable social, political and economic progress under Sandinista government will be familiar to readers of the alternative press, despite the hostility and neglect of Nicaragua found in faux-alternative media (e.g., Democracy Now). Essays throughout the volume detail this progress, but it can be quickly gleaned from the Introduction by Magda Lanuza and the opening essay, “Economic and Social Progress Continues,” by Nan McCurdy and Katherine Hoyt. The country’s more dramatic achievements include the reduction of poverty and extreme poverty, each by half or more, free basic healthcare and education, virtually zero illiteracy, near doubling of electrification to reach virtually the entire population, and production of about 90% of its own food consumption (“food sovereignty”). Less well-known achievements include Nicaragua’s internationally recognized humane community policing system (ordinary Nicaraguans simply don’t fear their police), and the country’s ranking of fifth in the world in gender equity, just behind four Scandinavian countries (“Nicaraguan Women Take Their Rightful Place,” by Rita Jill Clark-Gollub). Despite recognition of these social and economic achievements, and many more, by international organizations including United Nations agencies, you wouldn’t know any of this if you follow only US corporate and government-sponsored media.

Perhaps the most fascinating essays are those that describe the unique politics that may be behind Nicaragua’s ability to survive and progress despite the US hybrid war of subversion, sanctions, disinformation, and the putsch of 2018. “Peace and Reconciliation in Nicaragua,” by Susan Lagos, explains the non-punitive treatment of members of Somoza’s National Guard after the 1979 revolution, the Contras after the war of the 1980s, and the putschists after 2018. This, along with the decision of the government to keep the national police off the streets during most of the very violent 2018 putsch, may strike one as excessively generous, forgiving and even pacifist to North American readers (including this one). But this piece shows how these practices may be effective in turning enemies into allies, such as when many former Contra sometimes became allies in opposition to the neoliberal policies of the rightist governments in power between 1990 and 2007. Further, these unusual military, policing and juridical policies, while certainly generous and forgiving, may also be good tactics, perhaps analogous to techniques used in martial arts to deflect the attack of a foe without using force, especially a much more powerful and determined foe like the US, the persistent author of assaults on Nicaragua from the 19th century to the present.

“Nicaragua’s Popular Economy: The Face of Five Centuries of People’s Resistance,” by Yorlis Luna, “Tourism in Nicaragua: Breaking with the Defunct Idea of Development,” by Daniel McCurdy, and the Afterword, “Nicaragua Puts People First in Pandemic Response,” by Nan McCurdy, all describe Nicaragua’s unique and successful economic and public health strategies. The Yorlis Luna and Daniel McCurdy pieces explain the theory and practice of Nicaragua’s “popular economy,” emphasizing the informal and smaller business sector, providing much of Nicaragua’s food, clothing and housing. It is a “self-managed, associative and solidarity-based economy,” based in pre-capitalist and pre-Hispanic economics, and which now provides “70% of employment, 42.3% of value added and 59.3% of income, excluding remittances.” It also generates most of the nation’s wealth. (See also, Live from Nicaragua: Uprising or Coup? A Reader, 2019, “The Popular Economy: Nicaragua’s Anti-Shock Therapy,” by Nils McCune and “A Creative, Enterprising and Victorious Economy to Defeat the Coup,” by Jorge Capelán.)

Nan McCurdy’s Afterward describes Nicaragua’s successful pandemic response. Lockdown would have been a luxury that Nicaragua, the second poorest country in the hemisphere, simply could not afford. But what it could do was mobilize health workers and brigadistas to make health check visits to most homes in the nation and give advice, set up COVID-19 hotlines, control entry points at borders and airports, urge 14-day self-quarantine to visitors, and rely on its public health system, which is the best in the region, even better than that of Mexico, a much richer country. As a result, Nicaragua has had fewer than 200 deaths from the disease as of this writing.

Other essays cover Nicaragua’s excellent progress in conservation and environmental policy, including significant conversion from fossil fuels to renewables (Stephen Sefton, Paul Oquist). Chuck Kaurman reviews the data showing the consistent popularity of the Sandinista party and leadership. Jorge Capelán summarizes a week of Nicaraguan news in September 2019, including the little-known but highly significant replacement of COSEP, the 2018 putschist business organization, with CONIMPYMES, an organization of small- and medium-size businesses, as Nicaragua’s representative at the Central American Business Council. The politics and imperial instrumentalization of the Sandinista’s opposition is dissected in a series of short essays by Barbara Larcom, Chuck Kaufman, Ben Norton, and Carlos Fonseca Terán.

Essays by Colleen Littlejohn and Adolfo Pastrán Aranciabia outline the post-revolutionary history of the autonomous regions of the Caribbean coast, which cover nearly half of Nicaraguan territory. It’s a story of material and social progress, increasing communal land rights for Indigenous and Afro-descendant people, and the success and popularity of the Sandinista party in the regions. It’s also a story of relative neglect under the neoliberal governments of 1990 to 2007, the interregnum between the periods of Sandinista governance. All this will surprise those who in recent months have read various reports of government indifference toward the lives and rights of its minority populations, but it will not surprise those who have followed the thorough debunking of these tales in the (actually) alternative press. (See, “Nicaragua Rebuffs Attacks at Human Rights Hearing,” by John Perry, 3/20/21; “Dismissing the Truth: Why Amnesty International is Wrong about Nicaragua,” by AFGJ, 2/26/19; “Nicaragua’s Indigenous Peoples—Neocolonial Lies, Autonomous Reality,” by Stephen Sefton, Tortilla con Sal, 3/5/21.)

It’s curious that these organizations fail to recognize human rights as a social, political and mass project, the kind of project Nicaragua is engaged in. When HRW, AI and others present North Americans with falsified and mischaracterized incidents as salient examples of Nicaraguan society and government, they willfully and disingenuously misunderstand the very idea of human rights, and fuel narratives that support deadly and destructive US sanctions and hybrid warfare. Indeed, this anthology reports Human Rights Watch’s explicit endorsement of US sanctions against Nicaragua (passed, by the way, by a unanimous voice vote Congress in 2018 and later expanded by presidential executive order in 2020). If these organizations really cared about human rights, they would celebrate Nicaragua’s unprecedented human rights accomplishments and compare them to the horrific abuse of human rights in some of Nicaragua’s Latin American neighbors, such as Honduras or Colombia, whose governments would not last a minute without US support.

It is a testament to Nicaragua’s exemplary success in being “the threat of a good example” that the US is hell-bent on destroying Nicaragua’s humane, liberatory, sovereign and democratic project. This book will help defend that example for the good of Nicaragua and all humanity.

This article was posted on Thursday, April 8th, 2021 at 6:31pm and is filed under Book Review, Human Rights Watch, NGOs, Nicaragua, Revolution.