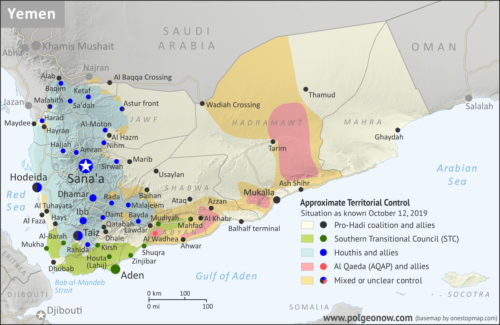 The Yemeni city of Marib is in the thick of fighting between Houthi rebels and loyalists of Abdrabbuh Mansur Hadi’s government. Marib is the capital of Marib Governorate, lying roughly 100 miles northeast of the country’s capital in Sana’a. It was established after the 1984 discovery of oil deposits in the region and contains much of Yemen’s oil, gas, and electric resources. Marib is the last governorate under the control of the Hadi government, but it has been under increasing attack by the Houthis since early 2020. If seized by the Houthis, the resistance group can use that advantage in negotiations and even continue further south.

Hadi administration’s territorial weakness reflects the failure of the 6-year long Saudi-UAE war against Yemen. The origins of the war can be traced back to 2011 when Arab Spring protests erupted in Yemen. Authoritarian president Ali Abdullah Saleh, who had survived in power since 1978, was forced to resign. He stepped aside in favor of Hadi, who was his vice president from 1994 to 2011. Hadi’s interim government was legitimized by way of a February 21, 2012, referendum in which his was the only name on the ballot.

From the day he assumed power, Hadi began a process of brutal neoliberalization. He steamrolled Yemen into membership of the World Trade Organization (WTO) in December 2012, bringing about egregious amounts of austerity and untrammeled liberalization. Hadi’s first wave of privatizations included 11 of the 12 main sectors of the Yemeni economy with 78 of the 160 subsectors included for immediate liberalization. His open embrace of the World Bank exposed Yemeni companies to competition in the “free market,” a move that promised tens of thousands of layoffs.

The Hadi government combined a neoliberal orientation with the undemocratic imposition of a new politico-legal structure. Early in Hadi’s mandate, the government arbitrarily rewrote many of Yemen’s laws, including setting in motion a process of federalization designed to benefit specific constituencies and forever weaken those regions known for resisting Yemen’s economic subordination to Saudi and Qatari interests. Faced with these unprecedented abuses of executive powers, millions of Yemenis supported the Houthi movement.

Houthis represent a religious revivalist movement within the Zaydi branch of Shi‘i Islam led by the sons of Badr al-Din al-Huthi, a notable Zaydi scholar, in the Sa‘ada province on the Saudi border. In the 1990s, Zaydi resistance to Saleh was spearheaded by Hussein al Houthi. Radicalized by the US War on Terror and invasion of Iraq, Houthis founded Ansar Allah, or “Supporters of God”, and engaged in a tireless guerrilla war against Saleh, whom it decried as a puppet of Washington and Riyadh. Thousands joined the Ansar Allah’s ranks, taking its estimated number of fighters from 10,000 to 100,000 by 2010.

American and international monitoring groups sent down to “assist” in the post-2011 transition openly condemned the popular AnsarAllah, referring to it as an “armed group” in the attempt to delegitimize it. There were even formal efforts to side-line AnsarAllah in the subsequent National Dialogue Conference (NDC) held between March 18, 2013, and January 24, 2014.

The outright persecution of Houthis proved to be counterproductive, resulting in the formation of a temporary and unstable alliance between the ousted Saleh and AnsarAllah. Even after resigning from the presidency, Saleh retained a lot of support within the security services. In September 2014, Houthi militias, in alliance with Saleh, took over government buildings in the capital while the army stood by.

It is important to note that when the forces allied with AnsarAllah entered Sana‘a’ they did not formally remove Hadi as interim President. Rather, they established committees that demanded the immediate establishment of a timeframe for elections, an immediate halt to the frantic selling off of Yemen’s assets, and review of all new laws instituted during the Hadi period.

The Saleh-Houthi association unraveled after two years. On December 3, 2017, Saleh announced he was switching sides, leaving his two-year long alliance with the Houthis and joining Hadi and the Saudis. The Houthis quickly routed his forces in the capital and blew up his house. The next day they stopped him at a checkpoint and killed him too, announcing that they had also avenged al-Houthi – killed by Saleh’s military in 2004.

Hadi fled to Aden and appealed to Riyadh and Abu Dhabi for military assistance. Saudis and Emiratis proceeded to assemble an alliance of Middle Eastern and African states – Bahrain, Egypt, Jordan, Kuwait, Qatar, Eritrea, Morocco, Senegal, Somalia and Sudan – acting in the name of Hadi’s government – exiled in Riyadh. The first Saudi air strikes were launched on 26 March, 2015 to prevent Aden falling to Saleh’s Republican Guards. This was the beginning of genocide.

The Saudi intervention in Yemen was propelled by the monarchy’s domestic concerns. The Crown Prince of Saudi Arabia, Mohammed Bin Salman (MBS), staked his prestige to a Saudi victory. Just prior to the war, King Salman took the throne and appointed his son MBS as defense minister. MBS appeared on Saudi television the day after the bombing began; he was in the military operations centre, on the phone, talking to pilots, looking at maps — trying to show that he really was in charge.

Within days of starting the war, Saudi Arabia imposed a total land, air and sea blockade, along with targeting vital agriculture and food supply infrastructure that sustains life for the 29 million Yemenis – all of which constitute war crimes under international law. Yemen imports 80% of its food. The Saudis intercept and impound some aid ships for periods up to 100 days. Other ships are never allowed to dock in Yemen. The delays the naval blockade creates cause food prices to soar, making them unaffordable to most Yemenis.

Half of Yemen’s hospitals and medical clinics have been destroyed or forced to close since the coalition bombing began. Public health personnel and hospital facilities have been attacked, leading to the closure of health facilities. According to the organization Physicians for Human Rights (PHR), 92-95% of medical equipment in Yemeni hospitals and health facilities no longer functions. Over 50% of Yemenis do not have access to healthcare, and the other half has access to a “compromised healthcare system” that lacks the personnel, medicine and medical equipment necessary to treat the population’s basic health needs. The coalition bombs cranes used in Yemeni ports, making it impossible to unload medicine.

In a nutshell, the effects of the imperialist war against Yemen have been devastating: cholera and hunger have arrived on a scale that has not been seen since the last century, with some 20 million experiencing food insecurity and 10 million at risk of famine. An estimated 110,000 have been killed in the fighting, with a death toll of 233,000 overall, mostly due to indirect causes such as lack of food and health services.

Saudi Arabia has justified the saturation bombing of Yemen by claiming that the Houthis are an Iranian proxy. Given that the Saudis and local allies control the Gulf of Aden, Iranian ships laden with weapons cannot travel all the way to northern Yemen and Sana’a. The same applies to the airspace, which is entirely controlled by the Saudis. While Iran may have managed to send some support and advisors, it is absurd to describe the Houthis as Iranian-backed. Moreover, the Saudi usage of the Iranian bogeyman stokes the sectarian flames of the Shite-Sunni narrative and elides a deeper analysis of the problems plaguing Yemen after the 1990 unification.

With the onset of the COVID-19 pandemic in Yemen, the genocidal impact of the war has combined with an epidemiological crisis to generate a perfect storm for Yemenis. However, Yemeni lives don’t matter for the rulers sitting at the helm of our brutal system. War profiteers are least concerned about what happens in Yemen as long as they are able to sell a full range of arms that kill human beings and destroy nations. Without concerted action, the genocide in Yemen will continue, with the profits accruing to the arms industries.

This article was posted on Thursday, April 15th, 2021 at 5:25pm and is filed under Genocide, Islam, Militarism, Saudi Arabia, Yemen.