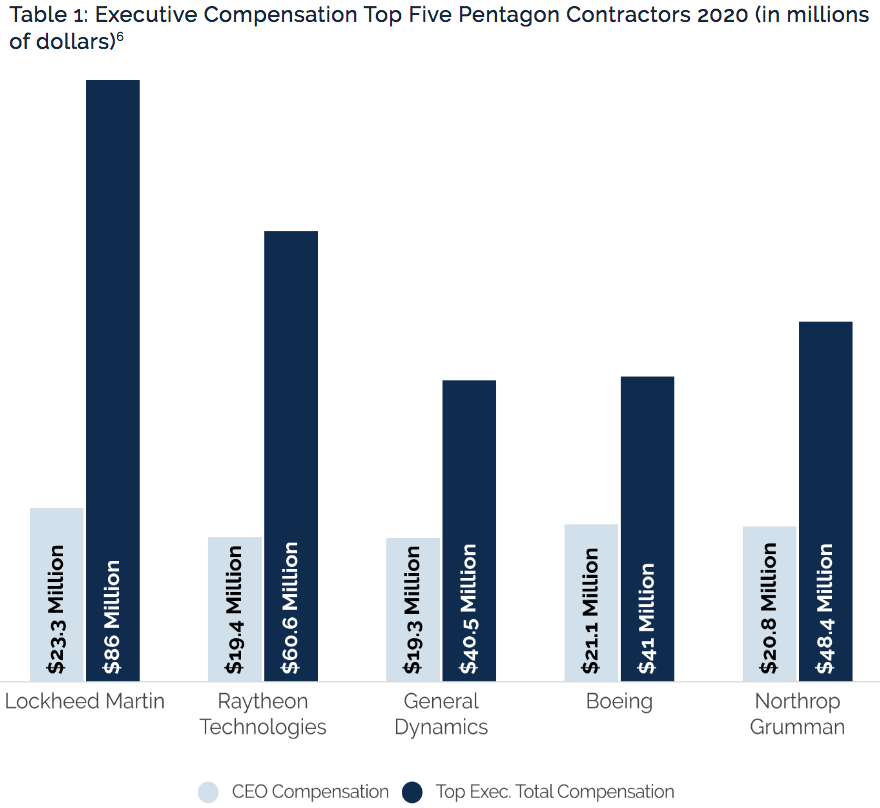 With U.S. President Joe Biden still under fire for proposing a $753 billion national defense budget for the next fiscal year—the bulk of which would go to the Pentagon—a report published Tuesday exposes the “huge sums paid to the CEOs and other top executives of the nation’s five largest weapons contractors” in 2020.

The new Center for International Policy (CIP) issue brief—entitled Executive Excess: CEO Compensation in the Arms Industry, 2020 (pdf)—was authored by William D. Hartung and Leila Riazi, who began by acknowledging the current president’s recent proposal, which has been widely rejected by progressives.

“These enormous sums for the Pentagon are often justified as necessary to meet the needs of military personnel,” Hartung and Riazi note, “but in fact, roughly half of the Pentagon’s budget is spent on corporations like Lockheed Martin, Boeing, General Dynamics, Raytheon Technologies, and Northrop Grumman, as well as the hundreds of thousands of private contractors employed by the department.”

The brief points out that those top five weapons firms received over $150 billion in Pentagon contracts during Fiscal Year 2020—and “not all of these funds are well spent.”

“Cost overruns and performance problems, expenditures on weapons systems that are not relevant to current security challenges, and investments in weapons that actually make the world a more dangerous place all detract from, rather than enhance, America’s security,” the report says. “There is also widespread waste and excess overhead within the Pentagon, which is the only major federal agency that has never successfully passed an audit.”

Hartung and Riazi highlight executive compensation as “one indicator of Pentagon waste,” noting that in 2020 alone, the CEOs of those top five contractors collectively raked in $105.4 million.

“When other major executives at these firms are taken into account—those holding the top positions at each firm whose salaries are required to be publicly disclosed—total executive compensation at the major contractors comes out to $276.5 million for 2020,” the report says. “Total compensation for major executives of the top five contractors exceeded $1 billion in total for the four years from 2017 to 2020.”

The brief contrasts the wealth of weapons contractor executives with the pay of U.S. service members, noting that “average annual CEO compensation for the top five contractors is over $21 million per year, compared to roughly $39,000 in pay and basic benefits for a first-year military enlistee, a ratio of over 500 to one.”

“A general of the highest rank earns well over $200,000 per year,” the report adds, “still only about one one-hundredth of average CEO pay at the top five contractors.”

The report also highlights the substantial share of each company’s revenue that comes from Pentagon contracts—emphasizing that it means portions of “the salaries they pay their executives are subsidized by taxpayers.”

According to the brief:

For four of the top five contractors, defense revenues accounted for three-quarters or more of their business in 2019, the last year for which full figures are available for this measure, which includes sales to both the U.S. governments and foreign governments. When just sales to the U.S. government are taken into account the figures range from roughly 37.5% for Boeing, which makes commercial aircraft, to 84% for Northrop Grumman, with figures available as of 2020.

Hartung and Riazi also detail how many jobs could be created if the $276.5 million in compensation for executives at those five contractors was instead invested in education, green energy, healthcare, or infrastructure.

Though it represents a small portion of overall U.S. military spending, such an investment could create 2,710 new jobs in infrastructure or green energy, 3,954 in healthcare, or 4,203 in education, the brief says.

“Exorbitant compensation for executives of the top Pentagon contractors, subsidized by the taxpayer, is just one example of excessive overhead at these firms,” said Hartung, director of CIP’s Arms and Security Project, in an emailed statement. “Congress and the administration should take a closer look at these costs with an eye towards reducing them and freeing up funds for other needed purposes.”

We can either choose to perpetuate or alleviate human suffering. The choice is clear.

As Common Dreams reported after Biden unveiled his spending proposal last month, a diverse coalition of progressive advocacy groups has made a similar demand.

“It is crystal clear that the status quo is failing to keep our communities at home and abroad safe,” the coalition said, adding that “there are numerous proposals on how to rein in the gargantuan Pentagon budget while increasing national and global security.”

“We are eager to work with Congress and the Biden administration to support these or other long-overdue efforts to scale back Pentagon spending,” the coalition said. “The American people know that producing more weapons, greenlighting corporate contracts, and propping up endless war slush funds will not make us safer.”