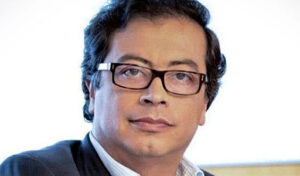 Gustavo Petro is a force to be reckoned with in Colombian politics.  The senator – once a member of the M-19 guerilla group, later elected to the House of Representations in the 1990s and then the mayorship of Bogotá (2012-2016) – has become the candidate to beat in next year’s presidential election.  He is such a prominent opponent of right-wing politics in the country that while Donald Trump was campaigning in Florida in 2020 he included Petro in one of his anti-socialist diatribes, tweeting that “Biden is supported by socialist Gustavo Petro, a major LOSER and former M-19 guerrilla leader. Biden is weak on socialism and will betray Colombia. I stand with you!”

Petro previously ran for president in 2018 and made a strong showing, but ultimately lost to the far-right Iván Duque of the Democratic Center party by approximately 12%.  It is worth noting that leaked recordings pertaining to the 2018 election contain evidence that Duque’s party conspired with individuals linked to narcotraffickers to commit electoral fraud, and subsequent investigations have uncovered at least six cases of fraud in both the House and the Senate.

Since 2018, Petro’s grassroots appeal has only grown.  Polls for the upcoming 2022 election consistently place him in first place, and a survey conducted by pollster Invamer in April 2021 shows that “if elections were held tomorrow, no candidate would stand a chance against Petro.”  Nestor Morales of the Mañanas Blu radio program remarked:

Petro is right to be celebrating, because [this survey] is well above its historical averages… what is impressive is that Petro is winning in absolutely everything…He has votes in sectors that were not related to him; for example, the upper strata, the old men who were so anti-petrist. There is a change, a transformation of public opinion.

The discrediting of Duque and Uribismo, the far-right political project of his mentor former president Álvaro Uribe (2002-2010), has contributed to Petro’s rise in popularity.  His already solid base has been supplemented by those disillusioned by Duque’s failed COVID response and the brutal continuation of Uribista violence against former guerilla fighters and social activists, in contravention of the previous government’s peace deal with the FARC.  Furthermore, the Duque government’s recent decision to introduce a regressive tax reform that exempted the oligarchy while punishing ordinary workers has led to massive protests across Colombia.  Government forces have responded brutally, causing multiple deaths and leading the UN rights office to condemn their “excessive use of force.”  These protests have produced two general strikes thus far – one on April 28 and another on May 5 – and resistance to the austerity measures have grown to dominate the political discourse in the country, similar to how the 2019-2021 protests in Chile, which began due to a transit fare increase, soon snowballed into a nationwide indictment of neoliberal governance as a whole.

Gustavo Petro represents an alternative.  Despite his association with Latin American socialism, however, Petro’s political views have evolved greatly over time.  No longer an adherent of M-19’s revolutionary leftism, he now advocates a more moderate social-democratic model.  In interviews, he is quick to distance his favored politics from those introduced in Cuba and Venezuela – policies which, in addition to angering domestic elites, inevitably leads to aggression from Washington as well.  Instead, he compares himself to more gradualist figures, once stating that “I have more in common with Pepe Mujica [than Castro or Chávez],” referring to Uruguay’s famously modest left-wing president who served from 2010 to 2015 and oversaw notable macroeconomic growth as well as the legalization of marijuana and same-sex marriage.

Despite the softening of his views, Petro remains a target of the Colombian right and has received constant death threats during his public career.  He claims to have slept with an assault rifle over the course of the “parapolitics” scandal, during which dozens of politicians (many with links to the Uribe administration) were investigated and convicted for illegal ties to paramilitary groups with evidence that he helped present to Congress.  His brother was allegedly threatened with assassination (certainly no idle threat in Colombia), and his son Andrés is currently in exile, having been granted asylum by the Canadian government due to threats and political harassment from right-wing groups.  Furthermore, in March 2018 a Cuban man named Raul Gutierrez was arrested in Bogotá for plotting to bomb the Cuban embassy and assassinate both Petro and FARC leader Rodrigo “Timochenko” Londoño.  While imprisoned, he claimed that a right-wing Colombian group based out of Florida hired him to commit the attacks.

Leftism and social activism are dangerous business in Colombia.  In the first three months of 2021 alone, 40 activists were murdered and there were 23 massacres of predominantly poor and Indigenous peoples by paramilitary groups.  The impunity rate for the murder of trade unionists is approximately 87% and, as COVID-19 wracks the country, the Duque administration has continuously ramped up violence against areas which contain former FARC fighters.

One of the most horrific incidents so far this year was the murder of twelve children and two nineteen-year-olds in a bombing raid against an alleged armed group in Guaviare.  Petro commented publicly on the massacre, posting a list of the children’s names on Twitter and writing “14 children killed [including the two 19-year-olds] in a bombardment ordered by the Minister of Defence. These are their names. End the war, end the genocide of children in our country.”

Marcha Patriotica, a progressive umbrella organization that brings together historically marginalized groups within Colombia including peasants, people of color, women, and the LGBTQ community, has also faced persecution.  Almost two hundred of its members have been murdered since its founding in 2011, while an Inter-American Commission on Human Rights resolution from 2017 claimed that hundreds more are living under severe risks and that the government could protect them if it chose to act.

The Colombian right-wing has historically lumped together unionists, social activists, and left-wing figures with the longstanding peasant-led insurgencies in the countryside, labelling them “Castro-Chavistas,” “terrorists,” and “guerrillas posing as human rights defenders.”  These are extremely serious threats in Colombia, and not just due to ongoing atrocities.  One must also take into account the “political genocide” against the Patriotic Union (UP) in the 1980s and 1990s.

The UP was formed in 1985 during peace negotiations between the FARC and the Belisario Betancur administration.  Its purpose was to allow the FARC to participate in the electoral system in exchange for a ceasefire.  What followed, however, was a massacre: the party’s members were relentlessly attacked by paramilitaries and drug cartels and over 3000 of its members, including elected officials and presidential candidates, were murdered.  This led to a resumption of overt hostilities and proved to the guerillas that the Colombian state was an inherently oppressive, right-wing organization that would not allow fair elections to weaken its hold on power.

The US-backed military has historically been the arbiter of the political realm in Colombia, backing conservative figures and using paramilitaries to kill or intimidate those who organize for social change.  Their brutal acts have not shaken America’s diplomatic and material support or its military cooperation – as Joe Biden wrote during the 2020 election, it is the “keystone” of US policy in Latin America and has served as an indispensable ally in the region-wide imposition of a free-trade model vulnerable to American capital.  Scandals like the extermination of the UP, the murder of over 6000 civilians in the 2000s as a way of boosting the army’s kill-count against the insurgencies, and the almost universal impunity for the killing of trade union activists have not lessened America’s support in the slightest.

Nor have recent atrocities weakened Canada’s support for the Colombian government.  Stephen Harper made a point of deepening Canada’s ties to right-wing governments across the region, and Justin Trudeau has likewise taken a very active role in supporting the Latin American right against progressive movements.  Yves Engler writes that, in regard to Colombia, Ottawa quickly congratulated Duque after his fraud-riddled election win, refused to criticize the attempted overthrow of Venezuelan President Nicolás Maduro that was launched from Colombia in May 2020, and has consistently failed to draw attention to the ongoing injustices in the country.

This is the political climate – one of violent repression that receives the tacit or outright support of imperialist countries – in which Gustavo Petro has fought to present an alternative.  Although the presidential election will not be held for over a year, Petro’s dramatic rise in popularity is evidence that the Colombian people are seeking a break from the status quo, and that he may represent their best chance to achieve this.

Owen Schalk is a writer based in Winnipeg. His areas of interest include post-colonialism and the human impact of the global neoliberal economy. Read other articles by Owen.

This article was posted on Friday, May 7th, 2021 at 10:32pm and is filed under Colombia, Elections, Opinion, President Iván Duque, Senator Gustavo Petro, Terrorism (state and retail).