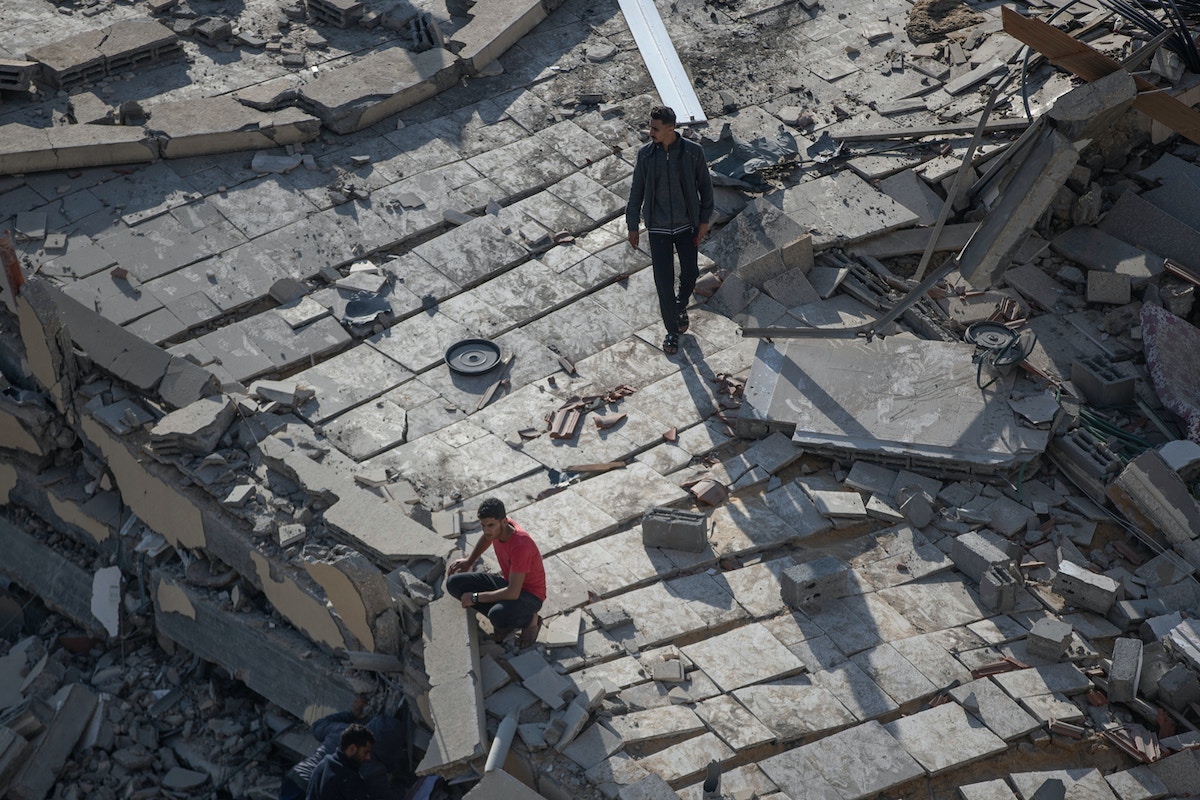 Arab League member nations have issued an almost uniform condemnation of Israeli strikes in Gaza following protests over possible evictions in Israeli-occupied East Jerusalem. The statements from countries like Saudi Arabia, the United Arab Emirates, Turkey, and Bahrain come as several of the nations have normalized relations with Israel, or are signaling an openness to doing so, amid its ongoing occupation. Yet some analysts are skeptical that the Arab League nations’ words will amount to much change for Palestinians.

“Whether or not states have formal relations or informal relations as they’ve had for the years preceding it, there’s little evidence that that actually manifests in greater changes for the human rights of Palestinians on the ground,” said Omar Shakir, Israel and Palestine director for Human Rights Watch. The organization is investigating alleged human rights violations related to ongoing developments in the region.

Saudi Arabia’s Ministry of Foreign Affairs issued a statement Saturday saying the nation “rejects Israel’s plans and measures to evict dozens of Palestinians from their homes in Jerusalem and impose Israeli sovereignty over them.” Also on Saturday, foreign ministries of Bahrain and the UAE called on Israel to stop all actions provoking the conflict and to take steps to de-escalate tensions. On a call Tuesday, Saudi Arabian and Jordanian officials called for protection of Palestinians against Israeli attacks, condemned “illegal Israeli practices,” and warned against continuing evictions. The Arab League held an emergency virtual meeting Tuesday to discuss the situation and condemned Israeli airstrikes in Gaza.

Prominent Arab League members that recently drew closer to Israel and had established relations with the country had somewhat softened their criticisms of its ongoing occupation. Their tone now marks a significant shift in a willingness to speak with a unified voice to denounce Israel’s actions, as in the older days of the Arab League, even if it doesn’t amount to a change in Israeli policy. But countries that have full relations with Israel were more reserved in their responses. Some analysts say that reservation could bode well for finding an eventual solution to the conflict. Others aren’t so sure.

Historically one of Israel’s loudest critics, Saudi Arabia has been quicker to condemn Palestinian leadership as its neighbors thaw ties with Israel. Relationships between Palestinian leaders and the UAE and Bahrain, which both agreed last year to formally establish diplomatic relations with Israel as part of the “Abraham Accords,” have grown rockier.

“It seems we are only at the beginning of the events, and everybody around is watching and studying,” said Ambassador Alon Liel, former envoy for Israel to South Africa, Mozambique, and Zimbabwe and former director general of the Israeli Ministry of Foreign Affairs. “The official responses are so far very cautious and mostly meaningless, even from the USA.”

“I’d say that any of the players in the Arab world do what should be expected from them,” said Roie Yellinek, a nonresident scholar at the Middle East Institute, a Washington think tank. “It is clear why Turkey and Iran condemned Israel and the UAE and Bahrain try more to find a balance and KSA [Saudi Arabia] and Egypt are somewhere in between.” A country with a full diplomatic relationship with Israel, like the UAE, is a key part of finding an eventual solution, Yellinek said.

Palestinian protests mobilized in response to planned evictions in East Jerusalem, and police have cracked down on protesters as clashes have continued to escalate during the holy month of Ramadan. Police forces attacked worshippers at East Jerusalem’s Al Aqsa Mosque on May 8, the last Friday of the holiday, and raided the mosque again on Monday. Hamas has responded with rocket fire, provoking Israeli airstrikes. The death toll so far includes 65 people in Gaza, including 16 children, and seven Israelis, including two children. The clashes represent the worst fighting in the region in seven years.

Few of the Arab League nations speaking out, including those that have normalized relationships with Israel, have actually leveraged their power to advance human rights for Palestinians, Shakir said.

“We’re the closest we’ve been in seven years to full-fledged hostilities,” Shakir said. “For years, if not decades, the authoritarian Arab governments that dominate the region have at times rhetorically spoken about their support for human rights of Palestinians, but their statements generally amount to little more than hot air.”

“We’re the closest we’ve been in seven years to full-fledged hostilities.”

The UAE claimed that Israel’s agreement to pause further annexation of Palestinian land was a precursor to normalizing relationships with the country. Other countries that normalized relationships with Israel last year include Sudan, Morocco, and Bahrain. Egypt first recognized Israel in 1979 and is attempting to mediate negotiations for a cease-fire. Jordan signed a peace treaty with Israel in 1994, but the relationship has deteriorated in recent years, and Jordan has been one of Israel’s more outspoken critics in the region.

Tahseen Elayyan, a senior legal researcher at Al-Haq, a human rights organization headquartered in the West Bank, said in an email that “with only few exceptions,” the responses from Arab League nations were “very weak.” He said that representatives of Arab League nations that have normalized relations with Israel “did not bother to visit Jerusalem to see what is going on in Sheikh Jarrah for example,” the neighborhood in East Jerusalem where Palestinians are facing eviction.

“The public in all Arab states has lost faith in the Arab regimes,” Elayyan said. “This applies especially to Arab countries that have normalised relations with Israel in spite of its occupation of the Palestinian territory and its continued violations of the Palestinian rights.”