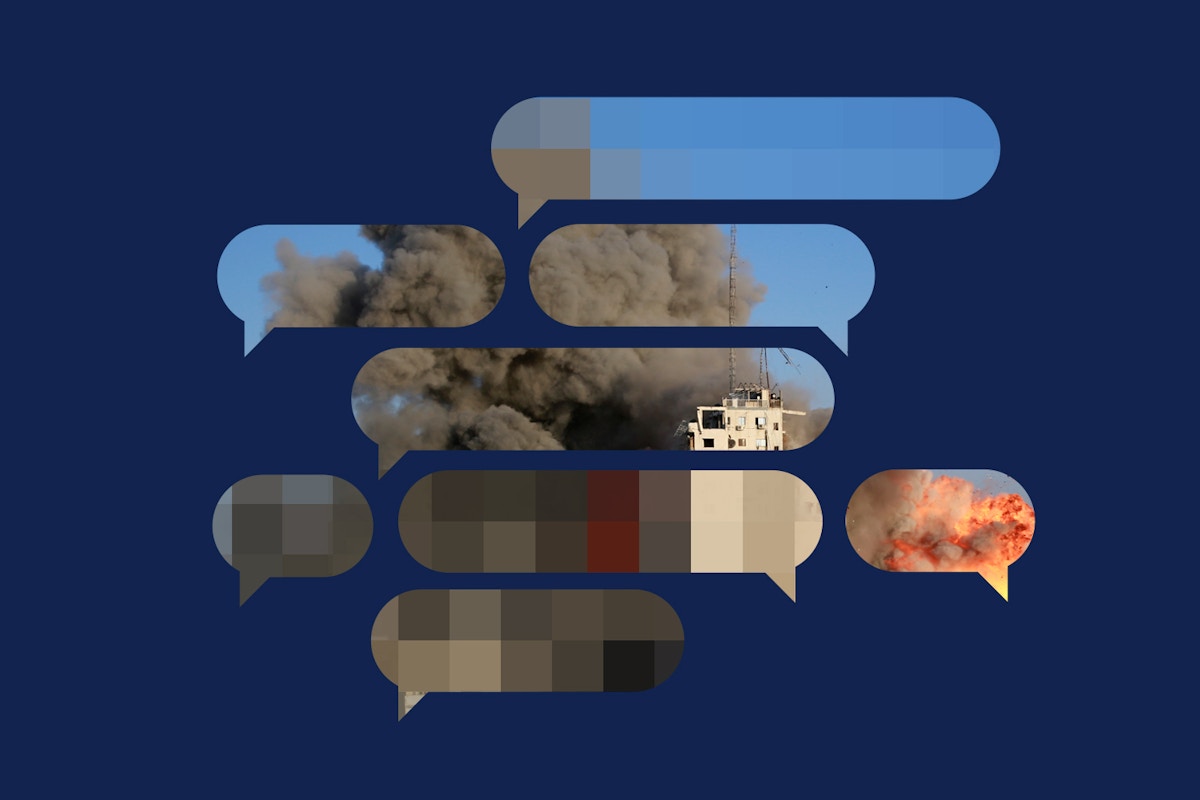 Facebook’s secret internal rules for moderating the term “Zionist” let the social network suppress criticism of Israel amid an ongoing wave of Israeli abuses and violence, according to people who reviewed the policies.

The rules appear to have been in place since 2019, seeming to contradict a claim by the company in March that no decision had been made on whether to treat the term “Zionist” as a proxy for “Jew” when determining whether it was deployed as “hate speech.” The policies, obtained by The Intercept, govern the use of “Zionist” in posts not only on Facebook but across its subsidiary apps, including Instagram.

Both Facebook and Instagram are facing allegations of censorship following the erratic, widespread removal of recent posts from pro-Palestinian users critical of the Israeli government, including those who documented instances of Israeli state violence.

Mass violence has gripped Israel and Gaza since last week. Tensions kicked off amid Palestinian protests against planned evictions in occupied East Jerusalem to make way for Jewish settlers. Eventually, Israeli security forces stormed the Al Aqsa mosque compound in Jerusalem’s old city, one of the holiest sites in Islam. The Palestinian militant group Hamas responded with rocket fire aimed at Israel. Israel, in turn, unleashed massive aerial bombardments and artillery attacks against the occupied Palestinian Gaza Strip, reportedly leaving more than 120 people, including 20 children, dead. At least 900 Palestinians have been injured since Monday. Reports said that in Israel, seven people, including a soldier and a child, had died as a result of the violence, with more than 500 injured.

“Facebook claims that their policy on the word ‘Zionist’ is about Jewish safety,” Dani Noble, an organizer with Jewish Voice for Peace who reviewed the rules, told The Intercept. “But, according to their content policy excerpt, it seems Facebook decision-makers are more concerned with shielding Zionist Israeli settlers and the Israeli government from accountability for these crimes.”

Though none of Facebook and Instagram’s content removal has been tied conclusively to the term “Zionist,” users and pro-Palestinian advocates were alarmed by disappearing posts and notices of policy violations over the last week. Facebook said the sudden deletion of deeply disturbing content documenting Israeli state violence was, as the company so often claims, just a big accident. Company spokesperson Sophie Vogel, in an email to The Intercept, blamed the deleted posts, many about the recent attempts to seize Palestinian homes by Israeli settlers, on an unspecified “wider technical issue” within Instagram and on a series of “mistaken” deletions and “human error.”

Another spokesperson, Claire Lerner, said, “We allow critical discussion of Zionists, but remove attacks against them when context suggests the word is being used as a proxy for Jews or Israelis, both of which are protected characteristics under our hate speech policy.” She added, “We recognize the sensitivity of this debate, and the fact that the word ‘Zionist’ is frequently used in important political debate. Our intention is never to stifle that debate, but to make sure that we’re allowing as much speech as possible, while keeping everyone in our community safe.”

Facebook did not provide comment about when the rules were implemented and the apparent contradiction with its public statements that such a policy was still under consideration and not being actively used.

While some Palestinians’ Facebook and Instagram posts have simply vanished, suggesting a technical problem of some sort could plausibly be the cause, many others reported receiving a notification that their posts were removed because they violated company rules against “hate speech or symbols.” Those alleged violations constitute just one of many prohibitions drawn from a library of internal Facebook documents that ostensibly dictate what’s permitted and what should be deleted for the company’s multibillion-person audience.

Though the company claims its content decisions are increasingly made automatically by machines, Facebook and Instagram still rely on legions of low-paid contractors around the world, left to delete or preserve posts through a mix of personal judgment calls and the application of byzantine rule books, flow charts, and hypothetical examples. Facebook has previously dissembled on the question of whether it would add “Zionist” to a master list it maintains of protected classes of people, telling Palestinian activists at a virtual conference in March that it had made “no decision” on the matter. “We are looking about whether in some certain limited contexts, is it is accurate to consider that the word Zionist may be a proxy for Jew in some certain hate speech cases,” Facebook’s human rights chief Miranda Sissons told the Palestine Digital Activism Forum. This does not appear to be entirely true. (Sissons could not be reached for comment.)

A portion of one such internal rulebook reviewed by The Intercept walks Facebook and Instagram moderators through the process of determining whether posts and comments that make use of the term “Zionist” constitute hate speech.

One Facebook moderator said the policy “leaves very little wiggle room for criticism of Zionism” at a time when precisely that ideology is subject to intense scrutiny and protest.

“Zionism,” strictly speaking, refers to the movement that advocated historically for the creation of a Jewish state or community in Palestine and more recently for the nation that emerged from that push, Israel. A Zionist is someone who participates in Zionism. Though “Zionist” and “Zionism” can be fraught terms, deployed at times by flagrant antisemitic people as a wink-and-nod synonym for “Jew” and “Judaism,” the words also have unequivocal historical and political meaning and clear, legitimate, and non-hateful uses, including in the context of criticism and discussion of the Israeli government and its policies. In the words of one Facebook moderator who spoke to The Intercept on the condition of anonymity to protect their job, in practice the policy “leaves very little wiggle room for criticism of Zionism” at a time when precisely that ideology is subject to intense scrutiny and protest.

The policy text on “Zionist” is only a brief section of a much larger document that walks moderators through the process of identifying a wide variety of protected classes and associated hate speech. It provides moderators with instructions “to determine if ‘Zionist’ is used as a proxy for Israeli/Jew” and thereby subject to deletion. Facebook says it does not currently consider “Zionist” a protected class on its own. It reads as follows:

What are the indicators to determine if “Zionist” is used as a proxy for Israeli/Jew?

We use the following Indicators to determine Proxy for Jew/Israeli:

1. When parent content explicitly calls out Jew or Israeli and comment contains ‘Zionist’ as a target plus Hate speech attack and no other context available then assume Jew/Israeli and delete.

In scenarios of visual or textual designated dehumanizing comparisons where there are references to “rats”, should the references to Zionist(s) be considered as a proxy for “Jew(s)”?

Yes, only in these scenarios please consider “Zionist(s)” as a substitute to “Jew(s)” and action appropriately.

Critics noted that the first example is tied to a frequent and often violent real-world event — seizures of Palestinian homes by Israeli settlers — almost always carried out with justifications rooted in ideological Zionism or Israeli government policies themselves rooted in Zionism. The advocates who question Facebook’s rules on the term “Zionist” worry they would collapse denunciations of such action and state policies into hate speech against Jews, making it difficult to criticize Israel online at all.

“The absurdity, futility, and politicized nature of Facebook’s policy should be as clear as day right now, as we witness continued ethnic cleansing in occupied Jerusalem, and a new war on the besieged population of Gaza,” said Dima Khalidi, director of Palestine Legal, an advocacy group. “The fundamental problem is that Zionism is a political ideology that justifies exactly the kind of forced expulsion of Palestinians — making some Palestinians refugees 3-times over — that we’re seeing right now in Sheikh Jarrah and other occupied East Jerusalem neighborhoods.”

Critics said Facebook’s decision to zero in on “Zionist” as an ethnic identity elides the fact that it describes a concrete ideological choice and ignores how Palestinians and others have come to use the word in the context of their historical repression by Israel. This focus inhibits the very political discourse and protest throughout the world that Facebook claims it’s protecting, according to Jillian York, the Electronic Frontier Foundation’s director for international freedom of expression and a longtime critic of Facebook’s moderation practices. “While ‘Zionist’ is used as a self-identity, its use by Jews and others (including many Evangelical Christians) demonstrates that it’s not purely a synonym for ‘Jewish’ as Facebook has suggested,” York told The Intercept. “Further, its use in the region is different — Palestinians use it as a synonym for ‘colonizer’, not for ‘Jew.’” The policy constitutes a form of ideological “exceptionalism” around Zionism, according to York, a treatment not provided to other political identities like socialism or neoconservativism “as the result of political and other pressure.”

Though Facebook said that no Instagram posts about the recent Israeli violence were removed at the request of the Israeli government, the country routinely makes such requests to the largely compliant company. And brigades of loosely organized pro-Israel volunteers, many coordinating through the smartphone app Act.IL, participate in mass-reporting campaigns that can essentially trick Facebook’s automated moderation systems into flagging nonviolent political speech as hateful incitement. The company declined to comment on the record when asked about evidence of mass-reporting campaigns.

The existence of the “Zionist” rules comes as a surprise to Palestinian advocates who say Facebook previously created the impression that limits on using the term “Zionist” were being considered within the company but not actually implemented. “We were led to believe that they are considering this policy and therefore they were consulting with civil society,” Marwa Fatafta, Middle East and North Africa policy manager for Access Now, told The Intercept. Fatafta noted that she was asked to provide feedback on the possibility of such policy in 2020, whereas the document containing the rules indicates the rules on “Zionist” were released to moderators in 2019.

After reviewing the policy for herself, Fatafta said it reflects precisely the concerns she held when it was posed to her as hypothetical. “Zionism is a politically complex term that requires nuance,” she told The Intercept. “There is no way for Facebook to moderate such content at scale without their systems running amok, curtailing legitimate political speech and silencing critical voices.”

This content originally appeared on The Intercept and was authored by Sam Biddle.