On April 1, a mural appeared in the Southern Italian city of Naples, depicting Palestinian workers lining at an Israeli military checkpoint near the occupied city of Bethlehem, in the West Bank. It is called ‘Welcome to Bethlehem’.

The mural, which quickly became popular in the town and on social media, was the work of a well-known Italian artist and photographer, Eduardo Castaldo.

Castaldo, who is a cinematic and television photographer, is not your typical artist, as he dedicates part of his time and efforts to championing struggles for human rights, equality and justice, especially in Palestine and throughout the Middle East.

It is only befitting that Castaldo is from Naples, a Southern Italian city with deep historical and cultural connections with Palestine and the Arab world. As Italian culture had itself influenced the Arab world, numerous markers of Arab culture can also be detected in Naples, from the Neapolitan dialect to music and dance, to food and much more.

Moreover, Naples, itself, is a symbol of the Italian resistance. The September 1943 uprising, known as “Le Quattro Giornate di Napoli” – Four Days of Naples – was a watershed moment in the history of the city as it liberated itself from Nazi German occupation.

Castaldo’s mural of the Palestinian workers is not his only work on Palestine and the Middle East. He has done other artistic displays. Moreover, he has spent years in Palestine working as a photojournalist.

We spoke to the Italian artist to understand his connection with Palestine and the Arab world, his inspirations and his ongoing fight against injustice in all of its forms.

“This work originated from my experience as a photo reporter in the Middle East,” Castaldo said in reference to ‘Welcome to Bethlehem’.

Castaldo worked as a photojournalist in Palestine for about four years, from 2007-2011. These years allowed him to immerse himself in the Palestinian experience and to “directly witness the cruel dynamics of Israeli military occupation.”

“I visited the Bethlehem checkpoint several times, where I took many photos. My street artwork is a collage of photos that I took at the time,” he tells us.

“That was a particularly harrowing experience,” Castaldo reflects:

I was standing outside the checkpoint bars, taking pictures of Palestinian workers between ages 30 and 60, even 70, piled on top of one another for hours to cross the checkpoint and reach Jerusalem to work. These people repeated this same routine every day, from as early as 4 AM to 8 AM. And every day, they were forced by circumstances to suffer that same dehumanizing experience, simply to earn meager amounts of money (to feed their families).

Castaldo felt “uncomfortable being a Western photojournalist, outside of the bars, taking pictures” of entrapped Palestinian workers. He explains the reasons behind his uneasiness:

These people were already deprived of their dignity and I didn’t feel I had the right to take photos of them as if they were animals in a zoo. This feeling was so unpleasant that I decided not to show or sell those pictures to newspapers.

But that feeling didn’t depart Castaldo’s conscience; in fact, it grew “stronger and stronger” to the point that Castaldo quit photojournalism altogether. Needless to say, those experiences in Palestine were imprinted in Castaldo’s mind until this day.

“After several years, around 2018, I decided to re-elaborate these photos and I turned them into something else entirely,” he says, explaining:

I put together 40-50 images in one single image, which won several awards, including the Sony World Photography Awards in 2018. Feeling the need to convey Palestinians’ painful experiences to the world, I transformed that picture into a street artwork. As an artist, that was my way to narrate that experience: both my feeling of discomfort and the humiliation and abuse that Palestinians were forced to suffer.

From Naples to Palestine

The Bethlehem mural is not the only street artwork that Castaldo dedicated to Palestine. In Via San Giovanni a Pignatelli, also in Naples, there is another breathtaking mural of a Neapolitan woman dumping a bucket of water at two Israeli soldiers who are trying to climb the wall.

Castaldo says that this work is, too, a “reconstruction of a photo taken during an Israeli military operation in Palestine”.

“The act of throwing water is quite common in Naples, especially by women who want to scare away kids when they are too loud in the street,” he says. “By associating this typical reaction with Israeli soldiers I tried to epitomize Naples’ solidarity with the Palestinian people. In my mind, that gesture became a symbol of anti-Zionist Naples.”

But Castaldo’s Palestinian inspiration exceeds that of the geographic boundaries of Palestine to Italy itself. “Subsequently, I decided to add an element to the Palestinian flag,” which is present in the mural, namely, a portrait of Ali Oraney, a Palestinian-Italian activist who has been living in Naples since the early 1980s and died from Covid-19 some months ago.

Like other artists, journalists and other visitors to Palestine, the human connection, for Castaldo, was far more powerful a rapport than books and news broadcasts. Spending time with Palestinians is usually the best answer to the dehumanization they suffer at the hand of mainstream media.

“Living in Palestine and the Arab world allowed me to create a strong bond with ordinary people living there, with their experiences, and with their daily struggles,” he says.

“I have made friends with many people there and I had the chance to experience some of these things firsthand, as a journalist and a human being. This is essentially what created my bond with the Palestinian people.”

We asked Castaldo whether he believes that art is capable of altering reality in any way.

As an artist “I have no illusion that my art can change things on the ground,” he says. “However, it is a way to offer my skills to what I perceive as important. It has undoubtedly a personal value to me. And I believe the political value of my artworks is intrinsically linked to the places in which they are set.”  Castaldo’s “ultimate goal is to connect the city of Naples, where I live, to this cause.”

On art, politics, and freedom, the accomplished Italian artist says:

I am perfectly aware that my art will not change such a dramatic political situation or have a key role, but I also think it can contribute because art is freedom. And, to me, it is important to point out that this freedom is not neutral, it has to stand on one side, on the right side.

Castaldo’s morally motivated and politically conscious artwork spans other areas and subjects beyond Palestine, although, at their core, all of these issues are connected.

Castaldo, who also worked as a photojournalist during the Egyptian revolution, dedicated another mural to Giulio Regeni, a young Italian scholar who was murdered in Egypt, presumably by Egyptian security forces.

The mural was not only dedicated to Giulio Regeni, but to the Egyptian situation as a whole, because Regeni was part of it. Moreover, my ultimate goal was not only to denounce the single violation against Regeni but the repressive system in Egypt in its entirety.

Castaldo is particularly happy that his artwork is very popular in the Middle East, where he continues to receive much support and accolades from the people and fellow artists in the region.

“Thanks to social media, my works are more popular in the Middle East than in Europe. And I have to say that their positive reactions, their support, and their solidarity make me proud,” he says.

Castaldo is not a typical artist. Ethics and morality play a crucial role in everything he does. He takes his inspiration from the people, and whenever possible, he exhibits his work also to the people. He feeds on the love and support he acquires from ordinary people, whether in Palestine or in Naples.

This artist of the people is on a mission to convey the kind of pain, suffering, and indignity that proud people often undergo in isolation. His art also tells the story of pride, beauty, and hope for a brighter future. 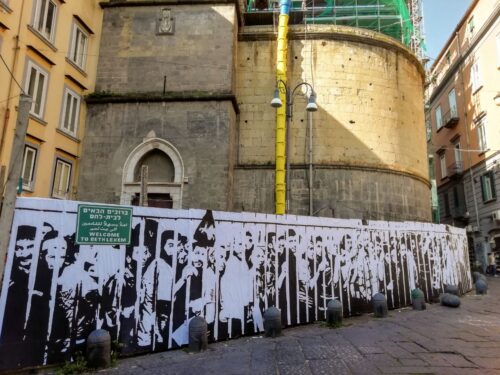 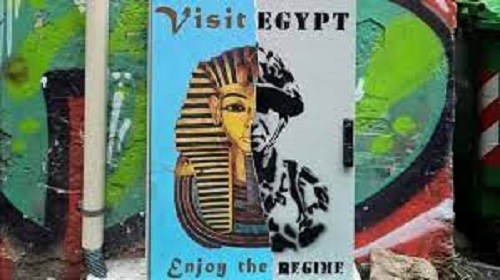 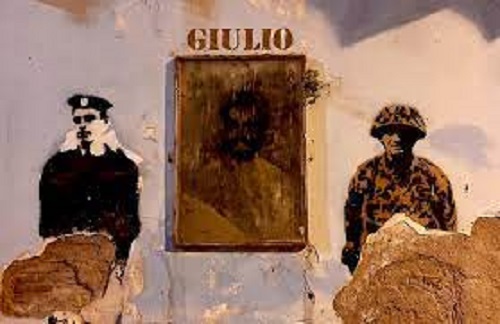 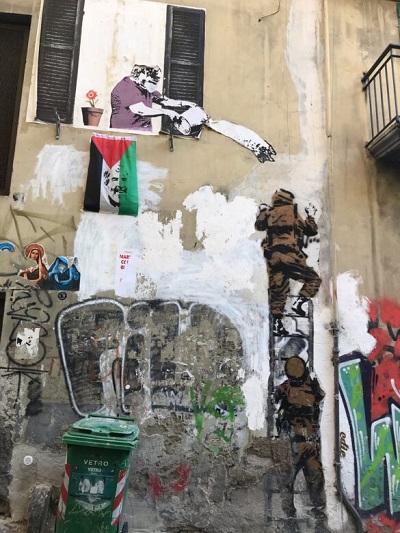 The post “Anti-Zionist Naples”: Award-Winning Italian Artist Speaks about Palestine and Why He Quit Photojournalism  first appeared on Dissident Voice.

This content originally appeared on Dissident Voice and was authored by Ramzy Baroud and Romana Rubeo.

By Ramzy Baroud and Romana Rubeo