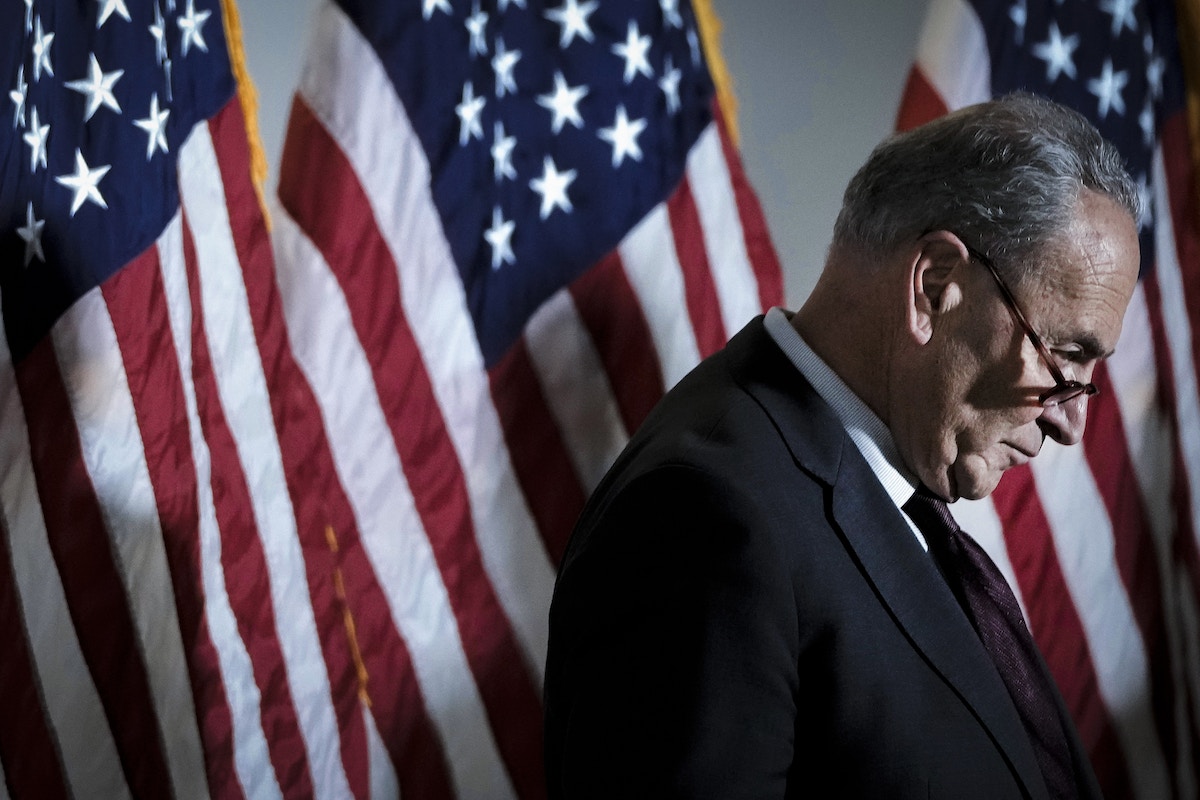 Chuck Schumer and Joe Manchin are locked in a voting rights standoff.

Senate Majority Leader Schumer, D-N.Y., shot down an effort from Sens. Manchin, D-W.Va., and Lisa Murkowski, R-Alaska, to focus narrowly on reauthorizing the 1965 Voting Rights Act, instead championing the For the People Act as the more immediate fix for systemic problems in the U.S. electoral system.

For the uninitiated: The For the People Act, also known as H.R. 1 in the House and S. 1 in the Senate, would amount to a sweeping overhaul of election and campaign finance law; the John Lewis Voting Rights Act, or H.R. 4, would work to re-implement Justice Department oversight of voting laws in states that have a history of voter suppression and discrimination.

Schumer dismissed the Manchin gambit in unusually blunt terms. “Here’s the bottom line: … The Voting Rights Act is actually authorized until 2032, so their letter to us saying authorize it, well, it’s pretty much done,” Schumer told reporters during a press conference Tuesday.

The necessity of revisiting the question of voting rights stems from a 5-4 Supreme Court decision in 2013, in which Chief Justice John Roberts gutted the Voting Rights Act of 1965 by striking down its key provision, known as preclearance, which mandated certain jurisdictions with histories of discrimination obtain approval from the federal government before they could change their voting laws. Stripping out preclearance allowed states to pass ever-expansive voter suppression laws.

“This decision effectively gutted one of the federal government’s most effective tools to preserve confidence in our nation’s elections, and we are seeing the results manifest themselves in state legislatures across the country,” Manchin and Murkowski, the lone Republican in support of reauthorization, wrote in a letter to leadership in Congress on Monday.

Manchin and Murkowski may have identified the problem, but their solution is untenable.

Experts say reauthorization of the Voting Rights Act would be insufficient to address the restrictions to ballot access that Republicans are cheering in the states. Put simply: Because the Roberts court has already struck down preclearance, it could easily do so again.

Roberts’s decision instructed Congress that if the legislature wanted to re-implement preclearance, it would have to build a strong case over time that the states where it would apply, concentrated in the South, were indeed engaged in discriminatory voter suppression. Convincing an average observer of that reality would not be difficult, but Roberts, in his 2013 decision, effectively declared racism over.

In order to re-implement the Voting Rights Act, Congress would either need to appoint new justices to the Supreme Court or go through the lengthy process of building a case to convince not just Roberts but at least one of his colleagues to his right. H.R. 4, which Manchin recently suggested Congress focus on in lieu of the For the People Act, is designed to build that lengthy case, specifically aimed at winning approval from the court.

The For the People Act, or H.R. 1, takes a more direct approach, simply outlawing many of the most effective suppression tactics. First passed by the House in 2019, it also mitigates the role of big money in politics and bars partisan gerrymandering — which by itself is potentially enough to give Republicans the House majority. (Title I of the bill, focusing on ballot access and countering voter suppression, was largely written by Lewis before he passed away last July, but the decision was made to add his name instead to the new voting rights legislation. Support grew for the 1965 Voting Rights Act after the brutal beating of civil rights demonstrators in Selma, Alabama, where Lewis had his skull fractured and nearly lost his life.)

Manchin, for his part, had suggested that the John Lewis Voting Rights Act could win enough Republican support to overcome a filibuster. But Republican leaders have quickly shot down Manchin’s proposal to focus on the John Lewis Voting Rights Act. Texas Sen. John Cornyn, the No. 2 Republican, guessed that no Republicans would sign on to Manchin’s proposal, and even if they did, the stacked Supreme Court would be unlikely to approve it, he noted to HuffPost last week. “That is a way to do through the back door what [the For The People Act] is trying to do through the front door,” he said. Cornyn’s estimate was off, as Manchin did manage to secure Murkowski’s signature on his proposal to focus on the Voting Rights Act, though finding nine more Republicans remains a long shot at best.

Schumer’s argument against concentrating on reauthorization is that, while good, the John Lewis Voting Rights Act is in no way a substitute for H.R. 1. The John Lewis Voting Rights Act’s long and legally circuitous timeline would also mean that it would do nothing about the voting rights laws being pushed in Georgia, Texas, Arizona, and Florida. H.R. 1, however, would directly override those new laws, along with the others implemented since Roberts cleared the way.

Manchin last week floated the idea of subjecting all 50 states to preclearance as a compromise for a wider embrace of the Voting Rights Act (again, Supreme Court hurdles make that approach seemingly impossible), but he skipped a Democrat caucus meeting last week where For the People Act sponsors made their pitch for the bill.

Sen. Chris Murphy, D-Conn., told The Intercept after the meeting that simply focusing on the Voting Rights Act alone would do nothing about the immediate onslaught of ballot restrictions enacted across the country by Republicans since the November election.

“It’s not sufficient to do anything about the attacks that are underway right now by state legislatures,” he argued.

He said the caucus heard from Democrats representing places like Georgia, Montana, and Wisconsin, where Republicans are looking to enact laws to preserve “election integrity” — which Murphy said was “bullshit” that stood in for an approach that amounted to stacking the deck. “They’d much rather have a group of elite, corporate billionaire-friendly folks running the government,” he said.

Democracy reform advocates say using this moment only to pass the John Lewis Voting Rights Act would squander an opportunity.

“HR4 without HR1 doesn’t make any sense to me, other than as pure symbolism. If the big bad wolf is going to blow your house in, you’d better build it out of brick. HR1 is brick. HR4 on its own is straw,” said Lee Drutman, senior fellow at New America’s political reform program and author of “Breaking the Two-Party Doom Loop.” Even if the John Lewis Voting Rights Act survived the Supreme Court, preclearance itself is less of a tool in such a polarized moment, he added. “I look forward to the Ron DeSantis DoJ handling preclearance in 2025,” he quipped, referencing a potential presidential run for the Florida governor.

Worse yet, said Lawrence Lessig, a professor at Harvard Law School, a dangerous possibility could be that Manchin actually does manage to get Republicans to cynically co-sponsor his approach. “The reason you see Republicans supporting HR4 is that they believe that this bill will be passed by Congress and kill HR1 but then be struck down by the Supreme Court and lead us back to where we are right now,” said Lessig, author of “They Don’t Represent Us: Reclaiming Our Democracy.” “The reality is, bipartisanship is not possible with the Republican leadership on voting rights reform because they are convinced the only way they maintain power is by preserving the ability of the states to make it harder for Democrats to vote.”