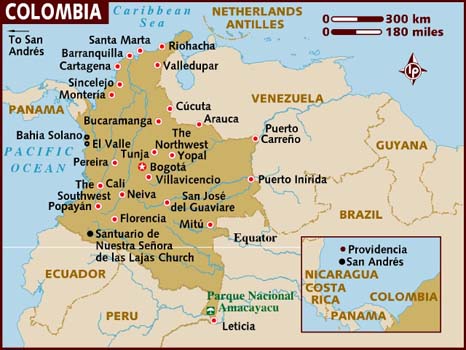 Colombia has been burning with the flames of resistance ever since a national strike began on April 28, 2021. The initial impetus for the large-scale demonstrations came from a regressive tax reform. The tax bill came into being due to the necessity of the Colombian state to push down the rising fiscal deficit, which could reach 10% of GDP this year. On top of this, the tight integration of the Colombian economy into the architectures of imperialism has resulted in an external debt of $156,834,000,000 (51.8% of GDP, projected to come up to 62.8%).

Someone had to pay for this crisis and the ruling class had no interest in doing so. This was demonstrated when the finance minister ignored the recommendations made by the state-appointed expert committee to tax the highest earners first. The attempt to make the workers and the middle layers pay for the crisis was the spark that ignited the masses’ accumulated rage.

The movement has slowly spread into the larger questions of political economy, openly confronting the structural barbarity of a glaciated plutocracy. This plutocracy has blood on its hands; it has amassed obscene amounts of wealth by relentlessly mowing down the resistance of the oppressed masses.

The modern history of Colombia is enveloped in vapors of violence. Between 1948 and 1958, the country was the scene of one of the most intense and protracted instances of widespread violence in the twentieth century. In this period, there was a civil war called “The Violence” between Liberal and Conservative parties which took 200,000 lives. In order to bring an end to civil war, the Conservatives and Liberals made a political pact in 1958, known as the National Front (NF) which established that the presidency would alternate between the two parties for a period of 16 years and all positions in the three branches of government would be distributed evenly between them. Despite this, violence continued until 1966.

NF barred the Colombian Communist Party (PCC) from conventional political process in 1955 to ensure that its rising popularity was curtailed. In this way, NF helped in the alternation of power between the different factions of the Colombia elite while strengthening the armed forces to suppress popular reforms. After the civil war, capital accumulation consolidated, agri-business interests grew stronger and land concentration increased. Suffocated by the brutal vehemence of blood-tainted profit-making and hamstrung by the closure of traditional channels of opposition, PCC formed the Revolutionary Armed Forces of Colombia – People’s Army (FARC-EP) on May 27, 1964, as its armed wing.

Between 1984 and 1988, the FARC-EP agreed to a ceasefire with then President Belisario Betancur and many of its militants opted for electoral politics by forming a mass-based political party, the Patriotic Union (UP).  In all, UP gained 12 elected congressional members, 21 representatives to departmental assemblies, 170 members of city councils and 335 municipal councilors. Before, during, and after scoring these substantial electoral victories in local, state, and national elections, the military-backed death squads murdered three of the UP’s presidential candidates.

Over 5,000 legal electoral activists were killed. The FARC-EP was forced to return to armed opposition because of Colombian regime-sponsored mass terrorism. Between 1985 and 2008, tens of thousands of peasant leaders, trade unionists, human rights activists, and neighborhood leaders as well as journalists, lawyers, and congress people were killed, jailed, or driven into exile. As is evident, whenever ordinary Colombians have stood up for life, the governing political caste and the ruling economic class have systematically tapped into the vast power of state terror to chop off any hope for a better future.

Even today, the same practice of deploying ever greater amounts of violence continues. The director of Human Rights Watch believes that the protests in Colombia have seen a level of police violence previously unknown in Latin America. He claims that on this continent he has never seen “tanks firing multiple rounds of tear gas projectiles, among other things, horizontally at demonstrators at high speed. A most dangerous practice”.

The Colombian elite’s construction of repressive apparatuses has been fundamentally aided by the American empire. Colombia has been witness to a US-sponsored counter-insurgent nation-building project aimed at contesting the rapid expansion of rural guerrillas on Colombia’s endless coca frontier, its mining and energy frontiers, its agro-industrial frontiers, and into most of its towns and even cities. This project has turned out to be purely destructive.

By the end of the 1990s, there were more than 400 paramilitary massacres annually. Enter US-backed Plan Colombia, ostensibly designed to cut cocaine production in half: 80% of it went to the Colombian police and armed forces, who worked with the paramilitaries against the FARC, or, more often, against the Colombian people who lived in areas where guerrillas were active. From 2006 to 2010, the Colombian armed forces disappeared more than 10,000 civilians and disguised them as guerrilla kills to boost the body count.

Propped up by a bloated, national security state, the political class became totally dysfunctional, making no move to implement the 1991 Constitution, whose provisions on indigenous autonomy became dead letters. Such was the mockery of the electorate’s existence that the passage of the constitution was preceded by record numbers of indigenous deaths.

The war machine’s dispossession, disappearance, torture, and massacre of indigenous people left no community untouched. The Afro-Colombians in the Pacific, who had secured provision to collective land title in 1993, following the indigenous model of autonomy through communal land tenure, suddenly found themselves in the thick of death and destruction as their lands were coveted by mining and logging companies as well as drug traffickers-cum-ranchers-cum-paramilitaries.

Today, Colombia continues to be the stooge of USA, being the largest recipient of American foreign aid in Latin America, and the largest outside of the Middle East. In 2020, Congress appropriated over $460 million in foreign aid, with most of the funds being directed towards “peace and security,” which includes providing training and equipment to security forces. This has translated into the build-up of massive police and military forces that are unleashed against the civilian population whenever the need comes to enforce the neoliberal model.

On November 24, 2016, the Government of Colombia and FARC-EP signed a peace agreement, the “Final Agreement for Ending the Conflict and Building a Stable and Lasting Peace”. However, this promise of peace has proven to be full of contradictory tensions. Insecurity and inequality continue unabated, despite the promise of stability, inclusiveness and state responsiveness. There can be little prospect of a meaningful or sustainable peace if large sections of society remain vulnerable to violence, insecurity, injustice and other harms.

However, an entirely elitist architecture of governance has been a part and parcel of Colombia’s history.  Whether it is conflict or “peace”, all types of political periods have been utilized by the agribusinesses, extractive industries, large-scale landowners and rural elites to enrich themselves. Meanwhile, the marginalized have been exposed to further violence and insecurity. The calcified cruelty of this system reached such a level that the subjugated pole could no longer keep quiet; it had to take to the streets to reassert its right to live with dignity.

Since Duque came to power in 2018, Colombians have led fierce social struggles: student-led demonstrations against corruption and state terror over three consecutive months in 2018; a nationwide strike of teachers, students, farmers and pensioners in support of public education and pensions in April 2019; “March for Life” demonstrations by students and teachers in response to escalation in assassinations of activists and opposition politicians by neo-paramilitaries and police in July 2019; nationwide general strikes against austerity policies and the cover-up of a military-headed bombing campaign that killed at least eight children in the department of Caquetá; and the mass demonstrations that erupted during the first wave of the COVID-19 pandemic in September 2020 against police violence. In the current conjuncture, resistance will continue as the heavy fist of neoliberal authoritarianism disrupts the existence of the majority of the people.

The post Colombia’s Rebellion against the Capitalist System first appeared on Dissident Voice.

This content originally appeared on Dissident Voice and was authored by Yanis Iqbal.