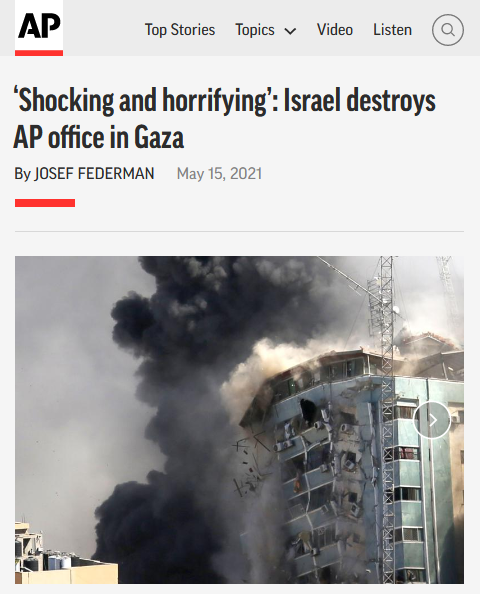 AP (5/15/21) reporting on the Israeli military’s destruction of its Gaza offices.

The Israeli government’s targeted destruction of a Gaza building housing offices of the AP and Al Jazeera has seemingly brought a new dimension to the latest military action against Palestinians.

Free press advocates slammed the action, and the Israeli government’s defense that the building was a Hamas military installation was met with eye-rolling skepticism—Hamas denies this (Intercept, 5/17/21), the US State Department claims it hasn’t seen evidence of this (Axios, 5/17/21) and AP president and CEO Gary Pruitt (AP, 5/16/21) said, “We have had no indication Hamas was in the building or active in the building.” Such an attack on two prominent news agencies is a sign that Israel seeks to stifle information coming out of Gaza, but also, as Israel’s political center of gravity moves sharply to the right, a sign that the nation is at war not just with its occupied population, but with the notion of a free society itself.

This is not the first such attack on media offices Israel has carried out in Gaza. In the fall of 2012, according to the Committee to Protect Journalists, “Israel conducted a series of strikes that injured at least nine journalists and damaged several offices,” including an attack on “Al-Shawa and Housari Tower, which is home to Al-Quds TV…. Khader al-Zahhar, a cameraman for Al-Quds TV, lost his right leg in the explosion” (11/19/12).

This latest incident is an escalation of Israel’s harsh treatment of journalists and human rights activists, both inside the Green Line and in the occupied territories, for the last several years. For example, Israeli forces shot and killed Ahmed Abu Hussein of Gaza’s  Al-Shaab radio station, and Yaser Murtaja of Ain Media, while they covered protests in 2018 (Reuters, 4/25/18). Reporters Without Borders ranked Israel 86th in the 2021 press freedom index, after Gambia and before Haiti. A few incidents showing Israel’s growing hostility toward journalists and other observers:

The list goes on. In the current crisis, Israeli forces injured and arrested several journalists before the attack on the AP and Al Jazeera building (Committee to Protect Journalists, 5/14/21) and injured eight journalists covering protests in Jerusalem (CPJ, 5/11/21). Mark Stone of Sky News (Twitter, 5/18/21) reported that Israeli police manhandled a CNN crew, in a scene that he said was now typical. 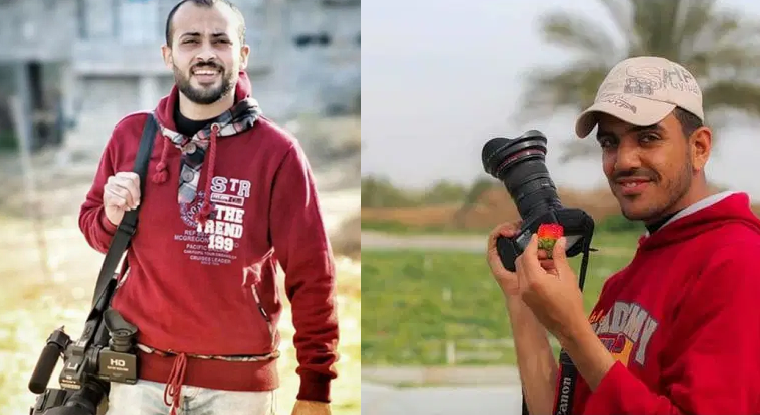 Central to hasbara—public diplomacy to promote Israel in a positive light—is the notion that mainstream corporate media are inherently skewed to the pro-Palestine narrative. There are several organizations—like Honest Reporting and CAMERA—devoted to painting the media as pro-Palestine. Israel advocates often disregard gruesome footage of military assaults on Palestinians as “Pallywood” (Palestine plus Hollywood), which they say involves “media manipulation, distortion and outright fraud by the Palestinians…designed to win the public relations war against Israel” (Jerusalem Post, 10/11/07). The idea goes that Palestinian activists know that an old Arab woman throwing a stone at a Merkava tank or a child rescued from the rubble are the kinds of “David and Goliath” images that journalists are hungry for, and that activists are eager to provide them.

Israel’s public relations advocates hold that the nation is not simply at war with terrorist organizations, but with an entire apparatus of human rights organizations, academic institutions, media outlets and the United Nations that is dedicated to treating Israel unfairly. And that sentiment has intensified as the country, which prides itself as the “only democracy in the Middle East,” faces a crisis of legitimacy. Two major human rights groups, Human Rights Watch (4/27/21) and B’Tselem (1/12/21), have accused Israel of administering an “apartheid” regime. The country has held five national elections since 2015, and the Knesset still can’t resolve who is in charge of the government. Rabbi Meir Kahane’s fanatical religious party was banned in Israel—but his ideology is now a viable force (AP, 5/14/21).

Journalists who cover the Middle East historically have considered Israel and the occupied territories as a safer place to work than, say, Syria or Yemen. But if a country’s parliamentary structure weakens and it becomes more authoritarian, its tolerance for the press will only shrink. In this context, the attack on the AP and Al Jazeera doesn’t just indicate a military willing to indiscriminately set targets in a densely populated area (as harrowing as that is), but that it has broadened its enemies list to include a larger set of democratic norms, like a free press and international cooperation.

Blaming the destruction of media outlets’ offices on dubious claims of Hamas controlling the building, Israel thinks it has a “get out of jail free” card for what would otherwise be a war crime. But the linkage also signals that the Israeli government sees journalists themselves as somehow embedded with the dreaded enemy. Reporters who continue to work in the territory will be branded as associates of a combatant group, which compromises their safety, discredits their work and discourages reporters from taking on the job.

The rest of the world will be worse off, and the Israeli government will get more of what it wants: darkness, and freedom from outside scrutiny.