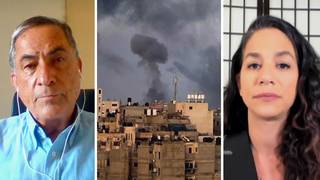 A Palestinian man in a wheelchair, his pregnant wife and 3-year-old daughter are among the latest victims in Israel’s ongoing bombing campaign in Gaza, which is now in its 11th day. Israeli airstrikes and shelling have killed at least 231 Palestinians, including 65 children, and health officials say 1,700 Palestinians have been wounded. Over 1,300 housing units have been completely demolished or severely damaged. Israeli Prime Minister Benjamin Netanyahu has so far rejected calls for a ceasefire, but Hamas officials say a truce could be reached within a day. President Joe Biden’s defense of Israel’s bombing campaign in Gaza is a continuance of unconditional U.S. government support of Israel, says Israeli journalist Gideon Levy. “When will be the stage in which the world or the American president will say, 'Enough is enough. This is not self-protection'?” We also speak with Noura Erakat, Palestinian human rights attorney and legal scholar, who says the shift in rhetoric and support for a free Palestine among some lawmakers and people in the U.S. is significant and “reflects years of movement work on the ground.”