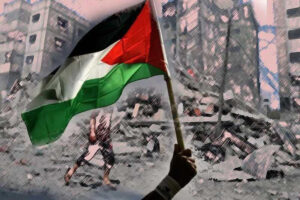 If winning a military battle is defined by the accomplishment of one’s military objectives, then Hamas won the current round of violence with its very first ballistic barrage on Jerusalem ten days ago. Israel, on the other hand, won’t win, can’t win and doesn’t even dream of winning. Like in recent ‘rounds’, all Israel hopes to achieve is an ‘image of victory.’ Despite its military might and destructive enthusiasm, Israel can’t prevail militarily because it doesn’t even remember what military objectives are or what they look like.

In the last seven decades Israel has worked relentlessly to divide the Palestinians in an attempt to dismantle their ability to resist as one people. This project had been so successful in the eyes of the Israelis that many of them started to believe that the Palestinian cause had evaporated into thin air. But then, completely out of the blue (as far as the Israelis are concerned), Hamas managed to unite the Palestinians into a unified fist of resistance: on Tuesday every Palestinian between the River and the Sea joined a strike called by Hamas. Such a collective, multi-sectorial strike didn’t happen in Palestine since 1936.

Military victory is not measured by the carnage you inflict on your foe. It isn’t measured by the number of casualties or the residential towers one reduces into dust. Admittedly, there is no room for comparison between Israeli military capabilities and Hamas’ firepower. Israel is one of the most technologically advanced military forces in the world. Hamas is decades behind, yet it wins over Israel in every round of violence.

The reason is simple. Hamas’ military objectives are simple and modest. Hamas has vowed to keep the resistance alive. It fulfills its promise. By achieving this goal Hamas has positioned itself as the Palestinian unifier. Israel, on the other hand, can’t decide its military goals. We hear Israel’s Defence Minister vowing to bring security to the Israelis but Hamas proves him wrong, continuing to rain Israel with rockets at a growing rate. Israel brags about its precision bombing of Hamas’ tunnels, yet rather cynically, Hamas keep operating from tunnels that seem intact and operational.

It doesn’t take a military genius to grasp that in order to stop Hamas, Israel needs to deploy ground forces and to engage in a fierce battle in the streets of Gaza. But this is exactly the one thing the IDF refuses to do and for a manifold of very good reasons. Firstly, the Israelis are fearful of a house-to-house battle. Second, Israel doesn’t want to control 2.5 million Gazans. Third, not one Israeli military leader is willing to face the relentless Israeli mothers brigade. In the region, however, Israel’s reluctance to send foot soldiers to Gaza is understood as cowardice and weakness.

For Israel, Gaza in particular and Palestine in general is a no-win situation.

But there is a deeper reasoning behind Israel’s hopeless situation. Israeli decision makers (both within the political realm and in the military) subscribe to the power of deterrence. For Israelis, the power of deterrence means punishing the Arabs so heavily that their will to fight would practically stop existing. For one reason or another, the Israelis manage to clumsily zigzag through their troubling history in the region in an attempt to validate this doctrine. For instance, Israel works hard to convince themselves that despite their military fiasco in Lebanon in 2006, Hezbollah has been reluctant to enter a new round of violence with Israel because it is intimidated by the consequences.

Examination of Israeli history actually defies the Israeli doctrine. When Arabs are defeated and humiliated in the battlefield they keep fighting until they win. When Arabs win, they often lose their motivation to keep fighting. They occasionally seek peace and harmony in accordance with the Islamic teaching.

In 1967 Israel defeated 3 Arab armies in just 6 days. Israel performed a perfect Blitzkrieg operation. The Israeli air force surprised and destroyed the Egyptian, Jordanian and Syrian air forces on the ground in less than four hours. Simultaneously, Israeli Panzers raided into Sinai, within hours the Egyptian forces collapsed. The humiliation of the Egyptian army was unprecedented in military terms.

If the Israeli doctrine carried any validity, Egypt wouldn’t consider any military confrontation with Israel. But the reality on the ground proved the opposite. Just a few months after their June 1967 defeat, the Egyptian Army launched a war of attrition against Israel, one which exhausted the Israeli forces (including the air force). In the War of Attrition (1967-70) Egypt displayed new capabilities, relying on new Soviet ground-to-air missiles that obliterated Israeli air superiority. Yet Israel refused to draw the necessary conclusions. It was suffocated by hubris that prevented it from reading its neighbors and their intentions.

On 6 October 1973 (Yom Kippur) at 2 PM, Egypt and Syria launched a coordinated attack on Israeli forces in the Suez Canal and in the Golan Heights. Within hours the two Arab armies managed to obliterate the Israeli defence lines. A few days later and thanks to a close American airlift Israel recovered. It gained its lost land in the occupied Golan heights and even managed to conquer some new territory in Syria. In the South, Israel managed to establish a bridgehead over the Suez Canal. It encircled the Egyptian 3rd army and cut its supply lines. But Israel failed to push the Egyptian 3rd and 2nd armies back. The Egyptian army ended the war, claiming a narrow strip of Sinai back. It was this victory that empowered Anwar Sadat to launch a peace initiative four years later (1977).

Hafez al-Assad, the Syrian leader at the time, didn’t manage to claim a victory. Syria remained a defiant enemy of Israel. It is reasonable to speculate that if Assad was allowed to cling to some of his territorial gains in October ‘73, Israel and Syria could have proceeded into further reconciliatory talks.

The same logic can be applied to Hezbollah. The Lebanese Shia resistance movement is reluctant to fight Israel not because it is afraid of the consequences, as Israelis delude themselves, but because it already won significantly over the IDF. A war with Israel is dangerous for Hezbollah not because Israel will do its best once again to destroy Lebanese infrastructure and flatten half of Beirut, but because the outcome of such a war is unknown. Hezbollah is in a much better position retaining its status as the Arab military force that made the IDF run home with its tail between its legs (2006).

One may wonder whether Israeli strategists are so thick as not to grasp the most obvious facts about their neighbors and what fuels their motivation to fight. It may of course be possible that Israel’s decision makers aren’t as excited by tranquility as some of us want to believe. Gaza is where Israel tests its new weaponry and tactics. Gaza rockets are a necessary ingredient in the Iron Dome’s public relations. Most importantly, the Gaza crisis emerged when Netanyahu’s political options were running out. It was the Gaza current conflict that made the political powers in Israel subside and then crystalize lucidly within the realm of the hard right. This war made both Netanyahu and Hamas stronger.

It would be fair to argue that Hamas is operating within the modernist perception of conflicts as devised by Carl von Clausewitz. For the German military philosopher “war is the continuation of politics by other means.” In ‘postmodernist’ Israel, it seems war is one of the means that keeps some politicians out of prison.

The post The Image of Victory first appeared on Dissident Voice.

This content originally appeared on Dissident Voice and was authored by Gilad Atzmon.