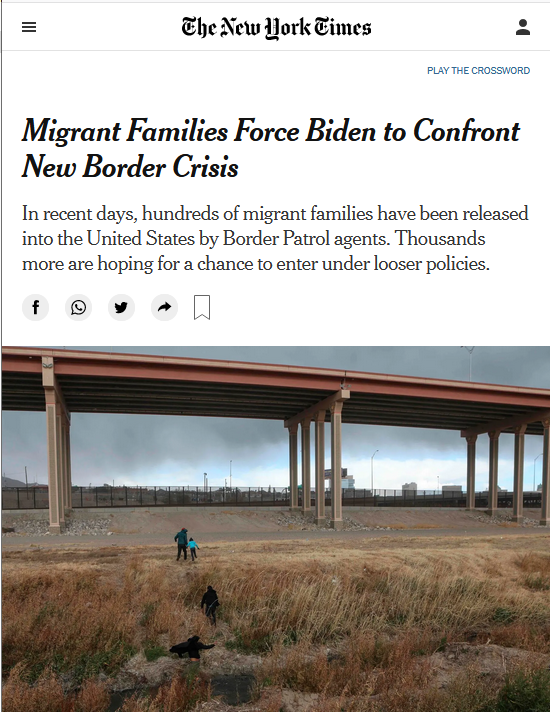 It’s no surprise that right-wing media have hyped a supposed crisis on the US/Mexico border, or that much of the television coverage of current immigration issues has tended to be superficial. What’s striking is how badly the situation has been represented in the more centrist and prestigious parts of the corporate media.

Human Rights First, an advocacy organization that has been monitoring conditions at the southwestern border, has described current media coverage as “unethical reporting.” The group wasn’t just talking about Fox News and Sunday talkshows: The outlets it singled out were the New York Times, Washington Post and Axios.

“Unethical reporting” is no exaggeration. Probably the media’s greatest failure has been in playing down a major humanitarian crisis on the other side of the border: the US government’s expulsion of thousands of asylum seekers back into Mexico under Title 42 of the public health code. Aside from some good opinion pieces (Washington Post, 3/22/21; Boston Globe, 4/26/21), there have been little more than a few passing references to this Trump era policy, which the Biden administration is continuing (with some modifications). But we find a serious lack of balance even if we only consider the reporting about the situation on the border’s US side.

Establishment coverage has featured hyperbole about recent migration trends and an inexcusable lack of historical context. Worse yet, this style of reporting could have serious consequences in the real world: It may sabotage prospects for a long overdue reform of the US immigration system. 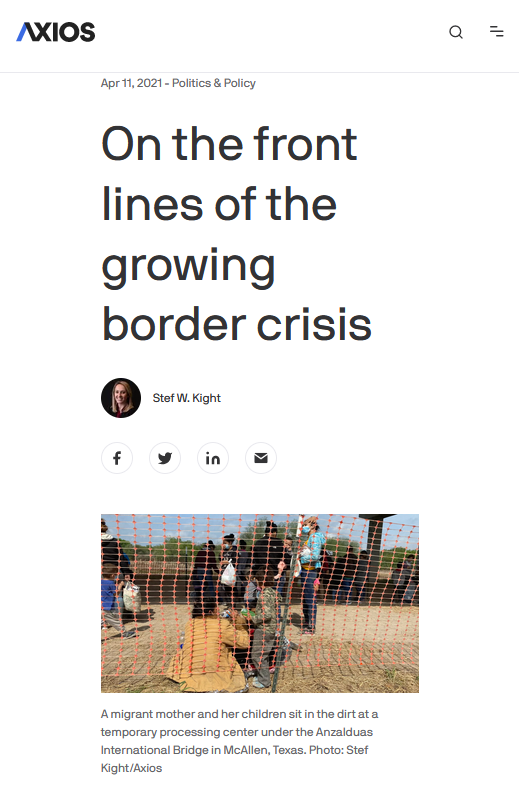 The media’s crisis narrative was in place by early February. “President Biden’s first immigration crisis has already begun, as thousands of families have surged toward the southwestern border in recent weeks, propelled by expectations of a friendlier reception,” the New York Times (2/6/21) announced. “The surge poses the first major test of Mr. Biden’s pledge to adopt a more compassionate policy along America’s border with Mexico,” Times reporter Miriam Jordan and freelancer Max Rivlin-Nadler continued.

The article clarified that the situation at the border wasn’t much different from a spike under the Trump administration in 2019, and that a policy change in Mexico could be as much the cause as any “compassion” from the new administration. Both Jordan and Rivlin-Nadler (who reports for San Diego’s KPBS) are in fact good reporters with a firm grasp on immigration issues. Still, their choice of language—words like “crisis,” “surge,” “propelled”—seems designed to scare more than inform.

The Washington Post’s coverage has the same problem. The paper’s Nick Miroff, a knowledgeable immigration reporter, can’t seem to resist scary rhetoric. For Miroff, the number of migrants crossing the southwestern border hasn’t just increased; it has “skyrocketed” (4/2/21). Overcrowding in Border Patrol facilities isn’t just an administrative failure; it’s “a ballooning crisis for the Biden administration” (3/12/21).

Over at Axios (4/11/21), Stef Kight sprinkles an otherwise informative article with military imagery. “Parents with young children march through the brush,” she wrote. The increase in migration is a “surge,” and Kight was reporting from “the frontlines of the growing border crisis,” according to the headline.

What’s missing from this is any sense of history. Casual readers may not realize that reporters like Miroff have been crying wolf for years. Border crossings also “skyrocketed” at least twice in 2018 in articles under his byline (9/30/18) or under a shared byline (12/13/18)—and yet no one now seems to remember a major “border crisis” that year.

…or politics as usual? 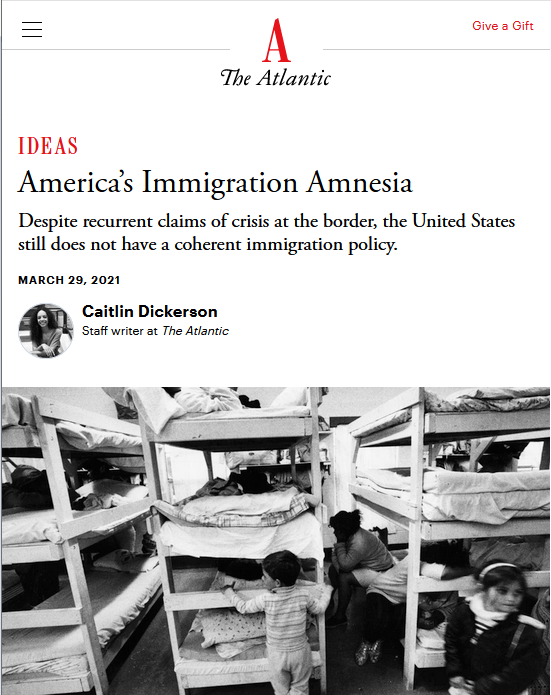 Caitlin Dickerson (Atlantic, 3/29/21): “Moments at the border like this should by now be considered almost routine, but our collective short-term memory—sometimes exacerbated by media hyperbole—allows elected officials to capitalize on them for their own political gain.”

Much of the media focus at the beginning was on the confinement of unaccompanied minors in unsafe and unsanitary Border Patrol facilities. This was a serious problem, but a solution wasn’t hard to find. As former New York Times reporter Caitlin Dickinson noted in March (Atlantic, 3/29/21), the federal government could have handled this if officials hadn’t been “unwilling to spend the money required to process children more safely and comfortably, because of a concern about optics.” In fact, the problem eased dramatically once the Biden administration put resources into addressing it: The average number of minors held by the Border Patrol fell by 88% from March to end of April (CBS, 5/3/21).

So in what sense does this year’s increase in border apprehensions constitute a crisis?

News articles have emphasized the fact that border encounters for March and April were at the highest level since 2000 (Washington Post, 5/11/21), but the differences between now and then are rarely mentioned. The number of Border Patrol agents has nearly doubled since the early 2000s, the agency’s budget has tripled, and most of the 650 miles of barriers now at the border were constructed after 2000. The total monthly border apprehensions may be similar, but migrants have much less chance of eluding today’s outsized enforcement apparatus. The undocumented population grew by more than a million in 2000; it’s hard to imagine that there will be anything of like that kind of population growth now.

Media reaction was much more measured 20 years ago, however. References to border crises in the New York Times were as likely to be about the Balkans or the Middle East as Texas or Arizona, and a prominent editorial that year was entitled “A Quieter Immigration Debate” (7/23/00). The piece remarked that Al Gore and George W. Bush, the two major-party presidential candidates at the time, were

making overtures to immigrant communities that may provide the swing vote in California, Texas, Florida and New York. But they are doing so in an atmosphere far calmer than in the mid-1990s, when immigrant-bashing was in vogue.

The immigration debate has clearly become more partisan since 2000, with “immigration-bashing” now defining Republican positions. The result is that any perception of a border crisis turns into a talking point for the Republicans—and a problem for the Democrats.

This is what the media coverage reflects. A careful reading shows that when centrist reporters write about a crisis on the border, they generally mean a political crisis for the Biden administration, not a crisis for the majority of people in the United States, and certainly not the crisis being experienced by migrants themselves. 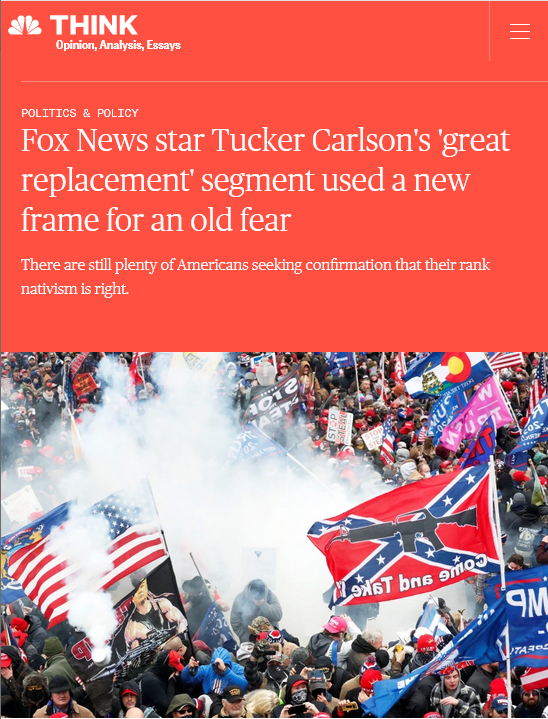 But for many news consumers, the phrase “border crisis” conjures up fears about unauthorized immigrants that the right has been fomenting for decades—that they are criminals, that they use up medical and social services, that their numbers are huge and swelling. And the media have done a poor job of countering these myths. The undocumented are actually much less likely to be convicted of crimes than the US-born, are barred from using most government benefits, and only represent 3% of the population (Forbes, 3/10/21), with the number decreasing since 2008. But the average US citizen is unaware of these facts.

So on one side, we are subjected to extreme and inaccurate accounts from Fox News, where Tucker Carlson (4/8/21) feels free to rant that “the Democratic party is trying to replace” current US citizens “with new people, more obedient voters, from the Third World” (Guardian, 4/12/21). On the other side, we get mainstream corporate reporting that may be technically accurate, but misleads with references to “surges,” “skyrocketing” numbers and a “ballooning crisis.”

According to an analysis by the Pew Research Center, immigration was the third biggest topic in major media during Biden’s first 60 days, after the economy and healthcare. Pew rated the coverage of the administration’s handling of immigration as much more negative than positive.

There are already troubling signs of what this can do to public attitudes. Support for a more humane immigration policy was high earlier this year (Vox, 2/4/21), and attitudes towards immigration in general had been improving over the last two decades, with the tendency probably intensified by revulsion against the Trump administration’s punitive policies. The trend may have reversed recently. In late March, Politico’s Morning Consult poll (3/24/21) found that support for legalizing undocumented immigrants already living here had fallen by 14 points since January, from 57% to 43%.

“What’s likely happening here,” Politico reporters remarked, “is that the GOP’s messaging on the border surge is starting to bleed into other aspects of the conversation on immigration.”

The earlier increase in backing for immigrants didn’t come out of nowhere. Tens of thousands of immigrant activists had worked for decades—sometimes at great personal risk—to bring about the shift in public opinion, creating the best chance since 1986 for a positive immigration reform. All this work could be threatened if corporate media persist with unbalanced coverage.

This content originally appeared on FAIR and was authored by David L. Wilson.