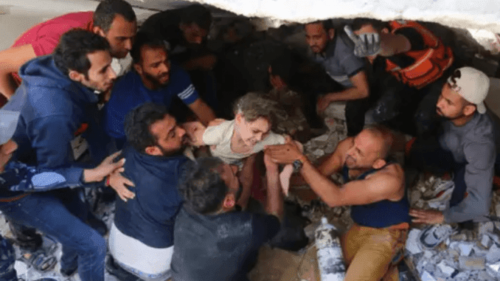 Imagine if the BBC reported:

BBC Middle East editor Jeremy Bowen referred night after night on BBC News at Ten to ‘a war between Israel and Hamas’, a version of events pushed hard by Israel. As John Pilger said in a recent interview, ‘Bowen knows that’s wrong’. This is no war. In fact, the world has witnessed a massive attack by one of the world’s most powerful, lethal militaries, armed and supported to the hilt by the US (which sends $3.8 billion in military aid to Israel each year) and western allies, imposing a brutal occupation and deliberately subjecting the Palestinian civilian population to death, violence, terror and appalling hardship.

Médecins Sans Frontières (MSF) warned early on that heavy Israeli bombing was pushing Gaza to the edge of catastrophe:

‘The Israeli bombing is incredibly heavy and stronger than previous bombing campaigns. Relentless bombing has destroyed many homes and buildings all around us. It’s not safe to go outside, and no one is safe inside, people are trapped. Emergency health workers are taking incredible but necessary risks to move around.’

On 19 May, the 10th day of intense Israeli bombardment of Gaza, the BBC News website carried headlines:

So, why was Israel killing so many noncombatants, including children? Why were residences being flattened? The United Nations estimated that Israel had demolished 94 buildings in Gaza, comprising 461 housing and commercial units. Why were hospitals and clinics suffering so much damage? And buildings where media organisations were based?

Why were there Israeli airstrikes in the area of the MSF clinic in Gaza City, killing at least 42 people including 10 children? An orphanage was also destroyed.

The massacre was ‘one of the most horrific crimes’ Israel has committed during its ongoing war against the people of Gaza, according to Euro-Med Human Rights Monitor who added that:

‘the attack was not an isolated incident, but another example of Israel’s systematic policy that we have witnessed over the past six days.’

As Tamara Nasser observed in a piece on the Electronic Intifada website, Israel was unable to substantiate its claim that ‘Hamas military intelligence were using the building’ when pressed to do so by US public radio network NPR.

‘Even if that Israeli claim were true, under the laws of war, Israel’s destruction of entire buildings would be wholly disproportionate.

‘Rather, Israel’s mass destruction of buildings and infrastructure appears to fit the pattern of the Dahiya Doctrine – named after its 2006 destruction of the southern suburb of Beirut.

‘The goal is to deliberately inflict such pain and suffering on the civilian population and society at large as to deter anyone from resisting against Israel’s occupation. This can be prosecuted as a war crime.’

It also serves as a useful definition of terrorism.

‘What the Israeli army asserts, namely that the alleged presence of Hamas in the buildings would make them legitimate military objectives is absolutely false from a legal point of view, since they also house civilians, such as the media.’

‘Even assuming that the Israeli fire was necessary (which is absolutely not proven), the total destruction of the buildings demonstrates that the principles of distinction and proportionality have been flagrantly violated.’

Indeed, RSF sent a letter to Fatou Bensouda, chief prosecutor of the International Criminal Court, urging an investigation of Israel’s targeting of the offices of 23 media organizations in Gaza during Israel’s bombardment.

‘False Equivalence Between Occupier And Occupied’

Gregory Shupak wrote in a piece for Fairness and Accuracy In Reporting, the US-based media watchdog, that corporate media coverage presented a ‘false equivalence between occupier and occupied’. He continued:

‘The fatal flaw in the “both sides” narrative is that only the Israeli side has ethnically cleansed and turned millions on the Palestinians’ side into refugees by preventing them from exercising their right to return to their homes. Israel is the only side subjecting anyone to apartheid and military occupation. It is only the Palestinian side—including those living inside of what is presently called Israel—that has been made to live as second-class citizens in their own land. That’s to say nothing of the lopsided scale of the death, injury and damage to infrastructure that Palestinians have experienced as compared to Israelis, both during the present offensive and in the longer term.’

‘Now, the essentials of that conflict are not going to change. Until they do, there will be more trouble in the future.’

But Israeli settler-colonialism, ethnic cleansing, lethal sanctions maintained by a brutal military occupation, apartheid, the killing and imprisonment of Palestinian children, Israel’s constant trampling of international law, and the daily humiliation of Palestinians constitute ‘trouble’ right now regardless of what happens ‘in the future’. These essential truths are regularly unmentioned or glossed over by Bowen, the BBC and the rest of a ‘mainstream’ media trying to ‘normalise the unthinkable’, by presenting violent occupation as a ‘clash’ between two sides competing for legitimacy.

As Abby Martin noted in a video powerfully rebutting the Israeli claim that Hamas uses ‘human shields’ in Gaza:

‘Israel has intentionally made Gaza unliveable. The only way Gaza is able to exert pressure on Israel is by firing rockets. If they peacefully protest their conditions, they’re massacred just the same. If they do nothing, Israel continues to blockade them, erode their living conditions while ethnically cleansing the rest of their land.’

This perspective – the Palestinian perspective – is almost entirely absent from news coverage. Moreover, WikiLeaks has revealed that when Israel’s forces invaded Gaza in 2009’s ‘Operation Cast Lead’, they  – Israel – did actually use Gazans as human shields. A classified US cable reported that Israeli soldiers:

‘testified to instances where Gazans were used as human shields, incendiary phosphorous shells were fired over civilian population areas, and other examples of excessive firepower that caused unnecessary fatalities and destruction of property.’

‘No person, neighbourhood or area in Gaza is immune [from airstrikes]’

Hamas is regularly presented by corporate media as some kind of monster, a terrorist organisation with a declared intention of destroying Israel. This is a ‘convenient’ misrepresentation, as explained cogently in a recent interview with Frank Barat by Imad Alsoos, a research fellow at the Max Planck Institute, who is an expert on Hamas.

‘There’s been a whole attempt to make Hamas the centre of the reporting. And that’s nonsense. As if Hamas is a peculiar demon. In fact, Hamas and its military wing are part of a resistance; a resistance that was provoked by the Israelis. The real demon in this is Israel. But it’s not simply Israel. I mean, this is as much a British and American war against Palestine, as it is an Israeli one.’

Pilger added that this is a war:

‘against the people of Palestine who are doing one thing – and that is exercising their moral and legal right to resist a brutal occupation.’

It is rarely mentioned in the ‘mainstream’ media that Hamas is, as Pilger pointed out, the legitimately elected government of Gaza. Moreover, Hamas has repeatedly declared its readiness to negotiate a long-term ceasefire with the Jewish state within its pre-1967 borders. But Israel has always rejected the offer, just as it rejected the Arab League peace plan of 2002; and just as it has always rejected the international consensus for a peaceful solution in the Middle East. Why? Because the threat of such ‘peace offensives’ would involve unacceptable concessions and compromises. Israeli writer Amos Elon has written of the ‘panic and unease among our political leadership’ caused by Arab peace proposals.1

The Palestinians are seen as an obstacle by Israel’s leaders; an irritant to be subjugated. Noam Chomsky commented:

‘Traditionally over the years, Israel has sought to crush any resistance to its programs of takeover of the parts of Palestine it regards as valuable, while eliminating any hope for the indigenous population to have a decent existence enjoying national rights.’

And, as Chomsky noted:

‘The key feature of the occupation has always been humiliation: they [the Palestinians] must not be allowed to raise their heads. The basic principle, often openly expressed, is that the “Araboushim” – a term that belongs with “nigger” or “kike” – must understand who rules this land and who walks in it with head lowered and eyes averted.”2

In 2018, when Palestinians were being shot dead by Israeli soldiers in peaceful weekly ‘Great March of Return’ protests near Gaza’s border, Israeli journalist Gideon Levy observed that:

Given all of the above context, it is criminal that, day after day, BBC News presented a false balance between a powerful Israeli state-occupier and a brutalised, ethnically cleansed, apartheid-suffering Palestinian people. This systematic misrepresentation of reality amounts to complicity in Israel’s vast PR campaign to ‘justify’ its war crimes, brutality and repression of Palestinian people.

As well as Bowen’s wilfully distorted reporting for BBC News, and the biased coverage by corporate media generally, Pilger pointed to the lack of dissent in the UK Parliament in the face of atrocities being committed once again by Israel. He focused particular attention on:

‘Starmer’s Labour party which allowed pro-Israel groups to direct the policies of the Labour party, that, in effect, support this attack. When you have the Shadow Foreign Secretary saying that to criticise Israeli atrocities is antisemitic, then we’re in Lewis Carroll world, really.’

Chomsky once wrote of an elderly Palestinian man demonstrating in Gaza with a placard that read:

‘You take my water, burn my olive trees, destroy my house, take my job, steal my land, imprison my father, kill my mother, bombard my country, starve us all, humiliate us all but I am to blame: I shot a rocket back.’

This simple but devastating message, said Chomsky, is ‘the proper context’ for ‘the savage punishment of Gaza.’

It is a context that is almost entirely missing from corporate media coverage of Israel and Palestine, not least by BBC News.

This content originally appeared on Dissident Voice and was authored by Media Lens.