Janine Jackson interviewed Voting Booth’s Steven Rosenfeld about the Arizona audit for the May 21, 2021, episode of CounterSpin. This is a lightly edited transcript. 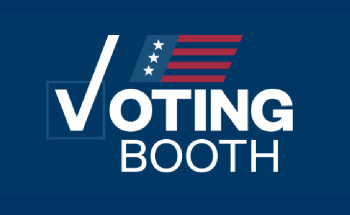 A test of sorts is underway now in Arizona, where the state senate is auditing votes from Maricopa County. (That’s where Phoenix is.) And that’s after previous audits found that, yes, the county and the state did go for Joe Biden—or “Fraudulent Joe Biden,” as, for example, Arizona state Sen. Wendy Rogers refers to him.

It’s easy for many of us to sort of check out on what might seem like a backwater dispute, but we have, hopefully, learned that it’s best not to sleep on state-level actions that can have meaningful impacts. One person with both eyes on Arizona is Steven Rosenfeld. He’s editor at Voting Booth, a project of the Independent Media Institute. He joins us now by phone from San Francisco. Welcome back to CounterSpin, Steven Rosenfeld.

Steven Rosenfeld: I’m delighted to be here. Thank you.

JJ: I know for sure that most people don’t know what’s happening in Arizona. They think, to put it crudely, “OK, they’re recounting because their guy lost. But—their guy lost. So let them waste their time as they will.” It’s damaging to the extent that it reifies the perception that there were major flaws in the 2020 election (though somehow just the presidential part). But still, it’s just denialists spinning their wheels.

Your reporting suggests that that might be taking it too lightly. So I would ask you to explain: What’s happening in Arizona, and why are you concerned about it?

SR: Sure, yes. So I cover not just voting rights, but what’s called “election administration,” and these are the details of how elections are run. And that means, at the front end, who gets to vote; and then it means how votes are counted; and then it also means how they’re double-checked.

So what’s happening in Arizona, just as you described, is that the Trump supporters basically have not wanted to accept the results. And what’s happened is, the state senate there basically went to court and did something that most of the Trump campaign lawyers did not do, which is: they won.

And they won the right to examine all of the ballots and the voting machines in the state’s largest county, which is Maricopa, which is Phoenix. And then they brought in a bunch of outside firms that were run by people who were pro-Trump, tweeting pro-Trump stuff, and they have had minimal or no experience with elections, recounting votes, or understanding how things are inventoried and counted. And they basically have been looking for problems to bolster the claim that the election was stolen.

And the thing about this is, they’re not certified by the federal government as firms that have election expertise. It’s basically a privatized, partisan effort that they hope to take to other states. But they’ve gotten more traction in Arizona because the state senate there, which is a majority Republican senate, has basically given them the power to proceed.

JJ: Again, you’re saying they’re private, so they’re not government-sanctioned folks, they’re private entities that have been brought in, and not brought in for expertise in doing anything like this ever before?

SR: Yes. So what’s happening is, I was able to get in and observe on the floor of this old coliseum in the western part of Phoenix, because there are a handful of progressives who want to help these Republicans figure out and believe what can be trusted in elections. And I won’t go there—

SR: —but they brought me in. 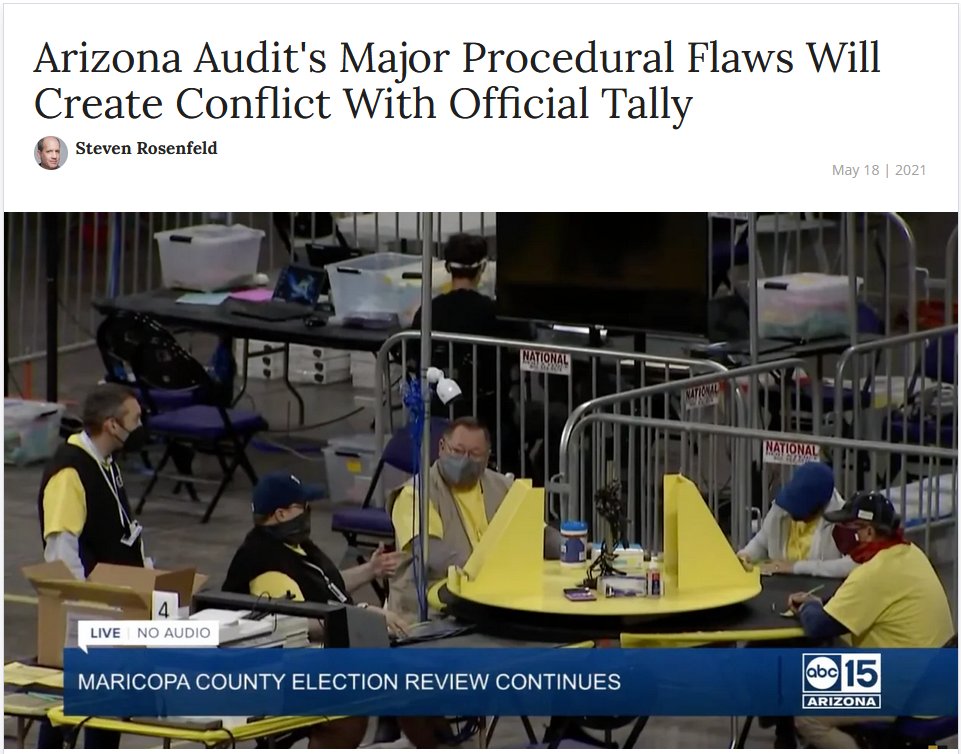 So I was on the floor for several days, watching up close. And what they’ve done is, they have several different audits or investigations underway. Some of these you’ve heard about, like they’re looking through microscopes at paper ballots to see if any of the fibers in the paper are from China, because there’s this conspiracy theory that 40,000 ballots were snuck in at night, which is completely unfounded, and other people are doing work that has actually disproven that, but that hasn’t gotten widely out.

But the main thing they’re doing is counting ballots by hand, and they’re doing it in such a way that they are not cross-referencing the subtotals. So we’re talking 2.1 million ballots. They’re not cross-referencing the subtotals you get from the different batches with the official county numbers, or inventory. And there are other election records as well, which are digital images of every ballot, because they’re scanned.

So as a result, they don’t have controls that you would normally have to spot errors. Sometimes if you go to recounts, people will recount stuff by hand several times before they get to an agreed-upon total. So not only are these folks just doing it once, and they’ve never done it before, and they don’t have things to cross-reference it to, when they get to the finish line, they’re putting all their tally sheets into a spreadsheet, and nobody is copying the tally sheets—or they weren’t when I was there—and nobody is cross-referencing them or checking to see if there are typos.

And we’re talking about thousands and thousands of sheets with numbers being put into a giant spreadsheet. So of course you’re not going to get a result that matches the official results, and you probably can’t delve in and pinpoint where there were mistakes or divergence and build a case on that.

So that’s what’s going on. Does that make sense?

JJ: Yeah, it makes sense to say that what might be delivered is a murky, confusing thing in which people will be able to decide whatever they want to about it, and that’s the problem, yeah?

SR: It’s really, really simple. If you think about recounting votes, it’s like balancing a checkbook: You don’t want to estimate: “Oh, I thought I had this much in the bank.” You have to go line by line, or vote by vote, or ballot by ballot, and account for it all. So these folks were so interested in ripping open these boxes of paper ballots, they had no idea how physical ballots were organized or inventoried, or looking at documents from the county to cross-check that, and they’re just kind of pushing ahead.

And even though they want to be taken seriously, and they have all the attitude and all the appearances and all the optics, when it comes to actually accounting for votes and looking at ballots where, you know, “This was not clear, somebody circled an oval or they smudged it or spilled coffee,” they have no procedures to account for all of that stuff and document it back to the ballot in question. And we’re talking 2.1 million of these. 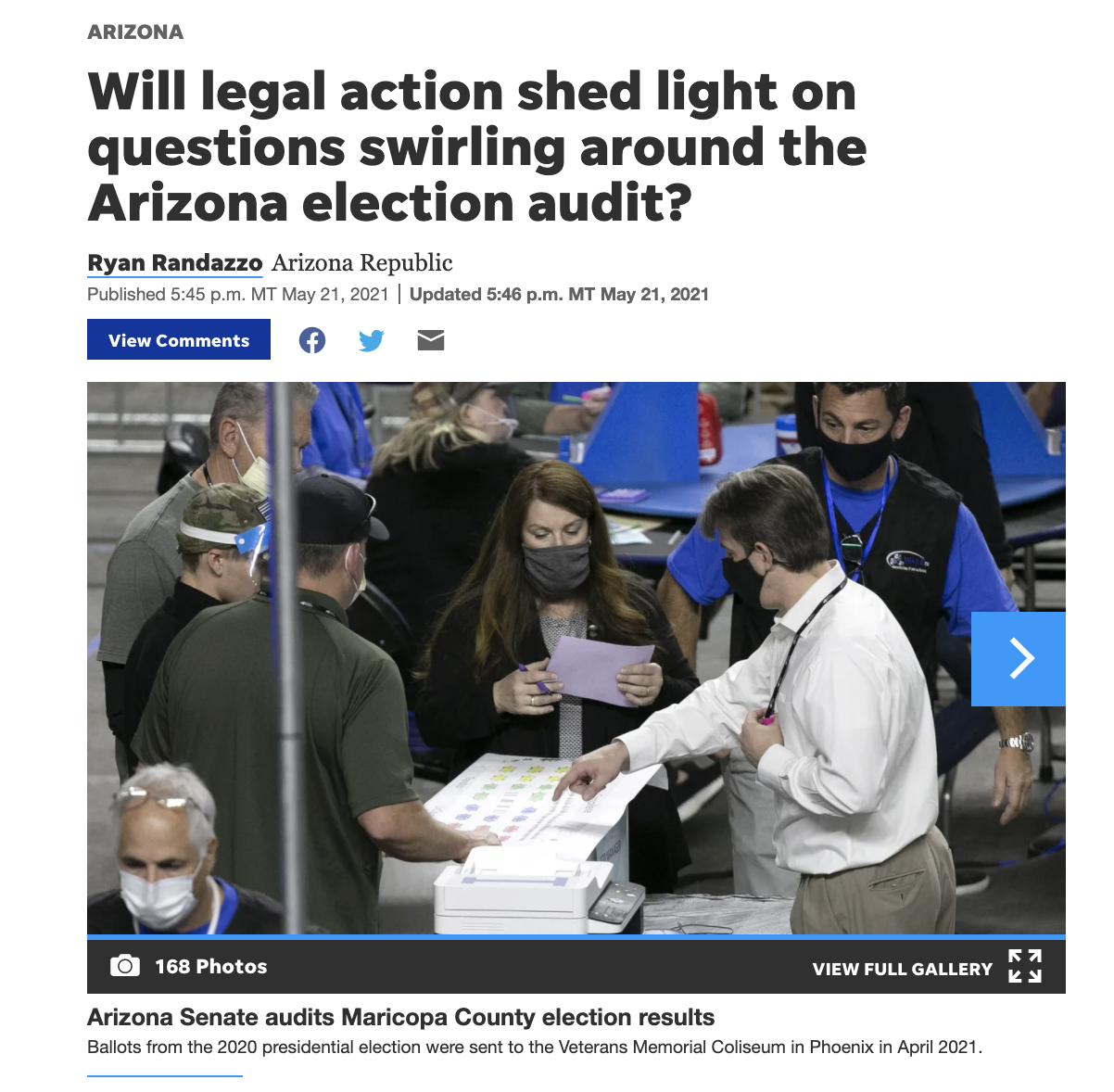 SR: So that’s kind of what’s going on, is that, at that level, they’re new to this. So they’re discovering things as they go. And, you know, you don’t start learning about elections in presidential contests. You do it locally and it takes a number of years, but that’s a whole ‘nother thing.

JJ: And then the whole point of it is that it’s meant to be, in terms of optics, “Let’s add more transparency.” You know, “Given that some people believe”—which is the argument that we’re told—”some people thought that maybe the process was flawed.” So this is meant to be adding transparency.

And yet, as the Arizona Republic said, the contractors who’ve been assigned to this audit have declined to name or have failed to specify everyone who had access to the information and the materials and who’s paying for the work. So even the Arizona Republic local reporters are unable to get basic information about who’s even doing this audit, and yet the language is all about transparency.

SR: Yeah, well, here’s the big takeaway on that, and this is my perspective of having been a reporter who has covered election administration. Now these are the details that either suppress votes or include votes, exclude [votes]. The process that government-run election officials use, after Election Day, is not sufficiently simple or easily understood by the public, so that the people on the losing side can accept the results. It’s very technocratic. And it’s unfortunate, because what ends up happening is, you end up creating a vacuum that’s filled with all the conspiracy, the B-movie plotline. 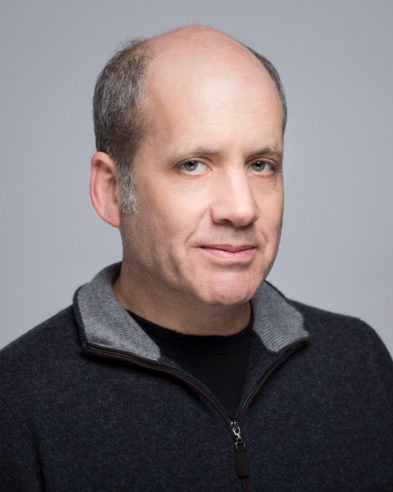 Steven Rosenfeld: “There’s a bit of a vacuum in government-run election processes that’s opaque, and allows the conspiracy theories to trickle in.”

SR: And what’s really unfortunate about this is when you take a look at all the legislation that’s being passed, and—whether it’s in blue or red states—this year, 2021, people are not taking a look at using, or even acknowledging, that there’s better underlying data and records to go really far upstream and reconcile, as an accounting process: What were the votes? And were they counted accurately?

So that is a part of this, too. If you want to ask the question: Why does this narrative just keep going, why doesn’t it stop? It’s because there’s a bit of a vacuum in government-run election processes that’s opaque, and allows the conspiracy theories to trickle in.

SR: What these people are doing, the contractors that are brought in by the Arizona senate, is they are basically trying to develop a business model, where they can take it to other states and they can basically have Republican partisans, where they have majorities in their legislatures, say, “We don’t trust government-run elections. We want you to hire our private guys to go in months afterward.” And it just keeps perpetuating the doubt, and perpetuating that maybe the people in power are illegitimate.

And so that’s the business model. I heard them talk about this. They literally said, “We expect this process to be common in many states in a couple years.” And by the way, this handcount is going to cost $3.4 million. And I heard that from the people who are organizing it. And the state senate has only appropriated $150,000 for this; the rest is all private donations.

JJ: Wow. OK. Yep. So it’s a business model, and they’re going to run it wherever they can. 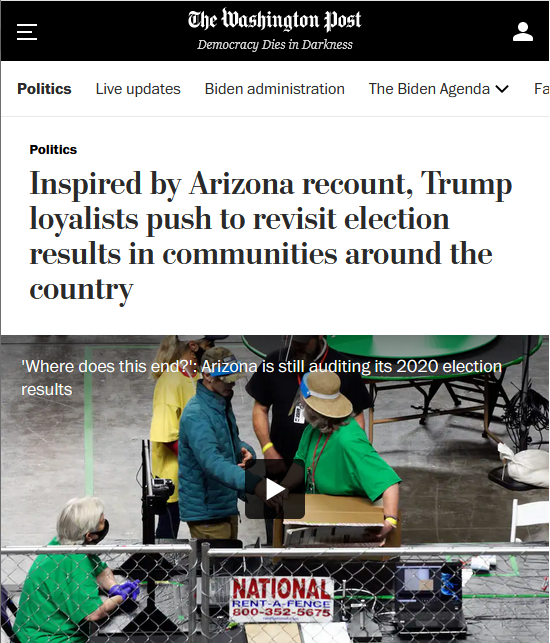 SR: You now see groups of Trumpers in Michigan, in California—this has been reported in the Washington Post—where they’re trying to lean on local election boards or counties to hire these same folks who have no experience.

And the bottom line is, if you take a look at elections where there are recounts, there’s almost been no election that I know of, going back decades, when the margin was more than 1,000 votes, that recounts overturned it. So these states where Biden won by 10,000, 12,000 votes, there’s no precedent for that. It sounds small, when 2 or 3 million people vote, but it’s not when it comes to recounts and overturning results, historically speaking.

JJ: All right, then. Well, we’re gonna pick it up later, clearly, because we’ll need to, but we’ll end it here for now. We’ve been speaking with Steven Rosenfeld. He’s editor of the Voting Booth project at the Independent Media Institute, online at IndependentMediaInstitute.org. Steven Rosenfeld, thank you so much for joining us this week on CounterSpin.