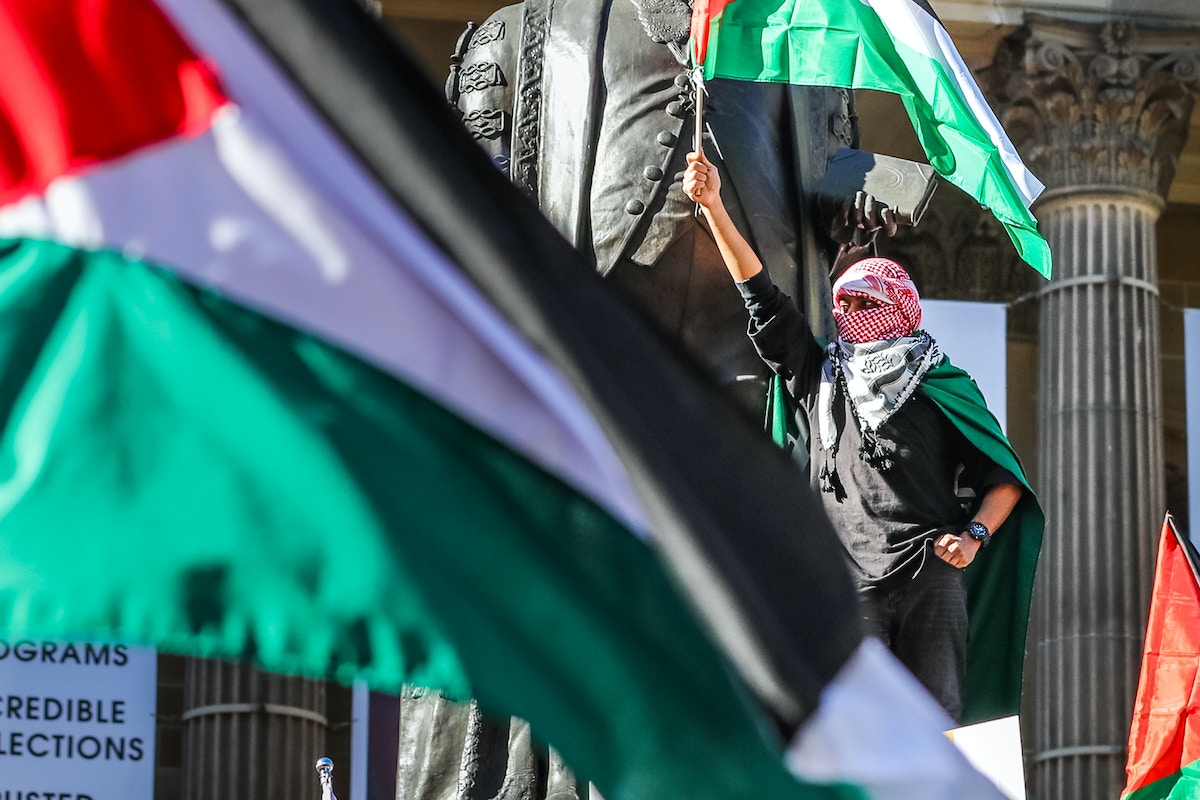 Journalists in Australia are facing backlash after asking their newsrooms to improve coverage of Israel and Palestine.

Five journalists in Australia published an open letter on May 14 calling on news outlets to “do better” coverage of Israel and Palestine by actively including Palestinian perspectives in coverage and refraining from “both-siderism that equates the victims of a military occupation with its instigators.” More than 720 journalists and media staffers have since signed the letter criticizing coverage of the fighting between Israel and Hamas. Israel has killed over 240 Palestinians, 66 of them children, and has left parts of Gaza completely destroyed, including a tower that housed offices for the Associated Press and Al Jazeera, among other media and nongovernmental organizations. Hamas, meanwhile, has killed 12 Israelis, including two children.

Already some of those journalists have faced consequences. At least a dozen staffers at two of Australia’s largest public broadcasting corporations, Special Broadcasting Service and Australian Broadcasting Corporation, were asked by management to remove their signatures from the letter, according to letter organizers and the Media, Entertainment & Arts Alliance, an Australian media union. Several staffers at both SBS and ABC said they were also told that their contracts might not be renewed.

“The people who are being particularly pressured are younger journalists, and often people of color, and people who are from an Arab background,” said Antony Loewenstein, a journalist based in Sydney, Australia, and previously in East Jerusalem who helped organize the letter. “There’s not a suspicion of Jewish journalists doing their job, whereas there is for Arab journalists,” added Loewenstein, who is Australian and Jewish.

“There’s not a suspicion of Jewish journalists doing their job, whereas there is for Arab journalists.”

“We recognise a growing dissatisfaction, both in this country and elsewhere, with the media’s treatment of Palestine,” the authors of the Australian letter wrote. “Many of us are seeking change but lack sufficient power in our organisations to push back against the status quo. We believe that the coverage of Palestine must be improved, that it should no longer prioritise the same discredited spokespeople and tired narratives, and that new voices are urgently needed.”

The authors asked that newsrooms “consciously and deliberately make space for Palestinian perspectives” and avoid “frameworks that rely on passive formulation and weasel words (clashes, etc) to obscure the reality of a violence disproportionately endured by Palestinians.” Authors also asked that employers respect the rights of journalists and other staff “to publicly and openly express personal solidarity with the Palestinian cause without penalty in their professional lives.”

The Media, Entertainment & Arts Alliance contacted SBS on Friday after hearing reports from journalists who were pressured to remove their names from the letter. “It is a principle of freedom of speech that journalists have a right to express views about their profession and the industry. Signing an open letter of this type is simply choosing to take part in a legitimate discussion about journalism and the media,” MEAA said in a statement Friday. The union said it had advised SBS “that any disciplinary action resulting from this expression of journalistic freedom will be strongly resisted by MEAA, and are seeking an urgent clarification of the broadcaster’s position.”

Reached for comment, MEAA said it was aware of isolated incidents of ABC management contacting staffers who had signed the letter. “There has been no formal disciplinary action taken against any staff warranting further official intervention by the union at this stage,” MEAA communications director Mark Phillips said. “However, our position would be the same should management of any media outlet, commercial or government owned, threaten journalists with disciplinary action for signing the letter.” The union was not aware of incidents where people at SBS or ABC had been told their contracts might not be renewed but acknowledged that different people might interpret a stern call from management in different ways.

Staffers at the Guardian Australia represented by MEAA also issued a statement Friday standing in support with colleagues at SBS who had faced backlash for signing the letter. “Guardian Australia MEAA members were appalled to hear reports this week that staff members at SBS have been pressured to remove their signatures from an open letter urging balanced coverage of Palestinian perspectives in the current Middle East conflict,” they wrote. “Journalists are routinely subjected to pressure and intimidation regarding support for Palestine. This intimidation directly conflicts with the media code of ethics, as it prevents journalists from exercising their right to express a political identity that is distinct from their employer without penalty in their working lives. As union members, we oppose attempts to intimidate or discipline any journalists for engaging in public discourse.”

Letter organizers sought to position the “culture of silence” in media around coverage of Israel and Palestine as both a class and workplace issue, said one person who helped to organize it and requested anonymity for fear of retaliation. Many journalists don’t think their outlets cover the region in a factual or balanced way, they said, adding that “media companies have consistently, over decades, bowed to massive external pressure to skew their reporting in this way.”

“There’s a ton of fear in the industry and that is a workplace issue as much as anything.”

The nature of the issue, they explained, “makes it a matter on which there can be class solidarity and, we hope, collective workplace action.” It’s not a secret within the industry “that if you push back on the way you are directed to cover this issue, or you speak in public in a way that shows you see Palestinians as victims of a colonial occupation, you can and will likely be disciplined by your employer, subjected to a barrage of targeted complaints by external parties, and possibly sacked. There’s a ton of fear in the industry and that is a workplace issue as much as anything. Strength in numbers seems to me to be the only possible way through that.”

SBS confirmed to The Guardian on Friday that it had spoken to employees who signed the statement but denied that anyone was asked to remove their name. A spokesperson for the company said no disciplinary action had been “taken or proposed” with respect to the letter. “SBS is a publicly funded national broadcaster which must be, and be seen to be, objective and impartial,” the spokesperson said. “SBS had informal conversations with employees to remind them of their obligations to be balanced and impartial in all their editorial output, and to consider public perceptions of their impartiality.”

MEAA later posted an update saying that after the union reached out to SBS, the company “has since confirmed that no disciplinary action will be taken against SBS staff who signed the open letter.”

Reached for comment, SBS Head of Corporate Communications Paul de Leon sent the same statement to The Intercept. “No individuals were directed to remove their names from the open letter, nor has there been any disciplinary action taken or proposed in relation to this matter.” ABC did not respond to a request for comment.

“We know that it’s unequivocally false that that’s not what happened,” said Jennine Khalik, a content creator based in Sydney who helped to organize the letter. Khalik’s parents are Palestinian refugees. She was a journalist for eight years and previously worked at ABC. “They are trying to protect their name.”

Asked if Taylor’s trip or Mundine’s tweets conflicted with SBS “obligations to be balanced and impartial,” or whether SBS contacted either person as it had staffers who signed the Gaza letter, SBS’s de Leon said the Israel study mission was attended by media professionals from many Australian outlets and “enabled representatives to gain a deeper understanding of the region, hear a range of diverse perspectives first-hand, and engage with peers in the media.” The company “takes great care to ensure that our editorial output is impartial and balanced, reporting on all perspectives in line with the SBS Codes of Practice. Whether or not these Code provisions have been breached is assessed against the relevant content,” de Leon said.

“There’s clearly a culture that’s sympathetic to Israel,” said Khalik. “Being pulled aside for [signing a letter] when the culture is so sympathetic to Israel, it’s threatening. You can go on junkets, and you can tweet whatever you want about standing with Israel, and you can skew stories without consequences. It was clear that those conversations [with management] would impact their time there.”

Reporters in other countries are facing similar backlash. Canadian journalists circulated a similar open letter on the same day. Several signatories were reprimanded by management or completely taken off coverage of the region, The Intercept reported. The Canadian Broadcasting Corporation sent an email to staff Friday addressing the letter as a “conflict of interest” and advising that journalists on staff who signed it would be taken off coverage of the region.

CBC staff also received an email last week reminding them of CBC guidelines not to use the word “Palestine” in coverage. “Hey gang, Just a reminder – if you’re doing any reporting on the conflict in the Middle East, please be sure to read our Middle East glossary in the language guide. In particular, I’m seeing Palestine in some of our communication and rough draft,” CBC News Toronto Executive Producer Laura Green wrote. “We do not use Palestine to refer to the West Bank or Gaza. It’s ok to use clips from protesters saying it but we should not, as there is no modern country of Palestine.” Green added that it is good practice to “avoid using Palestine colloquially in our own exchanges,” as to reduce the risk that someone might “accidentally write or say it in something that is published or broadcast.” The email also included CBC guidelines that advised writing “Palestinian militants in Gaza” instead of “Hamas,” unless referring to an action claimed by the group.

CBC said that journalists who signed the letter “have taken a public stand on this story which created the perception of a conflict of interest among some members of our audience” and that the company was “ensuring editorial distance between signatories and our daily coverage for the near future.” But “no one is being disciplined for signing the letter,” and no stories are being dropped,” CBC Head of Public Affairs Chuck Thompson said. “Our style guide reflects the fact that, although there is an establishment movement as part of a two-state peace agreement with Israel, there is at present no modern country of Palestine and our recommendation is to use Palestinian territories. That said, we quote people who talk about Palestine and do interviews about books with Palestine in the title.”

In the U.S., the Associated Press fired news associate Emily Wilder for what the global press giant said were “violations of AP’s social media policy.” Wilder had been the target of a conservative smear campaign over her activism in college in support of Palestinian rights. As Washington Post media columnist Erik Wemple wrote Tuesday, the AP had previously asked Wilder to remove the phrase “Black Lives Matter” from her bio on Twitter.