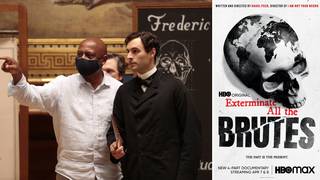 A new four-part documentary series, “Exterminate All the Brutes,” delves deeply into the legacy of European colonialism from the Americas to Africa. It has been described as an unflinching narrative of genocide and exploitation, beginning with the colonizing of Indigenous land that is now called the United States. The documentary series seeks to counter “the type of lies, the type of propaganda, the type of abuse, that we have been subject to all of these years,” says director and Haitian-born filmmaker Raoul Peck. “We have the means to tell the real story, and that’s exactly what I decided to do,” Peck says. “Everything is on the table, has been on the table for a long time, except that it was in little bits everywhere. … We lost the wider perspective.”