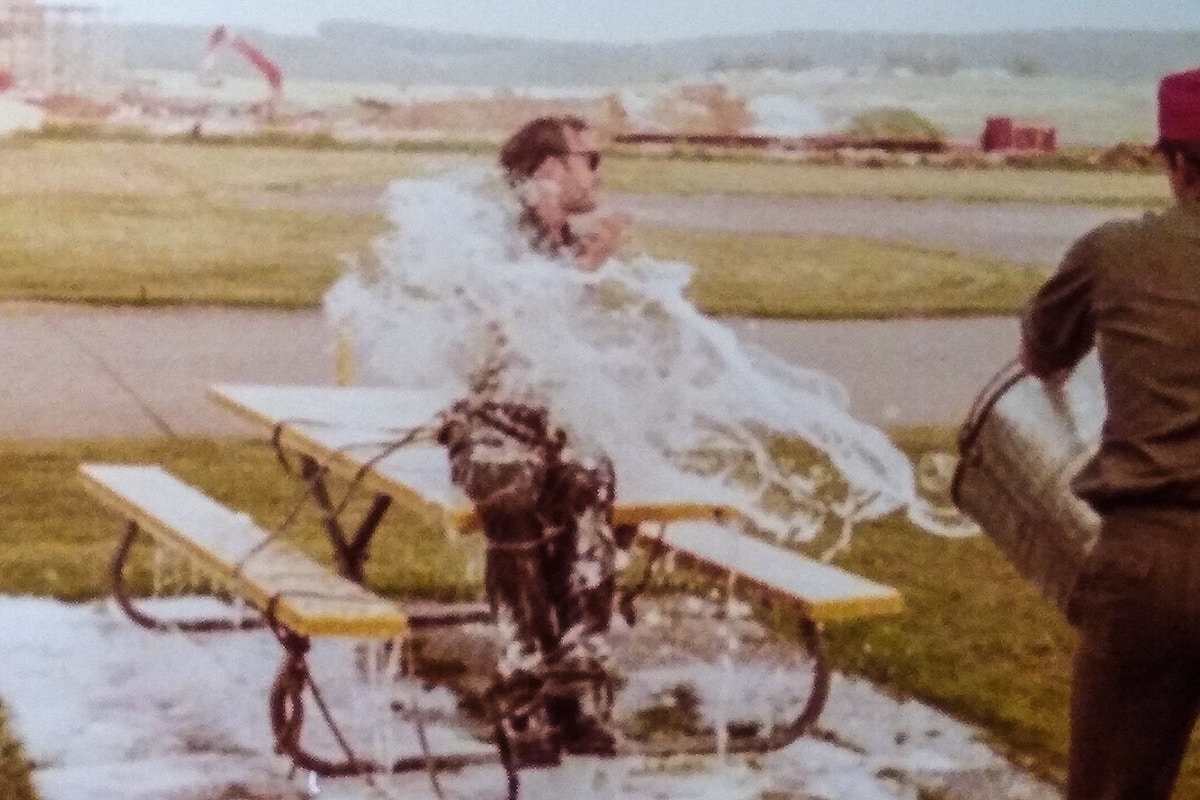 When Kevin Ferrara was starting out in the Air Force in 1991, he and his fellow firefighters developed a method for cooling each other down. His training at Chanute Air Force Base in Illinois involved repeatedly putting jet fuel and other chemicals and debris into a pit, setting them on fire, and then putting the flames out with firefighting foam known as AFFF. Ferrara and the other members of the fire crew became unbearably hot as they stood around the fiery pit. For relief, they would cover each other with foam.

“As we’re spraying each other, the substance would find its way under our collars and the cuffs of our sleeves. It would penetrate through the weak points of our suits,” Ferrara remembered. The sudsy foam did cool them down. Now, years later, Ferrara and many other civilian and military firefighters who were exposed to firefighting foam that contained the industrial chemicals known as PFAS are developing health problems that they believe are related to those occupational exposures. And despite ample evidence connecting PFAS exposure to multiple diseases, many are finding it difficult to convince others of the connection.

While almost everyone has PFAS in their blood through exposure to water, dust and everyday products that contain the chemicals, firefighters may have greater contact with PFAS than any other group of workers. In addition to using — and often getting doused with — AFFF, it has become clear in recent years that the clothing that was supposed to protect them while fighting fires, known as turnout gear, is also saturated with PFAS.

Given the frequent contact with the toxic chemicals, which accumulate in the body and cause kidney cancer, depressed immune function, and elevated cholesterol, among other health problems, it may not be surprising that firefighters have both relatively high levels of the chemicals in their blood and elevated rates of cancer diagnoses. Firefighters also have a death rate from cancers that is 14 percent higher than that of the general population, according to a study by the National Institute of Occupational Safety and Health.

But some firefighters who have used AFFF now find themselves struggling not just with illnesses linked to the chemical-laden foam and firefighting gear, but also with getting coverage for benefits related to those illnesses. In April, Volunteer Firemen’s Insurance Services, a company that provides insurance and other services to firefighters and is a division of the Glatfelter Insurance Group, sent its policyholders a notice that the company would be applying a “pollution exclusion” to its coverage, specifying that “the application of the pollution exclusion is extended to any use of Class B firefighting foam containing PFAS.”

The Glatfelter Insurance Group declined to answer questions for this story about how many firefighters and former firefighters are subject to its new pollution rider, which types of policies are affected, and why the company has chosen to exclude coverage of AFFF-related claims.

Meanwhile, some former military firefighters who used the firefighting foam and wore the gear are struggling to get the Department of Veterans Affairs to recognize a connection between their workplace exposure and their illnesses. Ferrara, who has elevated triglyceride levels in his blood, Type 2 diabetes, and numbness in his feet and hands, all symptoms that he believes are related to his exposure to the chemicals while in the military, was unable to get the VA to pay for a blood test to measure the PFAS levels in his blood. The VA also denied his claim for disability benefits based on his exposure to the firefighting foam.

Ferrara found that he wasn’t alone in meeting resistance from the hulking bureaucracy that provides health care to U.S veterans. As he learned more about the dangers of the foam that he had been told was harmless, he has become outspoken on the issue of the government’s obligation to take care of firefighters who were exposed to the chemicals in the line of duty. Through a Facebook group and email, he estimates that he has connected with at least 50 veterans who have developed cancer and other serious illnesses after using AFFF in the military and have had their claims for disability related to AFFF exposure denied by the VA. The VA provides these monetary benefits to veterans only if they can prove that an illness or injury was caused or exacerbated by their service.

“The VA keeps pushing back, saying that since about 96 or so percent of Americans have PFAS in their blood, there’s no definitive correlation between AFFF and their medical illnesses,” said Ferrara. “But if you ask any firefighter, they’re going to tell you that’s BS.”

“We shouldn’t have to go run around and fight to get testing done, it should just be presumptive if you did the service and were exposed. But what they do is they deny, deny, deny.”

Robert Gomez finds himself in that camp. Gomez used AFFF as a firefighter in the Air Force from 1990 to 2002 and continued to use it as a military contractor doing similar work until 2019. Last year, at the age of 49, he was diagnosed with stage 3 cancer, which was found in his liver as well as his colon and lymph nodes. Gomez, who has been unable to work as he undergoes treatment for the cancer, applied for disability based on the illness in December, but the VA rejected his claim, telling him the cancer was not “service related.”

“We shouldn’t have to go run around and fight to get testing done, it should just be presumptive if you did the service and were exposed,” said Gomez. “But what they do is they deny, deny, deny.”

VA spokesperson Gary Kunich wrote in an email that the “VA does not recommend blood tests to determine levels of PFAS in any individual. Because most individuals in the U.S. have measurable amounts of PFAS in their blood and normal ranges have not been established. Also, blood tests cannot be linked to current or future health conditions or guide medical treatment decisions.” Asked which medical conditions the VA recognizes as potentially caused by AFFF exposure, Kunich wrote that “AFFF contains PFAS chemicals and the potential health effects, similar for any PFAS exposure, depends on the concentration, frequency, and duration of exposure.”

Steve Kjonaas, legislative director of Department of Colorado Veterans of Foreign Wars, helps vets or their surviving family members who want to file claims related to their AFFF exposures in the military. According to Kjonaas, the VA doesn’t keep up with all the emerging science showing the health effects of PFAS. “A lot of times the VA doesn’t recognize that AFFF causes whatever illness because it’s not yet codified and not in their rules,” said Kjonaas, who was himself was exposed to AFFF for years as an Air Force firefighter before developing prostate cancer at age 40.

According to Kunich, the VA makes decisions about disability claims on a case-by-case basis by reviewing the types, levels and duration of exposure, the onset and nature of the claimed medical conditions, and other factors. “If there is an approximate balance of positive and negative evidence, VA gives the benefit of the doubt to the veteran,” Kunich wrote in an email.

Dan Casson, who believes that he is the first veteran to receive a 100 percent disability rating based on AFFF exposure, attributed his success with the VA to persistence. “I refused to give up,” said Casson, a former crash rescue firefighter in the Air Force who fought with the VA about benefits for six years after being diagnosed with both melanoma and stage 3 prostate cancer in 2014. The VA rejected his first two claims for disability but approved his third application in 2020. Although the agency retroactively granted him benefits dating back to 2016, Casson is still angry. “We all asked the same question: What is this stuff?” Casson said of his fellow firefighters, “And they told us it was just super soap suds.”

“They told us it was just super soap suds.”

It is not the first time the VA has delayed compensating veterans for environmental exposures. In 2019, more than 50 years after the first Air Force members were exposed to the herbicide Agent Orange, legislation finally forced the VA to provide disability compensation to service members who developed cancers and other diseases. Before that, many veterans who had been exposed to the chemical, which the U.S. used in Vietnam in the 1960s, had their claims rejected for decades.

Jeff Hermes said that he is not prepared to wait for the government to own up to its responsibility for exposed veterans — and that the U.S. military shouldn’t have allowed its firefighters to be exposed in the first place. “I’m disappointed in the government’s inability to recognize what is being talked about more and more in regard to these chemicals making firemen sick.”

Hermes is also angry that firefighters were exposed to the foam while some had evidence of their harms. “Industry knew this was happening, but never, never said anything to anybody,” Hermes said, referring to evidence that 3M and DuPont were aware of the risks of the PFAS chemicals in the foam. While the companies and the U.S. military have had evidence of the dangers of the chemicals for years, Hermes said, “We had no idea.”

“Industry knew this was happening, but never, never said anything to anybody.”

Hermes was exposed to AFFF when he was stationed at multiple Air Force bases between 1983 and 1989, including the Misawa Air Force Base in Japan. “You stayed in your gear a lot,” he remembered of his time as an Air Force crash fire rescue worker. In 2016, at age 50, Hermes was diagnosed with aggressive prostate cancer. “It wasn’t the kind you watch and wait and follow,” said Hermes, who underwent surgery to remove his prostate and a subsequent surgery to address incontinence that was caused by the first surgery. Around the same time, five of his colleagues were also diagnosed with various cancers. “All of us had the same work history — from the U.S. Air Force to working as an airport fireman,” he said.

In 2017, Hermes, who described the prostate cancer experience as physically and emotionally devastating, applied for disability benefits based on the cancer. The VA denied his claim. “Their response has been: There is no proof scientifically or medically that PFAS was the cause of my cancer, even though my own oncologist wrote a letter stating that it was his belief that it was more likely than not that the exposure was a primary contributing factor,” said Hermes, who reapplied for disability benefits last year. He is now awaiting the VA’s decision on his second application.

But even if the VA rules in his favor, a decision that could give him a few thousand dollars a month, Hermes says that won’t be a just outcome. “It’s not about getting the money,” said Hermes. “It is about the validation that something is wrong with a system that allowed us to be poisoned by man-made chemicals, which they knew about and said nothing. I just want them to admit they were wrong.”

This content originally appeared on The Intercept and was authored by Sharon Lerner.