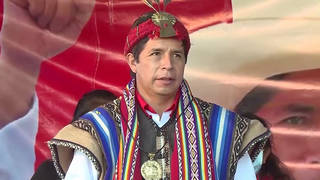 We get an update from Peru, where socialist candidate Pedro Castillo has pulled ahead of his right-wing rival Keiko Fujimori in the country’s presidential election on Sunday. Castillo is the son of peasant farmers, and a union leader who led a nationwide teachers’ strike in 2017. Fujimori is the daughter of former dictator Alberto Fujimori, who is in prison for human rights abuses and corruption. Political scientist Carlos León Moya discusses the history of the two candidates and describes how the election took place amid a years-long political crisis. “You have most of the Peruvian political elite charged by corruption,” he says. “Keiko Fujimori was in prison herself two years ago for a corruption case.”