The response of the press to Naomi Osaka’s announcement that she would not be attending press conferences during the French Open only illustrates why athletes dread such media events in the first place.

When the 23-year-old four-time Grand Slam winner announced on May 26 that she would not be attending post-game press conferences during this year’s French Open because “people have no regard for athletes’ mental health,” she expected a fine. But, as she said in a later statement announcing her complete withdrawal from the tournament, she did not expect her decision to cause such an uproar.

Osaka’s May 31 statement announcing her withdrawal from the French Open struck an apologetic note after her initial decision earned her a $15,000 fine from the French Open, and a threat by all four Grand Slam tournaments to serve her more penalties—including suspension. In the wake of a media frenzy, she recently announced she’d be withdrawing from the Wimbledon WTA 5000 tournament as well.

Many outlets have published compassionate opinion and news pieces of Osaka’s announcement (Guardian, 5/31/21; Esquire, 6/1/21; Washington Post, 6/1/21), though the sheer amount of coverage is ironic in and of itself. But some of the press treated her decision as simply a flippant diva move meant to attack them, dismissing her explanation that it was necessary to preserve her mental health.

Making themselves the victim

The fact that this issue is even up for debate, and that journalists can so easily make themselves the victim in a story about a young athlete prioritizing her mental health, just drives Osaka’s point home. 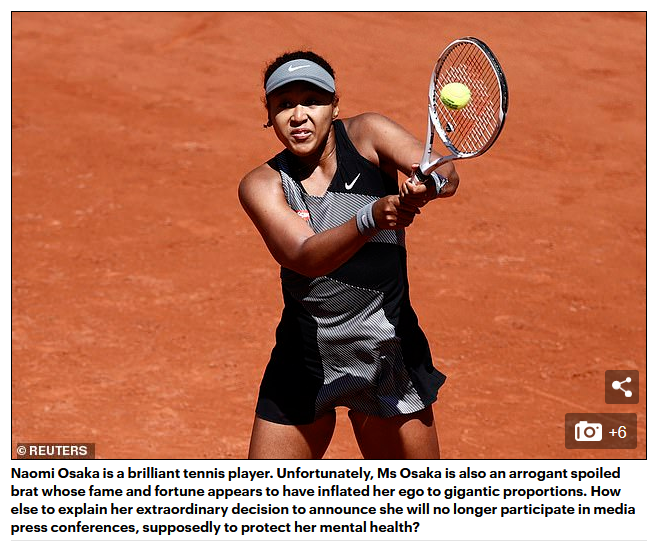 Piers Morgan (Daily Mail, 5/31/21) went after Naomi Osaka as “an arrogant spoiled brat whose fame and fortune appears to have inflated her ego to gigantic proportions.”

British commentator Piers Morgan, who recently stormed off the set of Good Morning Britain and subsequently quit the show after being called out for his treatment of Meghan Markle, ironically called Osaka an “arrogant spoiled brat” in a Daily Mail column (5/31/21), accusing her of exploiting mental illness to silence the press.

Outlets like Al Jazeera (5/31/21), Forbes (5/30/21) and Reuters (6/1/21) referred to her decision as a “boycott” of the media, suggesting that she is choosing not to attend press conferences to express her hostility to the press. In fact, she clarified in her May 31 statement that she has had mostly positive experiences with journalists, and is opting out of press conferences because of the intense anxiety they cause her.

The New York Times (6/26/21) mentioned that she made $55 million last year right after a quote from French Tennis Federation president Gilles Moretton saying her refusal was a mistake—as if to suggest that wealth undercuts Osaka’s mental illness concerns.

Osaka’s May 31 statement outlined the depression and social anxiety she deals with:

I never wanted to be a distraction, and I accept my timing was not ideal and my message could have been clearer. More importantly, I would never trivialize mental health or use the term lightly. The truth is I have suffered long bouts of depression since the US Open in 2018, and I have had a really hard time coping with that. So here in Paris I was already feeling vulnerable and anxious, so I thought it was better to exercise self-care and skip the press conferences. I announced it preemptively because I do feel like the rules are quite outdated in parts, and I wanted to highlight that. 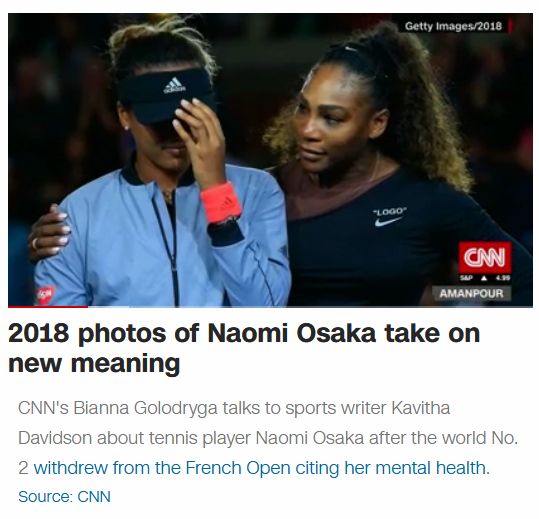 CNN (6/2/21) responded to Osaka’s statement that excessive media attention was harming her mental health by running a highlight reel of her most vulnerable public moments.

But when someone says they’re avoiding press attention that jeopardizes their mental health, much of the press just doubles down on covering them in their most vulnerable and emotional moments. In a CNN segment (6/2/21) melodramatically headlined “2018 Photos of Naomi Osaka Take On New Meaning,” reporter Bianna Golodryga interviewed another journalist, sports writer Kavitha Davidson, about Osaka’s mental health, running a reel of photos of Osaka crying after her controversial 2018 US Open win against Serena Williams.

An MSN article (6/10/21) cited only one interview, with former British No. 1 Greg Rusedski, who argued that talking to the press is just part of the job, and that tennis players rely on journalists to bolster the sport. He was dismissive of Osaka’s argument that she needed to protect herself from depression and anxiety:

You can’t go and play without talking to the press. 99.9 percent of the journalists are fine and you are always going to get one tricky question from time to time that you might not like.

Learning to politely avoid those questions, he said, comes with “maturity.” This interview, which MSN proudly flagged as “exclusive,” had no actual reporting besides quoting Rusedski’s indifference to Osaka’s problems, and no citations of any arguments that might challenge his own. 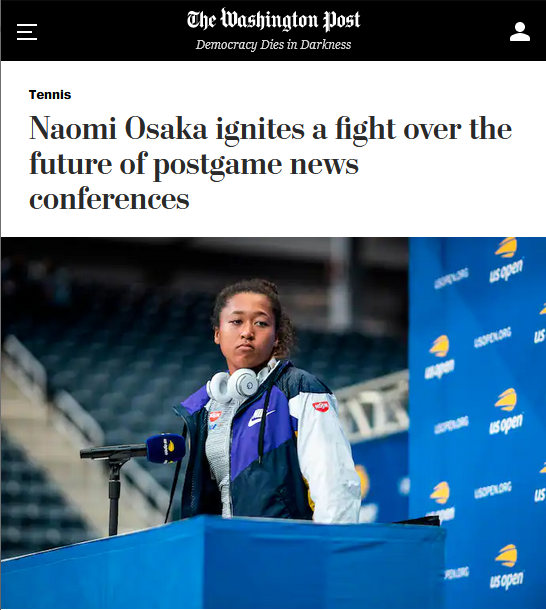 Ben Strauss (Washington Post, 6/3/21): If athletes being allowed to decide “how and when they talk to the press…results in less journalism about the athletes, that will be a loss — for reporters and plenty of fans.”

A particularly revealing Washington Post article (6/3/21) discussed the “fight” Osaka’s move “ignites” over athletes’ post-game news conferences. Under a photo of Osaka looking particularly aloof and unamused at a 2019 press conference, reporter Ben Strauss presented Osaka’s choice as bringing to a head a high-stakes debate between the well-being of athletes and respect for the field of journalism, setting off “a firestorm over the value of the work reporters do.”

Strauss quoted Bill Babcock, who wrote the ATP Tour rule book in 1990, which includes the provision about fining players who don’t attend post-game press conferences. “It was a recognition that you can’t have players deciding not to see the press if they have a bad day,” he said. “It was an important obligation to respect and work with the media.”

Note this wasn’t because post-game news conferences offer crucial information to the public; it was because Babcock “had seen the value of a traveling press corps to promoting the sport.”

Strauss also quoted former SportsCenter anchor Keith Olbermann, who said that the press feeling entitled to constant access to athletes is not only invasive, but a misunderstanding of players’ jobs. But, Strauss noted, “Plenty of beat reporters, of course, would disagree.”

Presenting both points of view isn’t the problem. Presenting them both as equally legitimate is. Framing the issue as a “he said, she said” debate, in which “respect” for journalism translates into equating debilitating depression with having “a bad day,” degrades journalism. It’s always been against journalistic ethics for reporters to demand unfettered access to sources.

The Society of Professional Journalists’ Code of Ethics, the closest thing there is to a standard rulebook for the press, includes “Minimize Harm” as its second tenet. Of course, public figures sign up to be in the spotlight more than private citizens, but even so, reporters should “balance the public’s need for information against potential harm or discomfort. Pursuit of the news is not a license for arrogance or undue intrusiveness.”

It isn’t that sports and entertainment journalism aren’t important, but reporters aren’t exactly acting as the Fourth Estate or sticking it to The Man when they raise their hands and ask players what they thought they could’ve done better after a loss, or how they plan to keep up their momentum after a win. Osaka is not running for office, exploiting workers, evading taxes or bombing Gaza. She has nothing to be held “accountable” for. Her fans—and the fabric of democracy—will be just fine if she forgoes offering quotes to journalists after her matches. Balancing the “need for information” with the potential harm or discomfort these press conferences cause athletes shouldn’t be a difficult task.

But, of course, the corporate press rarely cares about the issue of mental health unless it can profit off of it, like when it can be spun into a trend piece because a celebrity (or, recently, a pandemic) is forcing it into the foreground. (Days later, the Post published a piece, “How to Know When You Need a Mental Health Break and Ways to Make The Most of It”–3/4/21–centering and celebrating Osaka’s decision, written by Allyson Chiu, reporter on the “wellness” beat.) When it blocks their access, or they are forced to reckon with their own role in the degradation of sources’ and audiences’ well-being, it becomes an existential threat to the values of a Free Press.

Strauss’s article highlighted the issue of Osaka’s gender, while also managing to gloss over the sexist absurdities women athletes often face in interviews. He quoted Jane McManus, sports reporter and director of the Center for Sports Communication at Marist College, who is “worried about the effect on women’s sports if the biggest stars don’t talk to reporters.”

“If she’s not talking to reporters, will there be as much coverage for the next Naomi Osaka?” she says.

But what kind of coverage? Strauss gives a brief nod to the reality that female athletes often face more invasive, insensitive and irrelevant questions from reporters, but he lets his source blame under-qualified journalists, not systemic sexism in sports and the press:

Rennae Stubbs, a former tennis pro turned ESPN commentator, said tennis majors have become over-credentialed, which has led to worse questions in the interview rooms—including journalists asking female players about their clothing. If the tournaments tightened their credential requirements, she said, the interview rooms would be more professional.

Chances are the “next Naomi Osaka” will be treated the way “previous Naomi Osakas” have been:

Another Washington Post piece (6/1/21), “At News Conferences, Male Athletes Get to Be Athletes. Female Athletes Like Naomi Osaka Get Pestered,” makes this connection, filling the void Strauss’s piece left. Like Chiu, who covered Osaka in the context of mental health, columnist Monica Hesse does not regularly cover sports; instead, her column focuses on “gender and its impact on society.”

In Strauss’s article, the subject of gender served almost entirely to argue that female athletes need the press to stay relevant. And the issue of race is nonexistent. Osaka is of Haitian and Japanese descent; we’ve seen how the press berates Black women like Serena Williams for “bad behavior,” while not batting an eye at the outbursts of men like John McEnroe.

Strauss ended his article by writing that athletes skirting the press and using their own platforms to speak to fans on their terms might result in “less journalism about the athletes”—an outcome that would “be a loss for reporters and fans.”

Reporters can find better ways to expand their portfolios—for example, by talking to athletes who actually want to be interviewed. Fans will continue to watch games, follow their favorite athletes’ social media accounts and read stories that come from actually engaging interviews, and not from exhausted players’ one-sentence post-game answers.

The field of journalism will be fine.