Last year, Rainforest Action Network tracked down and published a document revealing the 11 insurance giants behind the controversial Trans Mountain tar sands pipeline in Canada, which were providing more than USD$500 million in insurance policies. These pipelines are so dangerous that under Canadian federal law that the existing Trans Mountain pipeline cannot move any oil, and the expansion project cannot be built, without hundreds of millions in insurance coverage.

That makes un-insuring Trans Mountain a critical way to stop the pipeline once and for all, which is why a global coalition of Indigenous communities, climate activists, and finance campaigners has been calling on the insurance sector to stay far away from Trans Mountain. And our efforts are working: as of this week, fourteen insurers have pledged not to touch Trans Mountain, and many of these companies have also adopted policies ruling out all support for all tar sands expansion projects.

What is Trans Mountain?

It's not a surprise that insurers are dropping like flies: the existing Trans Mountain pipeline is a major environmental and public health hazard, and the expansion project consists of an entirely new pipeline that would ship more than 590,000 barrels per year of highly-polluting tar sands crude oil to the coast of British Columbia.

If the pipeline goes into operation, it is estimated that it would produce the same climate pollution as adding 22 million new cars to the road.

The existing Trans Mountain pipeline was built 68 years ago when Indigenous communities were not allowed to hire lawyers to represent themselves, and the proposed expansion of Trans Mountain has been delayed for years in the face of fierce Indigenous resistance. It has not obtained the Free, Prior, and Informed Consent of Indigenous communities on whose lands the pipeline would cross. The Tsleil-Waututh Nation, Squamish Nation, Coldwater Indian Band, and Ts'elxwéyeqw Tribes have challenged Trans Mountain in the courts, and land defenders like the Tiny House Warriors are occupying their land and asserting their responsibility and jurisdiction over their lands and waters.

Tar sands are one of the dirtiest, highest carbon sources of oil on the planet, with climate emissions from a barrel of tar sands 70% above the global average. Alberta's oil patch is one of the biggest in the world and is the single largest industrial project on the planet. If the pipeline goes into operation, it is estimated that it would produce the same climate pollution as adding 22 million new cars to the road, and a growing consensus—now including the International Energy Agency – agrees that there is no room for new tar sands (or any oil and gas projects) to keep global warming to a safe limit.

Up in Alberta, the Beaver Lake Cree have mounted one of the most significant legal cases to date over the development of the Alberta tar sands. They are the first community to ever challenge—and be granted a trial on—the cumulative environmental, social, and cultural impacts of industrial development.

In response, Trans Mountain filed a request with Canadian regulators asking to keep its insurers secret last February because, as the company put it: "Trans Mountain has already observed increasing reluctance from insurance companies to offer insurance coverage for the Pipeline and to do so at a reasonable price."

The company blamed pressure campaigns like ours for why it was struggling to get insurance coverage, conveniently not mentioning all of the serious risks with the pipeline and the broader shift of insurers out of the fossil fuel industry. As CBC recently reported, many insurers are no longer offering coverage to major pipelines and tar sands facilities, as they take steps to decarbonize their portfolios.

Unfortunately, the Canadian government approved Trans Mountain's request to shield its insurers. But we know that hiding the details of Trans Mountain's insurance certificate will do nothing to address the very real problems this pipeline faces: lack of consent from Indigenous communities, decaying infrastructure, mounting costs, and a huge carbon footprint. It's also not going to stop us from continuing to pressure insurers to stay far away from Trans Mountain and all tar sands expansion projects, as we still know who the likely insurers of Trans Mountain are.

Who's still insuring the pipeline?

This summer, we're targeting the companies that were linked to the pipeline last year and have not yet stated that they have cut ties or plan to drop Trans Mountain as a client. Here's the list: 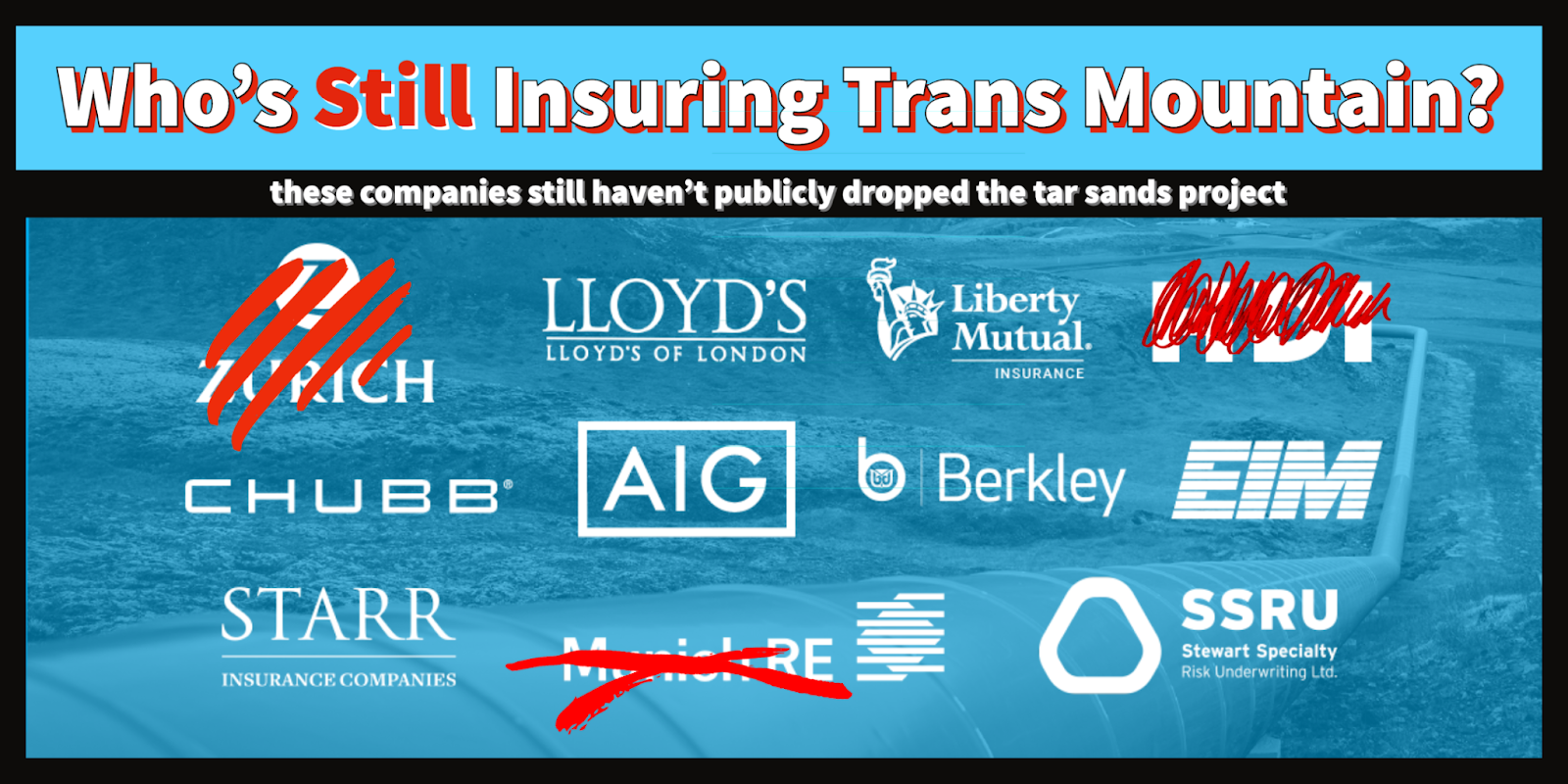 Trans Mountain's current insurance policy expires on August 31, 2021, so we are urgently calling on these companies to:

People all over the world—from Canada to Sierra Leone to Australia—are taking to the streets and to insurance offices in solidarity with Indigenous communities fiercely resisting Trans Mountain on the frontlines. Together, we are demanding that these insurance companies insure our future, not Indigenous rights violations and fossil fuel expansion. We hope you'll join us.

This content originally appeared on Common Dreams - Breaking News &amp; Views for the Progressive Community and was authored by Elana Sulakshana.