Since the Sandinistas won the 2006 election their anti-poverty policies have had enormous success.

The country is 90% self-sufficient in food. 99% of the population have electricity in their homes that is now generated with 70+% green energy; International financial Institutions including the World Bank, the International Development Bank and The Central American Bank for Economic Integration praise Nicaragua for its excellent, efficient project execution. it has one of the best health systems in Latin America praised by the International Monetary Fund, with 20 new state of the art hospitals since 2007 achieving one of the lowest Covid mortality rates in the world. Poverty, extreme poverty, maternal, child and infant mortality have all been cut at least in half. Nicaragua is number one in the world in both women in politics and women in ministerial positions and it is fifth in gender equity behind the Nordic nations.

Many more advances for the majority of the population in education, housing and infrastructure have resulted in huge wins for the FSLN in the last two elections (2011 and 2016) and polls indicate that in the November 7 presidential elections they will garner at least 60% of the vote with at least 70% voter turn-out. Some 95% of the adult population have identity cards needed for voting. If the US public knew what this nation, impoverished by nearly 200 years of US war and aggression, has been able to achieve in fourteen years it would surely encourage them to demand better education, infrastructure and universal health care in the United States. 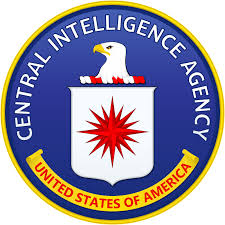 To prevent similar acts of sovereignty by small nations still considered colonies by the United States, the CIA prepared the way for the 2018 coup attempt and has never stopped trying to overthrow the Sandinista government since. The CIA uses US agents, many who pass themselves off as journalists or activists, as well as those eternally stationed at the US embassy; it has provided millions of dollars to hundreds of Nicaraguans acting as foreign agents as well as their nonprofit organizations that conspire against the Sandinista government like those recently arrested for money laundering, fraud and requesting foreign intervention.

Much of the US-directed propaganda apparatus was designed and funded by the US after the FSLN won the 2006 elections ending 17 years of three US-directed governments. A subversive front of newspapers, magazines, television stations, radio stations, websites, news agencies, and social media pages was formed. Journalists and media outlets were paid by the US (millions through the USAID, NED, IRI and US foundations) and much of it was administered by the Chamorro family media cartel, specializing in fake media campaigns to try to promote anti-Sandinista hatred and mistrust of the government.

Part of this has been known for some time. For example, in May, 2018 during the coup, Tom Ricker of the Quixote Institute described 55 NED grants awarded between 2014 and 2017 for US$4.2 million “as part of a U.S. government-funded campaign to provide a coordinated strategy and media voice for opposition groups in Nicaragua. NED grants fund media (radio, social media and other web-based news outlets) and opposition research. In addition, strategies targeting youth get substantial funding, along with programs seeking to mobilize women’s and indigenous organizations. Though the language is of support for “civil society” and “pro-democracy” groups, the focus on funding is specifically to build coordinated opposition to the government.”

On June 2, Journalist William Grigsby on his news analysis program, Sin Fronteras, revealed (see below) US documents which show that the CIA openly channeled US$16.7 million for the coup attempt, between February 2017 and July 2018, through the Violeta Barrios de Chamorro Foundation whose director Cristiana Chamorro is part of a famous family of oligarchs that count eight members as previous presidents; she is also the daughter of former president Violeta Barrios de Chamorro. She and her uncle are owners of the only daily, La Prensa, funded by the US for pro-Contra lies since the 1980s. Her brother Carlos Fernando has his own media empire. US funds to the VBCHF support these family businesses. Her now-deceased husband, Antonio Lacayo is widely considered to have exercised great power during her mother’s presidency from 1990 to 1997 overseeing some 7 billion dollars in privatization of state property, as well as privatization of education and health care. During the early 90s you couldn’t get so much as an aspirin at a government hospital without paying for it. 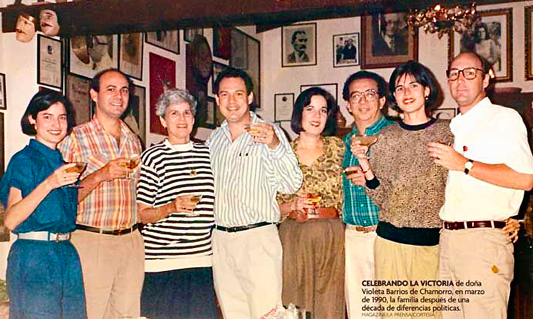 Chamorro Family, 1990s, Cristiana and Antonio Lacayo are on the right , laprensa.com.ni

The US$16.7 million was given by US agencies and foundations specifically to finance media terrorism [lies, fake news and distortion to foment assassinations and hate, destabilize and create chaos] to incite and maintain the coup attempt. The Chamorro Foundation also received €679,530 from European government-financed organizations during this period. The attempted coup left more than 200 families in mourning, thousands of people traumatized as well as much destruction and severe damage to the economy resulting in the loss of at least 130,000 jobs.

The Foundation’s Director, Cristiana Chamorro, was accused by the Public Prosecutor’s Office of money laundering, and given house arrest on June 2, 2021. She closed the Foundation in February of this year saying she didn’t want to comply with the “Foreign Agents” law passed in October 2020, similar to, but not as strict as, the 1938 US Foreign Agents Act. Under the Nicaraguan law, organizations receiving foreign funding must report that funding and how it is used – thousands of nonprofits are doing this with no problem.

According to Grigsby and Liberal Party news analyst, Enrique Quiñones, there was still at least US$7 million in the Foundation account when she closed it and this money appeared soon afterward in three of her personal banks accounts.

The US$16.7 million given by the CIA during that short time-span was just the money given for fake news – to fund every kind of news media, programs, social media and to directly fund individuals. Many millions more were provided to other nonprofits and “Human Rights” organizations. It is telling that in a country of 6.3 million people there are four human rights organizations – all funded by the US government and one was even founded by the US government in the 80s to cover up for the Contra.

Within that US$16.7 million, US$9,409,853 was provided by USAID for individuals, projects and media. The National Endowment for Democracy gave the Foundation US$564,134 for a project “promoting independent journalism and freedom of expression” in November 2017. 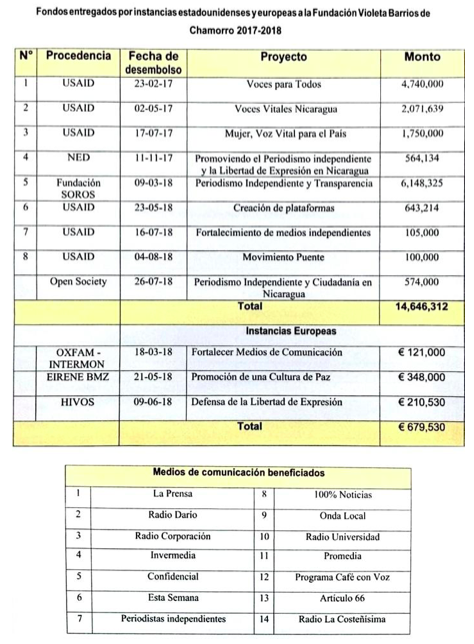 US Financing of Propaganda for Coup Attempt

The 2017-2018 funding of opposition media and journalists through the Chamorro Foundation by USAID, NED and Soros Foundations – US$16,696,312 million provided just before and during the attempted coup is a small part of funding provided by agencies like USAID, NED, IRI, Freedom House and foundations, like those of Soros with close ties to the Council on Foreign Relations.

The US began major destabilization attempts after the Sandinistas won the 2006 elections.

Official US documents presented by Grigsby in July 2020 provide more detailed evidence about which nonprofits and individuals benefitted from US$30 million right before the 2018 coup.

The USAID says this about their role in Nicaragua:

Anyone who has been watching Nicaragua knows that these supposedly “independent” media in Nicaragua have been the main source of Nicaragua news reported here in the United States. In other words, in my country most people get information about Nicaragua from the CIA!

New laws passed in 2020 (a Foreign Agents Law and a law against terrorism, coups and inciting foreign intervention, which the US vilifies even though they are similar but less punitive than those of the US), and the recent arrests of US Foreign Agents are actions to try to limit US intervention and prevent coup attempts. The US will still get money to their agents, but it won’t be nearly as easy as before and this will limit their ability to carry out the kind of terrorist actions they did in 2018.

William Grigsby on June 2 described what is happening right now in Nicaragua:

[We are] breaking the heart of the Yankee propaganda apparatus in Nicaragua, which was their main way of intervening, now, for the elections – influencing public opinion with lies, instilling fear, instilling hatred in order to try to defeat the Sandinistas. This whole operation that is being carried out from the prosecutor’s office as a spearhead is just that, to destroy the propaganda apparatus of US imperialism.” He asked what all the journalist agents in Nicaragua will do without the salaries they were getting. “Are they committed enough to actually do independent journalism?

Nevertheless, Uncle Sam will still continue efforts to destabilize the country. US ambassador Sullivan is constantly seen meeting with the agents, even denounced by President Daniel Ortega:

In July 2020 William Grigsby received a USAID document leaked from the embassy. It details in couched terms US destabilization plans for “transition” in Nicaragua and even the contracting of a US company to head it all up. RAIN – Responsive Action in Nicaragua has since been deleted, but not before it was archived. RAIN is a blatant plan for destabilization and overthrow of the democratically elected government of Nicaragua. It is likely that much of what the US has financed in the last year is part of the RAIN plan.

The USAID document establishes three scenarios that they call “democratic transition in Nicaragua:”

RAIN will pursue these activities against a variety of scenarios generally falling under three categories: 1. Free, fair and transparent elections lead to an orderly transition [the US candidate wins] 2. A sudden political transition occurs following a crisis [a coup leads to a US backed government] 3. Transition does not happen in an orderly and timely manner. The regime remains resilient in the face of domestic and international pressure. It is also possible that the regime may remain in power following electoral reforms and a fair election, but without changes to the rule of law or democratic governance [i.e. without changes that benefit US corporations].

It is clear from the RAIN document that the U.S. government realizes that the Sandinistas will win the 2021 election by a large margin: that is another reason they have provided millions to agents, organizations and fake news media, hoping that they can put a dent in the 60% Sandinista win predicted in the polls, or to undermine the elections altogether.

The long-time US agents under investigation for very serious crimes are not leaders: there has not been even one small protest since the arrests began June 2 because those arrested have no “pueblo.” People know that the US funded the very violent coup attempt through them – and hold them accountable. The foreign media tout them as presidential candidates, which they are not. When some of them saw that they might be arrested they ran to try to inscribe with the CXL (Citizens for Freedom) party as pre-candidates thinking this might protect them from detention. They all had the opportunity to form new political parties, but they didn’t even try because they don’t have enough members to fulfill minimal requirements. And more importantly, 17 parties are participating in the November 7 elections that don’t receive foreign funding.

And while the United States wastes millions of tax-payer dollars destabilizing the country, Nicaragua effectively and efficiently makes social and economic advances lauded by international organizations and banks, like universal health care, education, affordable housing, social infrastructure, gender equity, conversion to green energy, natural disaster and climate change mitigation, free recreation, and job creation with the creative and popular economy. The majority of the safest population in Central America with the lowest Covid mortality rate and the lowest emigration rate, who are healthier, better educated and housed, with electricity and potable water, whose food is locally grown and available at a decent price, with parks, fairs, pools and sports stadiums to enjoy their free time, are unlikely to let Uncle Sam influence their vote in November.

The post The CIA: Attempting Coups in Nicaragua with Tax Dollars Through US Agencies and Corporate Foundations first appeared on Dissident Voice.