New York City voters will finish choosing their Democratic mayoral candidate in primary elections tomorrow. With no strong Republican candidates, the winner of the primary is widely expected to become the next mayor of the country’s biggest city.

Recent polls have consistently shown that the top issue for New York City voters in the mayoral race is crime. And in a tight race, that emphasis appears to be giving the edge to Brooklyn Borough president and former NYPD officer Eric Adams, who strongly opposes the Defund the Police movement.

Rise in (some) crime 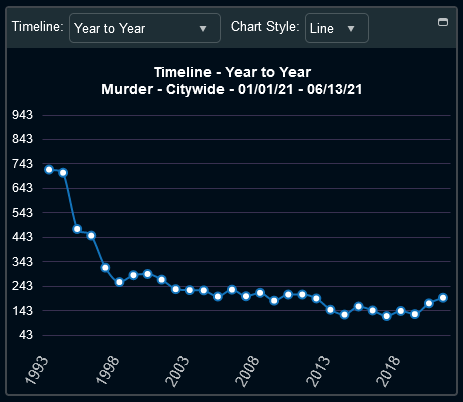 While there have been more murders so far this year in New York City (194) than in any other year of Mayor Bill de Blasio’s tenure, that’s well below how many were committed in the same period in every year of Rudy Giuliani’s two terms as mayor, and fewer than in that time frame in nine of Michael Bloomberg’s 12 years in office.

But why do voters rank crime at the top of their list? It’s true that some crimes have increased since the start of the pandemic. NYPD CompStat data show that there have been 194 murders so far this year in New York City, a pretty sharp increase over the past two years; there had been 171 murders at this point last year, and 127 in the same period in 2019. Shooting incidents likewise are up this year.

But while murders get the most attention, they’re also the rarest violent crime in NYC. Robberies are at their lowest point in decades, and misdemeanor assaults are sharply down the past two years; the 2021 rate so far is 22% lower than at this point in 2019. Felony assaults are up, but only 2% from the most recent 5-year average. (These disparities are consistent with crime increases being primarily driven by record levels of gun purchases, rather than by the reforms of policing that are often blamed for the rise in the murder rate.)

Looking just a bit farther back, you can see that New York is nowhere near its “bad old days” of crime. In 1993, the earliest year for which the NYPD provides year-to-date crime numbers, there were 718 murders at this point in the year—3.7 times higher than today. In fact, the current number is just a hair higher than the 191 to this point in 2012—a year when murders reached a record low, and then–Mayor Michael Bloomberg touted it as “the safest big city in America” (Gothamist, 12/28/12).

The overall crime numbers, combining the seven major crimes the NYPD tracks, are lower so far this year than any previous year, and less than a third their year-to-date total in 1996, the earliest year with such totals in CompStat (and a year when the city’s population was roughly a million people smaller than its current 8.4 million). 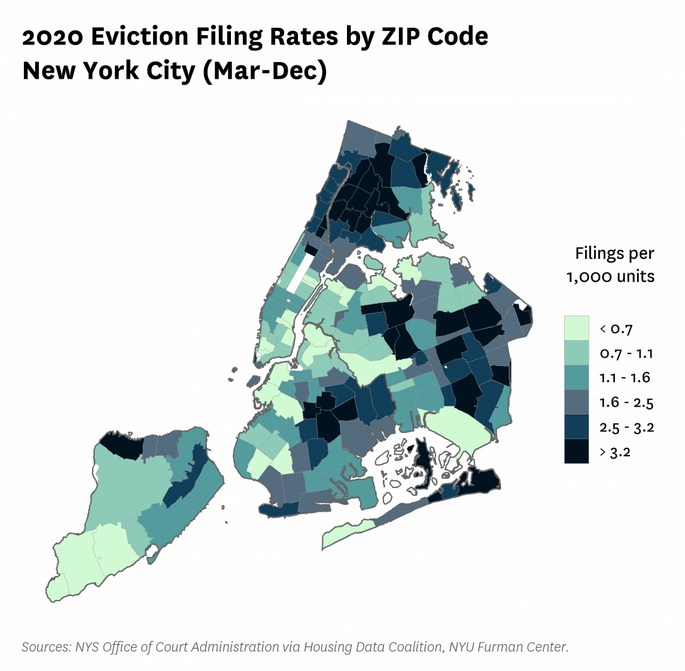 Meanwhile, New York City has long been facing a serious housing crisis. The number of single adults in shelters has reached record levels, public housing has faced a string of scandals (Politico, 8/14/20) and tenants continue to face punishingly high rents. Two-thirds of city households rent their homes, and in the past 10-15 years, incomes have not kept pace with rent increases. As a result, fully half of renters are considered “rent burdened,” meaning they spend more than 30% of their income on rent. A majority of those making less than $50,000 a year are severely rent burdened, spending more than half their household income on rent (Furman Center, 3/24/20, 2020).

The pandemic did send some residents fleeing and helped bring rents down a bit in certain areas. Those who left were mostly middle- and upper-income households, and most of the rent softening was concentrated in Manhattan and high-end markets (CNBC, 10/31/20). But for many renters, the past year was brutal: Households owing back rent saw their rental arrears spike by 66%, and the number of households with extreme rent debt doubled (Furman Center, 2020). 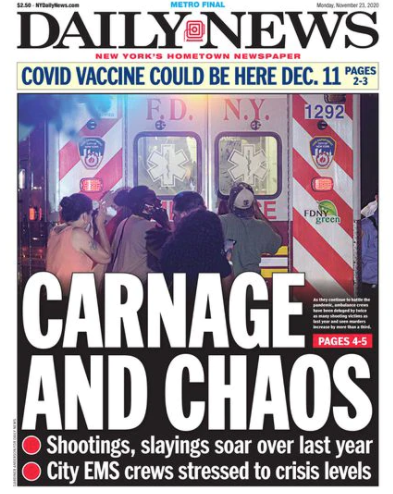 Yet the city’s two big tabloid dailies—which offer far more local coverage than its biggest paper, the New York Times—paint a dramatically different picture. Both papers gave far more coverage to crime than to the affordable housing crisis in the past year.

FAIR searched the Nexis news database for New York Post and New York Daily News articles that included the terms “crime,” “affordable housing,” “supportive housing,” “rent control” or “eviction,” from 6/18/20 through 6/18/21. The Daily News ran 1,365 stories that mentioned crime and only 166 that mentioned these housing crisis terms, a ratio of roughly 8 to 1; at the Post, the difference was 1,696 to 182, or closer to 10 to 1.

As stark as they are, those numbers don’t take into account front pages—the most visible and often most sensationalist part of the papers. And stories of violence appeared again and again on page 1 throughout the past year: 85 times at the Daily News and 57 times at the Post. By comparison, stories about the housing crisis–mostly dealing with homelessness–appeared 12 times on the front page of the Daily News and just twice on the Post‘s page 1.

At the Daily News, readers were treated to such front-page headlines as: 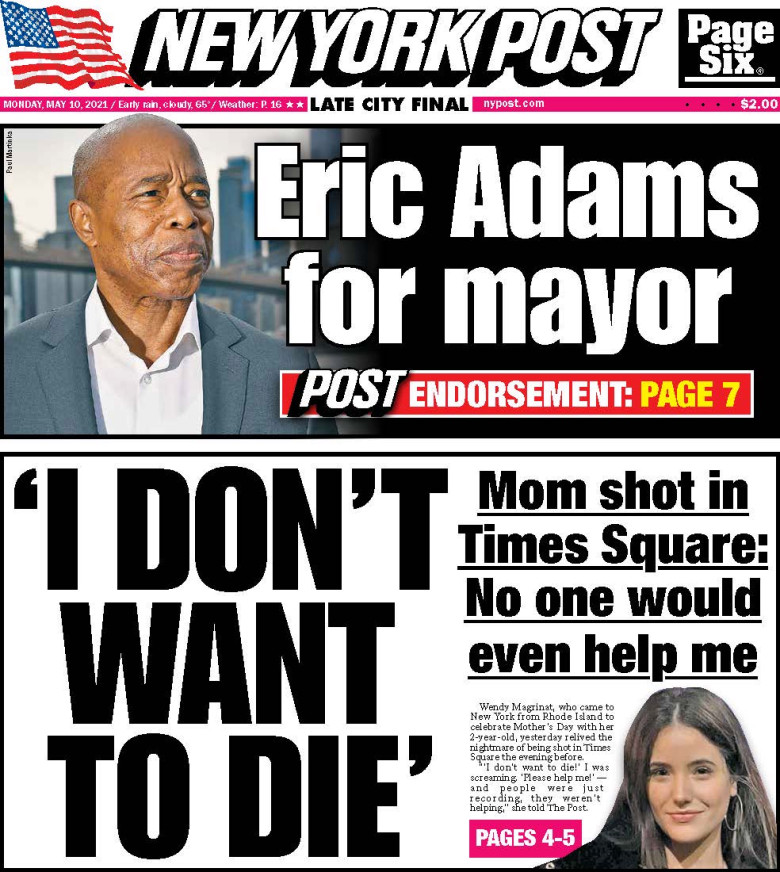 The New York Post (5/10/21) not-so-subtly linked its support for Eric Adams to its sensationalized crime coverage.

Meanwhile, the Rupert Murdoch–owned Post, lacking any viable Republican candidate to endorse, ran a front-page endorsement of Adams on May 10, featured on the top half of the page; the bottom half blared: “I Don’t Want to Die: Mom Shot in Times Square;  No One Would Even Help Me.” The day before (5/9/21), the paper had given the Times Square shooting front-page status (“Times Square Mayhem”), and two days before that (5/7/21), the front-page headline was “War on Our Streets; DA: Gang Battle Behind Killing of 1-Year-Old.”

(The Post took a break from front-page crime stories on May 8 to announce, “Companies Go Begging as Rich Benefits Keep Workers Home.”)

Sympathy for the landlord 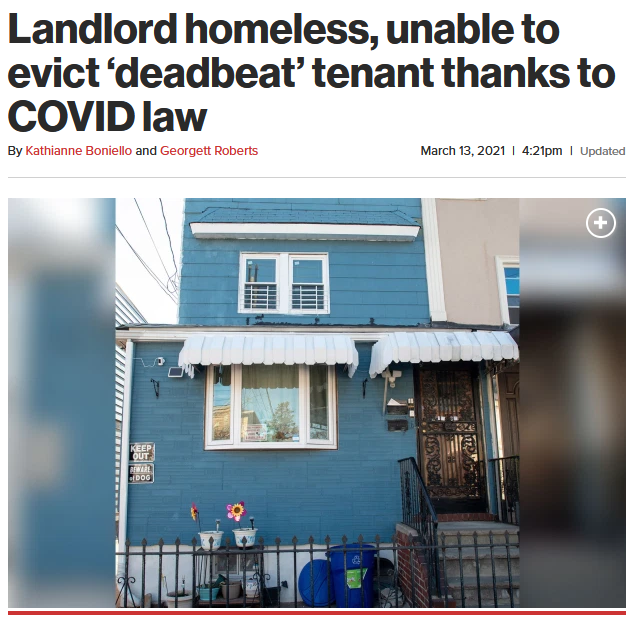 A rare example of a New York Post article (3/14/21) expressing sympathy for a homeless person.

Similar front-page histrionics over the housing crisis could not be found at either paper. Even the Post‘s paltry number of mentions of the housing crisis overstate its attention to renters’ plight, as the paper’s definition of “crisis” when it comes to NYC housing is quite different from most New Yorkers’. You’ll rarely find the paper covering—let alone lamenting—the situation facing low-income renters. Indeed, a great many of the Post articles we counted argue against things like rent control and the eviction moratorium, and paint landlords as the primary victims of any housing crisis.

To wit: A Post editorial (4/25/21) blasted a rent-control bill “that would clobber the housing market,” arguing that rents “have plunged to decade-long lows.” The tabloid ran an article (3/13/21) about a landlord who lives in her car because she’s been unable to evict her “deadbeat tenant” under the Covid eviction moratorium. “Kill the Rent Laws Now,” blared another editorial (10/25/20).

Covering the news that almost 1 in 5 rent-regulated tenants in New York City were more than two months behind on rent, the Post turned this into a story about the landlords who were owed the rent, quoting only a landlord interest group and a landlord’s daughter (“We have nothing. We are completely destitute.”).

In the Daily News‘ reporting on the eviction moratorium, which constituted a large chunk of its housing coverage, it typically offered up quotes from both tenants and landlords (e.g., “‘I don’t like owing anybody’: NYC tenants hail pandemic-related rent relief, but landlords remain skeptical,” 4/11/21). The editorial page (8/7/20), arguing for Congress to extend the federal eviction moratorium in August, did talk about “the enormity of the housing crisis”— though related only to the pandemic, and not NYC-specific—but it hasn’t mentioned affordable housing issues since last September.

In the paper’s endorsement (5/15/21) of centrist Kathryn Garcia—which it found only “a cut above Adams, and head and shoulders over the others”—the editorial board highlighted budget shortfalls, education, public safety and climate change as the major issues facing the next mayor, writing that “incidents of scary, random violence seem to be on the rise.”

As the saying goes, “if it bleeds, it leads.” One can imagine attention-grabbing coverage of the housing crisis—there’s no shortage of human tragedy in that story—but the real estate industry has long been a major newspaper advertiser, and a major political force in New York City in general. Story after story about people losing their homes or overwhelmed by rent debt don’t sit well next to cheery ads for new luxury apartments in the real estate section.

If they did, people’s perceptions of the top issues facing the city might look very different—and so might the mayoral race.