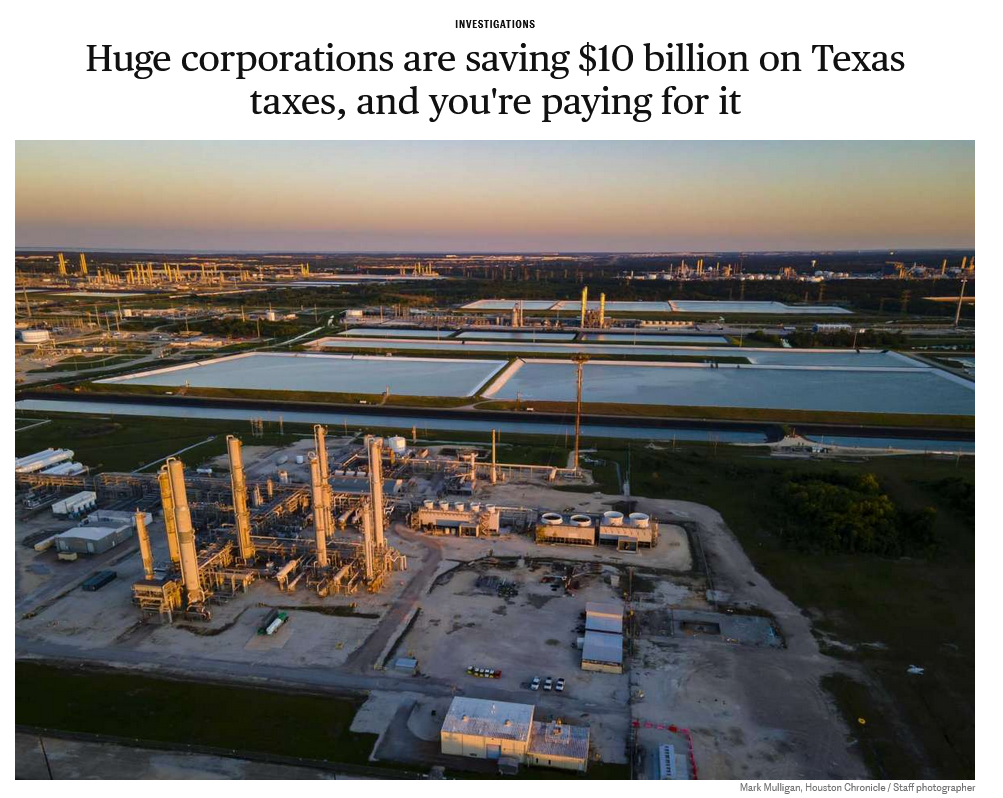 Janine Jackson: The US socioeconomic status quo that enriches so few and neglects so many can only be sustained by—not to put too fine a point on it—myth: You have to tell the same story so repeatedly and forcefully that people will question what’s before their eyes.

There are many myths, of course, but an important one is that if we give corporations tax breaks, they’ll just turn that gift right around and support the community with, first and foremost, jobs. And if you don’t give them that break, well, they’ll just take all those benefits to someplace that will.

That narrative is unraveling right now in Texas, where a massive and particularly perverse subsidy program known as Chapter 313 is set to expire, thanks to the work of a range of groups and reporters, particularly at the Houston Chronicle. Here to explain what’s happening and what’s at stake is Greg LeRoy, executive director of Good Jobs First. He joins us by phone from Maryland. Welcome back to CounterSpin, Greg LeRoy.

Greg LeRoy: Thanks, Janine. Great to be with you. 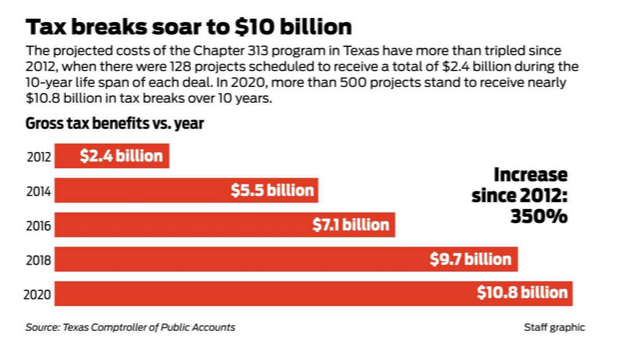 JJ: Subsidies, tax breaks, sweetheart deals: They’re in the DNA, almost, of many state and local, as well as the federal government. But Chapter 313 still stands out. It was passed in 2001, and renewed three times since, by wide margins. But that seems to have been in good part because not a lot of people knew what it was actually doing. How did—or how does, we don’t quite know yet—but how does 313 work in Texas?

GL: Sure. So it’s really a sweetheart mainly for the oil and gas industry. And the way it works is that companies apply: They say they’re going to build a new facility, or they’re going to expand an existing facility, or even, under the old rules, they’re just going to refurbish or do a bunch of maintenance work on an existing facility. And they want to get a 10-year, 100% property tax cut, an exemption, for that new value. And that’s real money, especially for capital-intensive facilities like refineries and petrochemical plants, because they’re very capital intensive.

The school district would be the biggest loser, of course, in that transaction, because school districts are the most expensive local public service. But the state would then reimburse the school districts, and paper over the losses. So it was really the state, at the end of the day, that was losing a lot of money, although school districts were losing money too. And at the end of the day, that bill was coming up to about a billion dollars a year from the state treasury. The annual cost of this program has been climbing, climbing, climbing over the years, even though nobody really understood it, because it is kind of a shell game, right, between local and state government.

JJ: Well, you’ve kind of answered it. I was going to say, who have been the big winners? Who’s losing out, who’s on the other end of the deal? 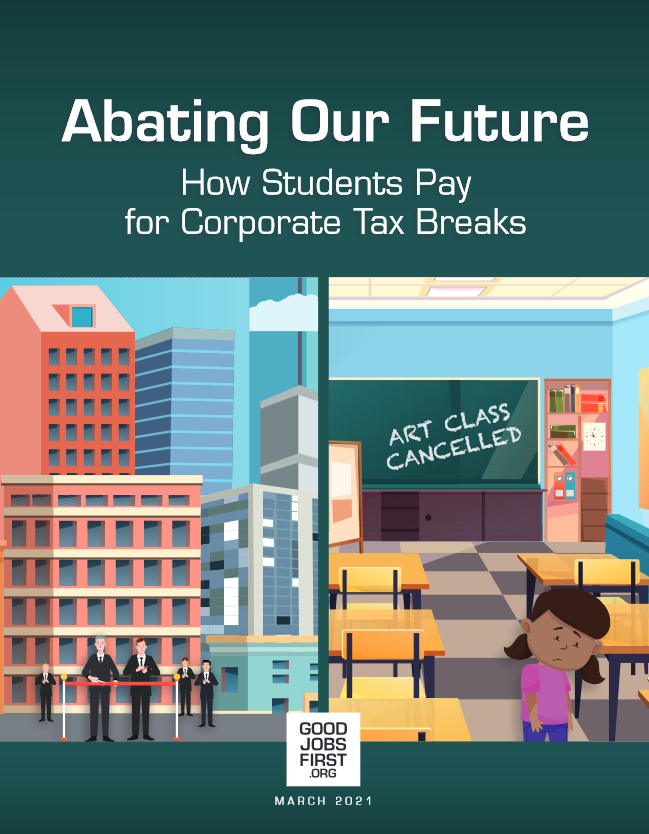 GL: I would say both state taxpayers and local taxpayers. We issued a study back in March, in which we documented that 52 school districts in the state of Texas lose more than $1,000 per student per year to corporate welfare. And the biggest, but not the only, culprit behind those numbers is Chapter 313. It’s just a big net loss for public services generally. And schools will always be the biggest losers in that equation, because education is the most expensive local public service.

JJ: Well, that explains the title of the Houston Chronicle series, “Unfair Burden”…

JJ: …led, I believe, by Mike Morris and John Tedesco. And it seems they just checked the receipts on the promises these companies made in exchange for these subsidies. What was key from that series, and/or other investigations into the extent to which corporations were keeping the promises that premise these deals?

GL: Yeah, the big series by the Houston Chronicle can’t be under-applauded, frankly. They really, as you said, checked the receipts. They said, “First of all, let’s look at how we’re doing on job creation here.”

And, in many cases, we’re barely getting any jobs out of many of these deals. Because when you subsidize making a plant more capital intensive, well, by definition, that can often mean fewer jobs over time. They also looked at the financial impact on public services. And they looked at the long-term impact that’s creeping up on the state costs. It was a soup-to-nuts investigation, and they basically said, by every measure, what we think we’re supposed to get out of these things—which is, top of the list obviously, these jobs and additional tax revenue—we’re actually not getting much of either, and we’re losing a lot of revenue. 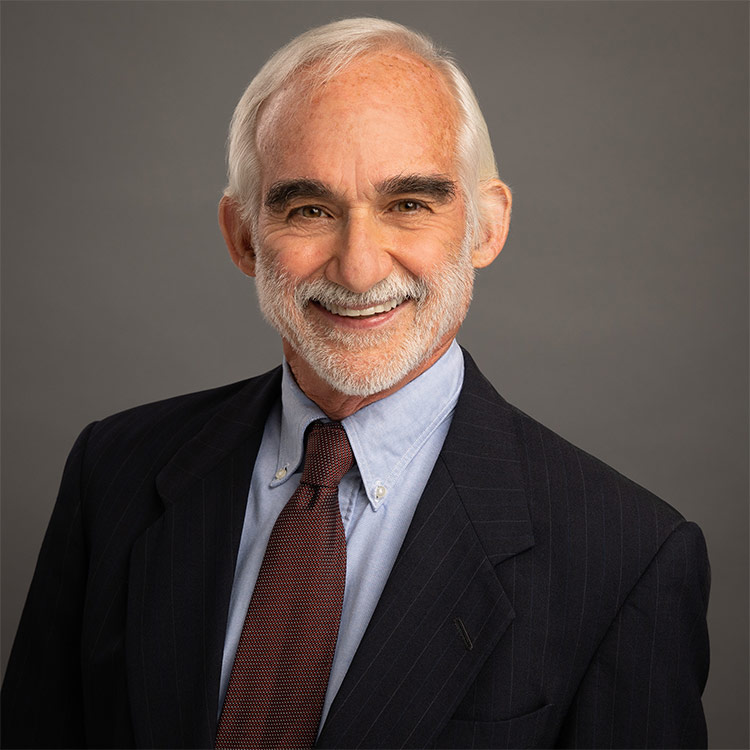 JJ: Yeah, one of the things I noted was that hardly any applications were being denied, like 2.5% of them. It was kind of, “If you say you want it, you get it.” They found companies announcing they were going to move to Texas before they even applied for the waiver. So it wasn’t an incentive at all.

And Dick Lavine—who I saw on your site cited from the group Every Texan—he talks about research that says that 85% of projects that got abatements would have gone to Texas anyway because, after all, it has to do with, if you’re talking oil and gas, it’s what’s in the ground. That’s where they want to be; it’s not a matter of taxes.

GL: Yeah. And just to flesh out that cast of characters that came together here, it really was kind of a perfect storm. So the progressive state tax and budget group is called Every Texan, and Dick Lavine there has been all over this thing since the first time it was enacted 20 years ago. On the right came the Texas Public Policy Foundation, a libertarian think tank, which decided to weigh in against this, because we were picking winners and losers, and government is trying to shape industrial policy and so on, and hurting public services.

Then the faith-based network, the Industrial Areas Foundation, they have 13 community groups around the state, they weighed in against this, because of the harm to public education, and the fact that they are very big about a pro-family agenda. Even the Texas AFL-CIO issued a statement against it, which was unusual, because there are a modest number of union jobs in some of the facilities on the coast. But they basically were very blunt, saying, “Even our members aren’t really benefiting very much, because the job creation is so modest, and the harm to public services is real and big.”

JJ: Right. And according to the Chronicle, only one company ever had to repay a tax break for failing to meet the job creation target…

JJ: …even though lots of them have fallen short.

Can we just pivot for a second to the origin story, which, I mean, proponents were brandishing this industry magazine and said, “Texas is losing out! We’re 37th in the country on bringing in manufacturers.” But what was the reality there?

GL: In 2001, the most influential of several magazines that talk about state economic development trends—it’s called Site Selection—published the annual ranking, which erroneously said that the state had captured three projects, because there was a typo; it should have been 73. And instead of saying “73,” by having only three deals captured, the state ranked very low among the states.

GL: The fact that nobody checked that, that nobody looked at that number and said, that’s impossible.  We’re a huge state, we’re the second biggest state in the country; there’s no way we’re not going to have a lot of deals, right? These rankings are not based on proportionate rates; they’re just absolute number rankings. That’s a crazy number.

Instead, the chamber and other business interests used it to say, “Oh, we got to have a new tax break. We’ve only got three deals. The sky is falling.”

JJ: Wow, wow. Well, it does matter that it’s energy companies at the center here in Texas, and in Louisiana, because, of course, bigger picture, if those companies in particular had to really pay the real costs of doing business, that would really change incentives and priorities in the direction that we need to survive, and stuff like that. It matters that it’s energy here. 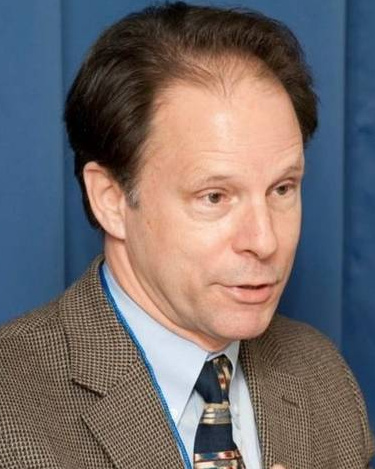 Greg LeRoy: “If fossil fuels paid their full freight for their extraction and their burning, we’d have a very different incentive system for getting to renewables.”

GL: It does. And the same issues play out in Louisiana, where groups that we’ve been working with have been fighting this for a long time too. They don’t call the lower stretch of the Mississippi “Cancer Alley” for nothing—the stretch between Baton Rouge and New Orleans—because it has a very high rate of cancer, mostly in communities of color, neighboring facilities along the Lower Mississippi. And certainly the same issues apply to many, many parts of Texas as well; not to mention the climate change issues, and Hurricane Harvey is Exhibit Z of the problem. So, yes, if fossil fuels paid their full freight for their extraction and their burning, we’d have a very different incentive system for getting to renewables.

JJ: Finally, there’s a great quote in Alleen Brown’s Intercept piece, from Broderick Bagert of Together Louisiana: “In a lot of cases, it’s not that these battles have been lost—they just haven’t been fought. What you’re seeing for the first time is the battles being fought.”

Now we know that industry is going to keep fighting for these subsidies, but it seems like, and you’re citing the wide range of folks who came together in coalition—some folks have seen some daylight on an issue that they might not have expected. They’re not giving up either, are they?

GL: I think Bagert’s point is exactly right: In many cases, the tax break industrial complex has not been challenged. And it’s been in place so long, people just take it for granted because it’s been on autopilot all these years. It might actually be a lot more vulnerable than people think.

JJ: We’ve been speaking with Greg LeRoy of Good Jobs First. They’re online at GoodJobsFirst.org. Greg LeRoy, thank you so much for joining us this week on CounterSpin.

GL: Thanks so much.

The post ‘The Tax Break Industrial Complex Has Not Been Challenged’ appeared first on FAIR.