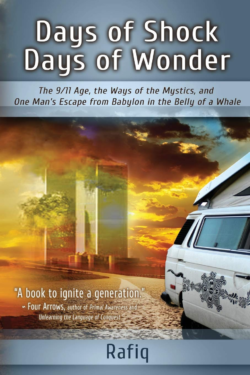 Day 509 of the pandemic. If you’re reading this letter, you still have some freedom. Don’t take it for granted. And don’t ask, why didn’t you warn me earlier? Don’t say, I would have resisted. That isn’t true. We don’t know how to resist. That’s why we bow our heads and follow the herd, looking for a consensus in the twitches that go up and down each other’s spines. Like beasts, we are terrified that when the wolf skulks in, the herd will dart and we’ll be left behind. There is strength in numbers, I know. That’s why you feel safe. But you aren’t. None of us are. And now you are reading these words, and the ground begins to sway. The chair is against the wall, it says. And you can’t look away anymore. Somehow, you always knew that these words would find you, and you know exactly what they mean. Everything has gone to shit! Yes, and we have to find our way back.

Don’t think that because I’m not there with you in the Occupied Zone, I don’t get what’s going on. I see things more clearly because I’m here, free of the hysteria. You shouldn’t underestimate the pull of the herd. Its force is hypnotic, especially when we’re afraid. A child in danger doesn’t wonder whether he should listen to his mother. Threatened, he obeys her warnings. The words that she speaks go straight past his thinking mind, free of scrutiny, and get lodged in his subconscious. If they didn’t, he would soon end up dead. But the same thing happens when a child is told how to be a good boy and fit into the herd. Afraid of being left out, he doesn’t ask whether what he is told makes sense. He believes it. That’s how hypnosis works. Fear induces a trance that lets anyone with authority tell us what to do without us questioning the truth of what it is said. Once implanted, the commandments become dogma.

When the World Health Organization announced that the spread of the virus was a global emergency, I was in a small town full of travellers from all over the place. If the virus was afoot, it was already here or would be soon. Called home by their government leaders, most people left. But some of us stayed. To me, it looked like we were going to watch flu deaths in real time that winter. Some nasty people wanted us all to be very afraid. Of course, it was too early to know whether the virus would be worse than the flu, and you might think that I was wrong. But all-cause mortality was no higher in 2020 than in recent years. Replaced by Covid-19, not only did the flu season vanish in many parts of the world, but most causes of death, from pneumonia to heart disease, were also blamed on Covid-19. You want to ask, what about the crowded hospitals? You want to scream, real people died, you know! I don’t deny that. Like its sister, SARS, this virus has killed people who would not otherwise have died, some of them young. I also know that in cities with bad smog like New Delhi and on Native reservations polluted by the mining industry, the virus has been especially deadly. But the numbers don’t lie. There was no global pandemic in 2020.

Last spring, after the town here emptied out, local vigilantes started manning checkpoints on the access roads to keep away travellers. With all the restaurants and hotels closed, families went hungry for lack of work. Twice a week, I made pots of lentils and rice to serve at a food giveaway near the plaza, where the lines got longer as the pandemic wore on. You might say that all of this suffering was necessary to flatten the curve. But that doesn’t explain what has happened since then. You’ve been under curfews and lockdowns there and cut off from your friends. Masks are still de rigueur. Haven’t you wondered why I have it so much easier than you do? I can leave the house whenever I want. The town is overrun with tourists again and life is back to normal. Why should that be? The answer is simple: this is a second-world country without much of a middle class to destroy through bankruptcy. Put another way, most people here are too poor to steal from. This pandemic is about the transfer of wealth from the many to the few, also called piracy. Yes, the world’s overlords are pirates before anything else.

In the first-world countries, we don’t live with our hands in the soil anymore. We stopped fighting for our land long ago. We are born on this planet but can’t claim a bit of it to put a roof over our heads. We’re all renters and borrowers in the grand scheme of things. Here, people still own the earth. It supports families across time. People are dollar-poor but land-rich, even if they have only a scrap that is their own. So they are hard to push around. There is still a lot of the Wild West here. The police have a role to play, but they are not the authority. It was the Cartel that decided when it was time to open the town again, not the state. The Cartel may be thugs, but they are part of the fabric of the culture. They are the blue-collar equivalent of our white-collar criminals. The difference is that the Cartel does not murder by proxy. It’s personal with them. When two of the vigilantes beat up a guy who had Cartel friends, the Cartel executed the leader of the vigilantes, and the rest of them disbanded and melted away. That was when the roadblocks came down and businesses started to open, including the Cartel’s many pharmacies, where it launders most of it money.

Early on, a friend of mine wrote a message in the dust that coated the back windows of his van: Fear the vaccine, not the pandemic. And he was right. The vaccine is far worse than the pandemic. From the start, vaccination has been the goal. For that, the pandemic had to be dragged out. First, they exaggerated the number of Covid-19 deaths. The true survival rate is over ninety-nine percent for anyone younger than seventy and over ninety-five percent for the elderly. Then, when the number of deaths dropped, they wildly inflated case numbers by using a rigged test. Here, the test is too expensive, so only the tourists get it. Without mass testing, there were no false positives to shore up the panic. Another piece of the puzzle was to deny the existence of treatments so that the vaccines could be approved for emergency use. When Mexico City started treating patients with these known drugs, hospitalizations plummeted. You’re thinking, who would start a pandemic just to sell vaccines? But surely you have realized by now that the vaccines are not only about profit. Yes, our overlords are pirates, but they are also dictators. They want control. It stared with the masks, the curfews, and the lockdowns, and now they have us lining up to be injected with a potion that is outright killing people and injuring others. Next, they will force vaccine passports on us. Those who refuse vaccination will be excluded from the workplace and the marketplace. We will be cast as pariahs.

Maybe you were hoping that the vaccines would set us free and that things would go back to normal. That is only because you can’t accept that people would be so evil. The players in this catastrophe held an event in 2019 that simulated the pandemic. You say that it was just a coincidence. They profited madly from the lockdowns and the vaccines. You say that they were being opportunistic. They published a book about how they are going to use the pandemic to enslave us. You say that I’m overreacting. But I’ve also heard you say that absolute power corrupts absolutely. If you can agree that there are people with absolute power afoot in this pandemic, then you must concede that they are absolutely corrupt. Because they have enough money to oversee unelected bodies like the World Health Organization and the World Economic Forum, they have enough power to dictate the policies of our elected governments and to strip us of our rights. Make no mistake, these people have absolute power, and their plans for us are beyond evil. The next piece of the puzzle will be variants of the virus so that the emergency can be extended long enough to bankrupt the middle class, defeat our spirits, and soften us up for the fascist world order that is coming.

I said that we have to find our way back from this madness. But I don’t know what steps are possible when most of the people who should be resisting don’t realize that they are under assault. At the same time, perhaps I should be optimistic since censorship is now so commonplace that it can’t be denied. Controlling the Covid-19 narrative by suspending social media accounts and deplatforming websites is as totalitarian as any tactic ever used by the Soviets or East Germans. People can see what is happening. It’s all out in the open. To be branded a conspiracy theorist is no longer to be identified as a lunatic but to be recognized as someone who can see the obvious: the Covid-19 narrative cannot brook descent and debate because it is built on lies.

If we don’t resist now, our only hope is that the human spirit will save us. It will take time for that to happen, but no tyranny has ever withstood it. When things get bad enough, our souls will rebel. As Cohen wrote,

Any system you contrive without us
will be brought down
We warned you before
and nothing that you built has stood
— Leonard Cohen, The Energy of Slaves (1973)

It will be so again.

The post The Chair Is Against the Wall: A Letter to the Occupied Zone  first appeared on Dissident Voice.

This content originally appeared on Dissident Voice and was authored by Robert Sean Lewis.