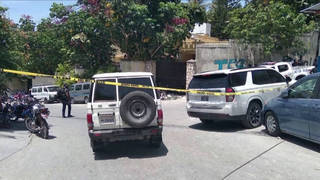 The interim prime minister of Haiti has declared a state of siege and imposed martial law following the assassination of President Jovenel Moïse, who died in an armed attack on his home. The first lady of Haiti was injured in the attack and airlifted to a hospital in Miami, where she is reportedly in stable but critical condition. Haitian authorities say police have killed four suspects and detained two others, but the individuals have not been identified. No evidence linking them to the assassination has been made public. It is unclear who is now in charge of Haiti, which was already facing a political, security and economic crisis prior to the assassination of the president. Haitians are “in mourning,” whether they supported Moïse or not, says Guerline Jozef, co-founder and executive director of Haitian Bridge Alliance. “Today the streets of Haiti are empty because people are trying to make sense of what just happened.” She calls on the Biden administration to stop deporting Haitians and to allow more people who fled to the U.S. to apply for temporary protected status.