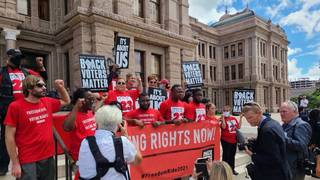 As President Joe Biden met with civil rights groups this week to discuss how to fight voter suppression efforts, Texas lawmakers followed other battleground states controlled by Republicans with a new push to overhaul the state’s election laws. New restrictions would include a ban on drive-thru voting and 24-hour or late-night voting options, and election officials could be penalized for sending out unsolicited absentee applications. The measures would also impose stringent signature-matching requirements and increase the power of partisan poll observers, which can result in intimidation. “This would make it the worst voter suppression bill in the country,” says Cliff Albright, co-founder and executive director of Black Voters Matter, who urges Democrats across the United States to take part in walkouts and other maneuvers to impede voter suppression bills. “What we need right now, along with civil disobedience on the streets, is legislative disobedience,” Albright says.

[1] As Texas Pushes “Worst Voter Suppression Bill in the Country,” Activists Call on Biden to Do More | Democracy Now! ➤ http://www.democracynow.org/2021/7/9/texas_voter_suppression