Janine Jackson interviewed Vivek Shandas about climate impacts for the July 2, 2021, episode of CounterSpin. This is a lightly edited transcript. 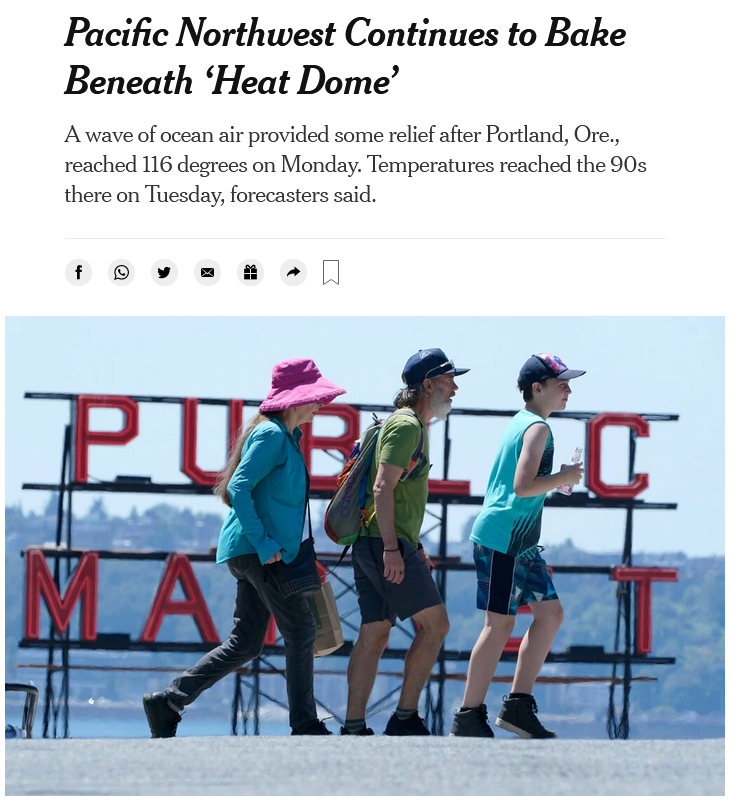 Janine Jackson: If the event is a condominium collapse in Florida…a wildfire in California…a record-breaking heatwave in the Pacific Northwest, the story is climate change, and how poorly prepared we are societally to address it. Which makes it borderline surreal to read reports, like that in the June 29 New York Times, that describes oppressive heat in the Pacific Northwest as “buckling streets” and “driving up emergency room visits,” but takes care to tell readers early on that “tying a single heat wave to climate change requires extensive attribution analysis.” The group Media Matters notes that over the past weekend, broadcast and cable TV networks ran 35 segments on heat in the Pacific Northwest, only eight of which mentioned “climate.”

It isn’t that individual reports lie; it’s the failure of corporate media as a whole to take climate disruption as a given—a devastating given—and then to devote commensurate energy to actual plans to address it now. Which means decentering the voices of politicians and interested power players in favor of those doing the work—to mitigate the harms climate change is already inflicting, and to lead us, forcefully, away from the cliff. Every event is an opportunity for changing that conversation in a useful way.

We’re joined now by Vivek Shandas. He focuses on the implications of climate change on cities as a professor at Portland State University. He joins us now by phone from Portland. Welcome to CounterSpin, Vivek Shandas.

Vivek Shandas: Thank you, wonderful to be here.

JJ: Coverage and conversation about climate change often talks about “the planet,” or what’s going to happen to “all of us.” But we know that the impacts of climate disruption are not distributed equally, or equitably. I know that you do work about who suffers most when we have extreme weather events, like the current heatwave in the Pacific Northwest. Could you talk a little bit about that?

VS: Yeah, absolutely. Often what we’re hearing about climate change is this global phenomenon. And so I want to just start with that idea, in that we have now, going back to the 1950s—in fact, there were oil company scientists who were convinced in the 1950s that the emission of these massive amounts of carbon dioxide and other greenhouse gases would lead to a potential forcing of, and destabilizing of, the climate system as a whole. And that’s now over half a century, established science that’s been growing over time, and we had some real interest in this global phenomenon.

Where the conversation is increasingly going, and where we’re trying to move it, is to get it down into much more of an everyday experience, of something that communities need to be far more prepared for and far more safeguarded from—and that takes place at our local neighborhoods, at our streets, in our cities as a whole. And so, the conversation’s starting to move in that direction.

And while we’re talking about the increasing precision of the science that’s emerging, we’re also starting to see, at this very localized level, the pernicious effects of what happens when a climate and a planetary system does become dysfunctional, from what we’ve known from millennia in the past.

Part of what we’re seeing now is this ability to describe, in incredible detail, how an individual street, how a city block, how a neighborhood really feels some of these most acute effects of, for example, a heatwave that’s just come through my city of Portland, Oregon, and who are the people who are most affected by these heatwaves. And we’ve been able to chalk this up to a variety of different factors, namely factors that related to race-based planning and segregation efforts that took place almost a century ago, that are coming home to roost today. And that’s what we’re starting to see these disproportionate impacts around.

JJ: Let’s talk a little bit in detail about that, because I understand that you’ve been able to find actual temperature variations between neighborhoods, yeah?

VS: Right. So, generally, when we talk about the weather we see on the news or in newspapers or radio, we hear about the high that’s going to befall a city or a region, and sometimes we get a little bit of variation across cities within a metro region. So what that essentially does is it creates this kind of one temperature for an entire city. And what that also suggests is that Mother Nature is throwing this thing at us, and we really have no agency; we have nothing we can do about it.

Though, when we get into the specific measurements and descriptions of differences by neighborhood, we’re then able to see that the actions where we’ve taken in past planning and design can be directly attributable to the experiences that communities and infrastructure and ecosystems have at the local level. And so when we start seeing those differences, what that suddenly suggests is that we have some agency, we have some control over what our everyday experience is like when it comes to these heatwaves, flooding events, various forms of climate-induced impacts, as they fall upon our cities as a whole.

So what we’ve been able to find is that cities vary by upwards of 15, sometimes 20 degrees Fahrenheit. In fact, the heatwave that came through the Pacific Northwest, during the heatwave, I was really lucky and fortunate to have some very sensitive temperature and humidity measurements that I was able to go out and collect around the region, and found that while the news media were saying, you know, “It was 115 degrees on Sunday,” I was able to go out and actually clock neighborhoods at about 124 Fahrenheit with these sensitive thermometers.

I even went by a few houseless encampments that were along a busy street, and I was able to use a little infrared camera to take photos of various tents that were set up. And I could see silhouettes inside the tents, so I knew there were people inside. And I noticed that these tents were coming in at about 135 Fahrenheit.

VS: And that’s lethal, when you’re talking about communities that are completely exposed to this kind of heat coming through, and very limited preparation or outreach that I noticed was happening in and around the region.

JJ: Right. And so you’re talking about things like, “Hey, if you’re in an affluent neighborhood, you probably have more trees.” And that is a material difference in terms of how you’re going to experience a heatwave. 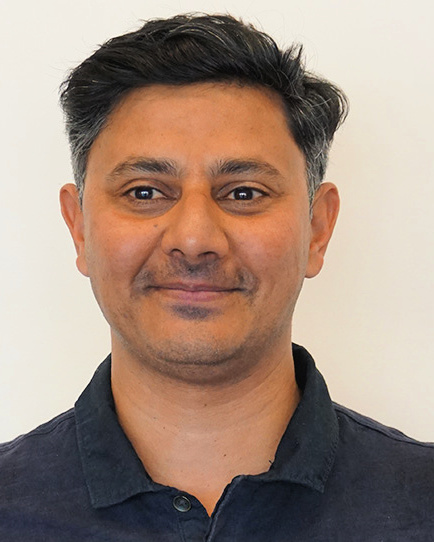 Vivek Shandas: “Wealthier communities have been designed to have more trees, because of a variety of racial covenants and redlining policies.”

VS: Yes, trees are often the first go-to, because they are incredibly efficient in their ability to draw water up from the deep soil and transpire it out their leaves, change the humidity around the local environment, provide that shade—all of these things help cool that local environment. And, yes, wealthier communities have been designed to have more trees, because of a variety of racial covenants and redlining policies that were promulgated 80 to 100 years ago that still maintain their fingerprint, or their kind of echo, today.

And so what we’re seeing is that these trees directly do help, though what we’re also seeing is that the amount of space for being able to get trees into the ground is much larger in wealthier, often whiter neighborhoods—meaning racially whiter neighborhoods—of cities. Whereas lower-income communities of color, often Black, Latino, Indigenous communities living in cities, due to historic segregation policies, are living in places that have far less space for trees, let alone all the other potential factors that lead to the amplification of heatwaves.

JJ: We know that public policy relies on public opinion, and opinion relies on experience. So there’s a real relationship between thinking, “Well, that heatwave was bad, but it wasn’t so bad for me,” or “Well, I don’t live on a coastline,” or whatever.

And, also, people have things on their mind; they may have lost their job, their kid might be sick. How do we work on engaging people in an incredible problem that might still be abstract for them, based on this just differential impact?

VS: It’s interesting, specifically in the Pacific Northwest, where a lot of the houses—even middle-income, higher-income homes—don’t have a history of having air conditioning. And so, what’s particularly noticeable for me in this particular event of a 115+ degree heatwave coming through, is that there were a number of people who often don’t step up and show up for those conversations about inequity, actually coming up and saying, “Hey, this is really hot; we are not well-prepared.” And I was hearing a lot of that over the last few days in the Pacific Northwest.

Though, to get to your point more directly: I think the idea of public opinion of folks who may not be necessarily directly engaged with the conversation, one of the most important parts of this is, for us, showing evidence about what is it that’s happening in and around a region. We have been very ambitious in going out and engaging communities that are often at the frontline of the heatwaves—those who are working outside—working through community-based organizations, to go out and collect evidence around “What are we seeing?” Often, this is the invisible side of things; we don’t see the differential effects because we are not directly experiencing, though I am able to show you that your block, which is just a couple of blocks away from another neighborhood, is actually 15 degrees cooler, in terms of temperature, than just a walk’s distance away.

And so, when we can start describing these differences in what the experience is, we can start to really have conversations about why those patterns exist, what may have led to them. And, ultimately, engaging in those conversations could lead to actions that would allow communities to then change public opinion about where we prioritize resources, how we center historically marginalized communities in reducing the impacts of heatwaves, which, as we know, kill more people than all other natural disasters. And so that’s something that we really ground ourselves in, is this evidence and descriptions of what is happening just outside of our houses, within our neighborhoods, and across our whole city.

JJ: We’ve been speaking with Vivek Shandas, professor at Portland State University. Vivek Shandas, thank you so much for joining us this week on CounterSpin.

VS: Sure, my pleasure. Thanks for your interest in this topic.

The post ‘That’s Lethal, Communities Completely Exposed to This Kind of Heat’ appeared first on FAIR.