In the latest phase of her record sentence for whistleblowing, former National Security Agency linguist Reality Winner is a short drive to the blazing hot summertime beaches on Texas’s Gulf coast. But she can’t get near them. She can’t even go into the yard of a neighbor who invited her to aid in his beekeeping project.

Convicted under the Espionage Act for having shared a classified document on threats to election security with the media, Winner has been released to home confinement but wears an unwieldy ankle bracelet. It beeps even if she strays too far within her family’s yard.

Not wanting her to miss out, a high school friend showed up on a recent day with a kiddie swimming pool and some sand. “Mom, I’m going to the beach today,” Winner said, her mother Billie Winner-Davis recalled. The pair filled the kid’s toy and Winner waded in.

Winner’s family and friends are thrilled to have her home after four years behind bars — a stint that took miserable turns as her release date neared. She contracted Covid-19 as part of a mass infection in her prison, filed a sexual assault complaint against a guard, and went thirsty and cold when her facility lost heat and water in February during Texas’s deadly winter storm.

Despite their elation that she is out of prison, though, Winner’s family and friends say she is far from free. Every day is still marked by intrusions, like the app carceral authorities require her to put on her phone to monitor her and needing prior approval to go to Walmart with her mother for errands. Winner is projected to be transferred from home confinement to supervised release in November.

That’s why they are continuing their year-and-a-half-long campaign for a presidential pardon or clemency, saying the whistleblower is being gagged from telling her own story.

Winner-Davis added that Reality, who is under a gag order, is also banned from using social media, a condition her attorney, Alison Grinter, said is normal and up to the discretion of halfway house authorities.

Grinter, speaking recently on “Democracy Now,” said a pardon for Winner is both something she and her country deserve. Winner is currently serving the longest prison sentence of its kind under the Espionage Act, a World War I-era law used in recent years to send journalists’ sources to prison, even as comparable defendants have simply gotten probation for charges of mishandling classified information.

The government itself acknowledges that Winner’s intent was to send the document she leaked to journalists and therefore warn the American public, rather than use it for personal gain. The NSA report detailed phishing attacks by Russian military intelligence against local U.S. election officials and was published in a June 2017 article by The Intercept. (The Press Freedom Defense Fund — which is part of The Intercept’s parent company, First Look Institute — supported Winner’s legal defense.)

Released from a Fort Worth, Texas, federal prison one day shy of the four-year anniversary of her June 3 arrest, Winner’s path to her parents’ remote southern Texas home was a bumpy one. The journey began with a 23-day quarantine with five other women in a hospital patient-sized room. After that, her family picked her up for a long drive down through Texas in which they had a matter of hours to deliver her to a halfway house, where she stayed for a week before being released to her rural childhood home. There, paper labels with Arabic vocabulary words are still taped to household items — early remnants from the series of events that would lead her to prison when, as a teenager eager to learn foreign languages, she signed up for the military.

Taking advantage of the window of time they had with her as they drove her to the halfway house, her family and close friends planned a series of surprises. Winner met her infant niece, whom the whistleblower had only seen on video chats and Shutterfly-printed postcards, due to visitation bans at prison amid the pandemic.

While sitting in her parents’ car and sorting through her belongings, she saw the blond hair of her sister, Brittany Winner, in the distance in a park and tried to jump out of the moving vehicle. “She dropped everything on her lap and just ran,” her mother said. “She ran to Brittany and the baby.”

Her sister said the whistleblower was trembling, still unnerved by a guard who had told her that morning that she would not be released. “Just the look in her eyes, she almost looked, like, dead, so traumatized and not really believing that everything was happening,” Brittany Winner said. “And, at some point, I was talking to her, she just reached up in the middle of my sentence to touch my face, and she said, ‘You’re real, right?'”

At the southernmost point in their trip toward home, two other loved ones were waiting for her: Wendy Collins, a family friend from Philadelphia who spearheads a social media campaign calling for her pardon, and Collins’s partner.

They ate at a Thai restaurant as they counted down the minutes to her report time to the halfway house. Collins hugged the whistleblower for the first time since their friendship and Collins’s tireless advocacy began.

Collins said, “I flew for the hug.” Reality Winner gives her dog a kiss as they play outside at her mother’s home in Kingsville, Texas, on July 3, 2021.

Photo: Christopher Lee for The Intercept 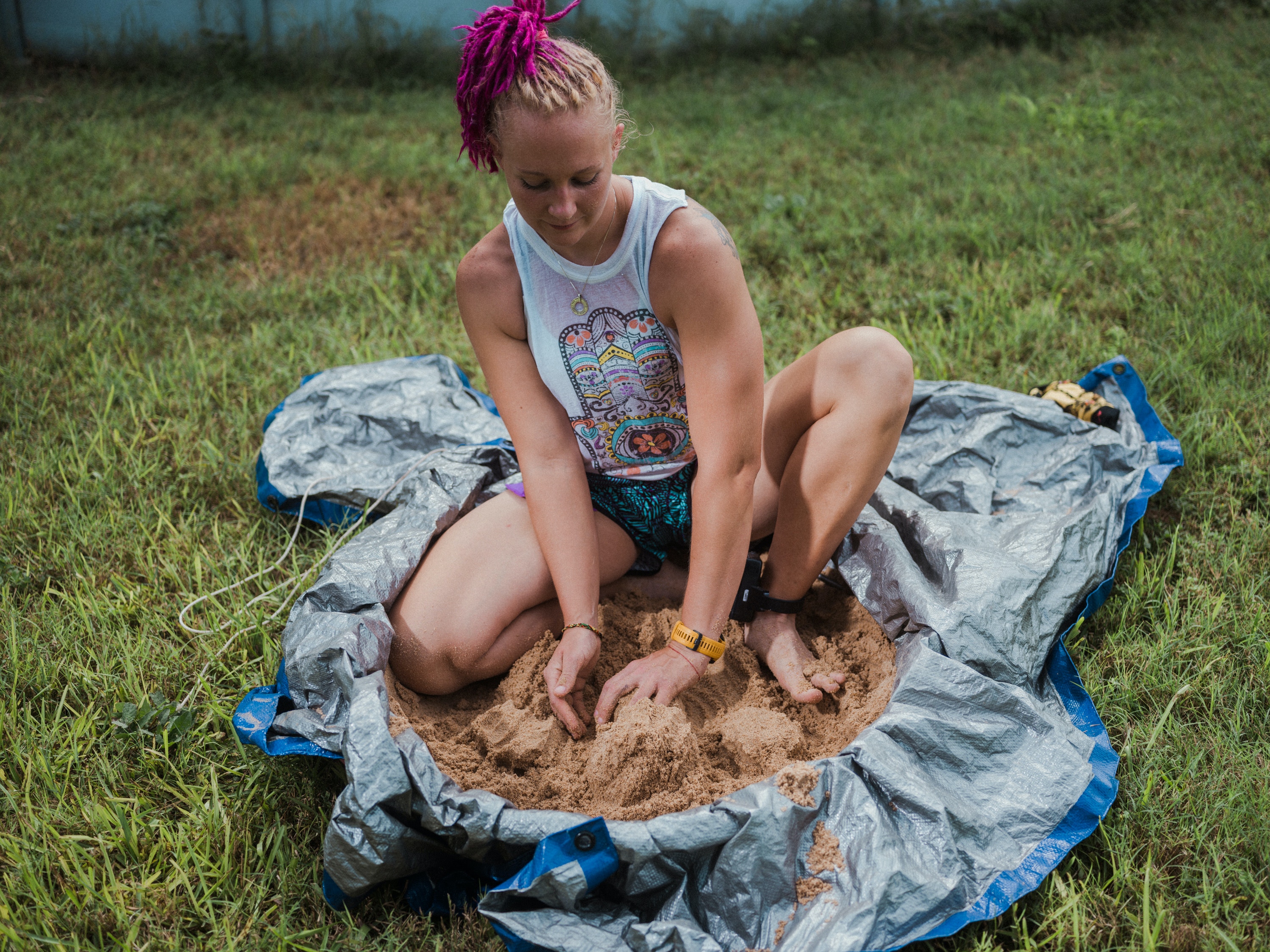 Reality Winner sits in a tarp full of beach sand, brought to her by a friend, at her mother’s home in Kingsville, Texas, on July 3, 2021.

Photo: Christopher Lee for The Intercept

At her family’s quiet home, Winner schedules her days in an orderly way, similar to her life before the arrest — time slots for online yoga courses, cycling exercise routines, and a new part-time job as a researcher for a documentary filmmaker. She relishes spending time with her family dog, Domino, and cat, Fiona, since Winner lost ownership of her own pets, a dog named Mickey and cat named Mina, in the chaos after her arrest. In her down time, she sorts through books supporters have sent her and boxes of belongings from her Augusta, Georgia, home, which was raided by a fleet of armed federal agents whose interrogation of Winner would later be characterized by the government as a voluntary interview — one in which she was never read her Miranda rights.

When the heat breaks in the evenings, her mother says Reality prefers to not watch TV, opting instead to breathe in fresh air on the back patio.

“She’s seen people from all walks of life just be completely taken advantage of by the system, especially people of color. And that is something that she just can’t tune out.”

Looking toward the future, when she can speak publicly and take more control over her life, her sister said she expects the whistleblower to advocate for incarcerated people. “She’s seen people from all walks of life just be completely taken advantage of by the system, especially people of color,” Brittany Winner said. “And that is something that she just can’t tune out. She can’t just live her quiet life.”

When she’s free to go to the water — the Gulf of Mexico, not the kiddie pool out back — the whistleblower hopes to go the Texas shoreline to plant mangroves, something Winner, long an environmental advocate, told her sister she wants to do in order to heal coastal ecosystems.

Grateful for even this incomplete freedom, the sisters send each other a near-constant flurry of updates. Not a day goes by when she and her sister don’t exchange 50 or more text messages and phone calls, including baby photos and videos of Reality practicing yoga with her ankle bracelet in her parents’ garage. “I feel lucky to have my sister back,” Brittany Winner said. “And one of the things that I was scared of was that she was going to be changed — you know, like damaged, like she wasn’t going to be the same person because of four years in prison.”

“How can that not mess you up? But despite the trauma, I feel like she’s the same,” she said. “At least with me. She’s the same person.”

This content originally appeared on The Intercept and was authored by Taylor Barnes.