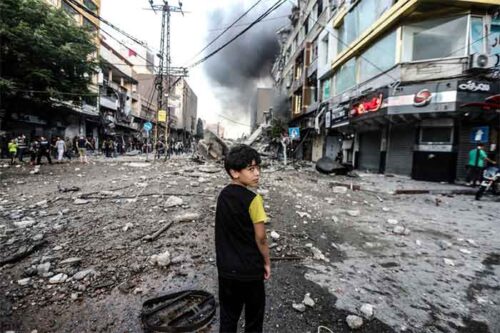 The Omar al-Mukhtar neighborhood of Gaza City after it was pounded by Israeli airstrikes, 12 May. Mohammed ZaanounActiveStills

The world needs to  know the horrendous dimensions of the ongoing Palestinian Genocide, and of the gross Apartheid Israeli maltreatment of 5.2 million Occupied Palestinians and in particular of the 2 million inmates of the blockaded and bombed Gaza Concentration Camp. A numbers-based summary of these ongoing  atrocities will strengthen global Boycotts, Divestment and Sanctions (BDS) against the intolerable obscenity of Apartheid Israel and its racist supporters.

(A). Background of the ongoing Palestinian Genocide.

Gaza per se dates back over 3,000 years and “Palestine” and related terms (e.g. “Falastina”) come from the Philistine inhabitants of circa 1,200 BCE.

The ongoing Palestinian Genocide  has been associated with 2.2 million Palestinian deaths from violence, 0.1 million, and from imposed deprivation, 2.1 million, since the British invasion of the Middle East in 1914 for oil and imperial hegemony – in contrast, 4,000 Zionists killed by Palestinians since 1920. Christians are only 1% of the Palestine population today.

The Australian Light Horse Charge at Beersheba (31 October 1917) was pivotal to the defeat of the Turks. The UK Balfour Declaration giving Semitic Palestine to the non-Semitic and genocidally racist Zionists was issued 2 days later (2 November 1917) in a quid pro quo connected with getting Zionist Jewish Communists to try to keep Russia in the war against Germany.

On 10 December 1918, the Surafend Massacre of about 100 Palestinian men and boys was carried out by Australian and New Zealand Army Corps (ANZAC) soldiers.

Overt Jewish immigration was stopped by the British 1939 White Paper designed to pacify British Muslim subjects during WW2. Circa 1944 the British War Cabinet secretly decided to Partition both Palestine and India, supporting European Zionists and Indian Muslims, respectively. Racist mass murderer and pro-Zionist Winston Churchill hated  Indians (“They are a beastly people with a beastly religion.”), hated Indigenous Palestinians, Indigenous people of North America, and Indigenous Australians  (“I do not admit for instance, that a great wrong has been done to the Red Indians of America or the black people of Australia [i.e. Australian aborigines]. I do not admit that a wrong has been done to these people by the fact that a stronger race, a higher-grade race, a more worldly wise race to put it that way, has come in and taken their place.” Source.), and hid the WW2 Bengali Holocaust for which he was responsible (6-7 million Indians deliberately starved to death for strategic reasons by the British with Australian complicity).

1966, Palestinians in  Israel given Israeli citizenship, albeit qualified  under race-based laws (presently over 60 such laws).

1967, a now nuclear-armed Apartheid Israel attacked all its neighbours and seized territory from all of them, including the Sinai (Egypt), Shebaa Farms (Lebanon), the Golan Heights (Syria) and 100% of Palestine; 400,000 Arabs expelled in the Naksa (Setback). US Alliance-backed Apartheid Israel presently has 90-400 nuclear weapons as well as biological weapons,  chemical weapons and delivery systems.

2021, over 90% of Palestine ethnically cleansed of Indigenous Palestinians; Tom Pickering,  former US Ambassador to Israel and the UN, says Israel would concede only 4.4%   of Palestine for a Palestinians State in a “2-state solution”, and predicts future complete Palestinian removal from the West Bank and Gaza to elsewhere in the world (a “no state solution”).

Apartheid Israel rules all of a 90% ethnically cleansed Palestine (plus ethnically cleansed parts of Syria and Lebanon) and of its 14.4 million Subjects, 6.8 million (47.2%) are Jewish Israelis, 0.4 million (2.8%) are non-Jews and non-Arabs, 2.0 million (13.9%) are Palestinian Israelis, and 5.2 million (36.1%) are Occupied Palestinians with zero human rights. Despite a century of a Palestinian Genocide involving killing, deprivation and repeated mass expulsions, 7.2 million Indigenous Palestinians still represent 50% of the Subjects of Apartheid Israel in Palestine, but over 72% of the Indigenous Palestinian Subjects of Apartheid Israel are excluded from voting for the government ruling them i.e. are subject to egregious Apartheid.

(B). Geography and  Demographics of Gaza.

Gaza is the 3rd most densely populated entity in the world.

About 50% are children and about 75% women and children.

In 2006 the Islamic Resistance Movement (Hamas) won a majority in the democratic Palestinian Legislative Council elections held under Israeli guns – Hamas won a plurality of 42.9% of the total vote and 74 out of 132 total seats (56%). The Hamas representatives were variously killed, imprisoned or exiled to the Gaza Concentration Camp or elsewhere by the genocidally racist, nuclear terrorist, state terrorist and  neo-Nazi Israelis who, together with their pro-Apartheid US Alliance backers, declared Hamas to be a terrorist organization.

A wide range of decent people from scholars and human rights activists to religious and political leaders have referred to Gaza as ”an open air prison” ,“the Gaza Concentration Camp”, and indeed as the world’s biggest open air prison and concentration camp.

5.2 million Occupied Palestinians,  50% children and 75% women and children, are highly  abusively and indefinitely confined to the  Gaza Concentration Camp (2 million) or to West Bank ghettoes (3.2 million) without charge or trial but for the asserted “crime”  of being Indigenous Palestinians living on part of the land continuously inhabited by their forebears for thousands of years.

“Coronavirus closure” is applied by Apartheid Israel on top of other draconian restrictions on movement in and out of Gaza.

In the last 2 decades Gaza rockets have killed about 40 Israelis but Israeli reprisals have killed over 4,600 Gazans, an over 100-fold disproportionality.

“Coronavirus closure” is  presently applied to Gaza by Apartheid Israel on top of other draconian restrictions by way of collective punishment.

Apartheid Israel grossly violates Articles 55 and 56 of the Fourth Geneva Convention (the Geneva Convention relative to the Protection of Civilian Persons in Time of War) that unequivocally demand that  an Occupier must supply life-sustaining food and medical services to its Conquered Subjects “to the fullest extent of the means available to it”.

Apartheid Israel stops many asserted “dual function” goods including critical  medical supplies from getting into Gaza.

Economic growth has declined and gone negative in the last 25 years and unemployment has increased.

Trauma and Post-Traumatic Stress Disorder (PTSD): “At least 90 percent of Gaza residents are in need of mental health support and treatment because of the repeated military attacks and devastating humanitarian conditions in the Strip”.

Tens of thousands with life-changing permanent disabilities from Israel violence.

Electricity supplies intermittent and Gaza’s electricity is normally supplied by its sole diesel power plant (nominal rating 60-140 MW) plus 125 MW (from Israel) and 27 MW (from Egypt) for about 300 MW total (Apartheid Israel has 16,250 MW power capacity or 54 times more than Gaza).

Apartheid Israel controls water supply, notably that from the largely West Bank-based Mountain Aquifer with 9.1 million Israelis getting 87% of Mountain Aquifer water whereas 5.2 million Occupied Palestinians get a mere 13%. WHO minimum daily per capita water allocation is 100 litres, Israelis get 240-300 litres and West Bank Palestinians get 73 litres; Israelis have deliberately demolished 50 water extraction facilities in the West Bank. Israeli bombing has destroyed water and sewerage infrastructure in the Gaza Concentration Camp to the point that it is approaching unliveable conditions.

Apartheid Israel leads the world in Covid-19 vaccination for its Israeli Subjects but  refuses to vaccinate its 5.2 million Occupied Palestinian Subjects except for 5,000 front-line medical workers and 120,000 Occupied Palestinians who work in Israel or in illegal West Bank settlement as cheap “captive labour”.

As of  early July 2021 many Occupied Palestinians had died (686 Covid-19 deaths per million of population; 3,565 deaths or about 1% of 314,000 cases) but notional extrapolation to a maximum of 5.2 million cases would indicate that Apartheid Israel has deliberate intent to kill about 50,000 Occupied Palestinians.

Article 2 of the UN Genocide Convention defines “genocide “ as “acts committed with intent to destroy, in whole or in part, a national, ethnical, racial or religious group”.

Genocide experts describe an ongoing Palestinian Genocide. Thus Professor Francis Boyle (University of Illinois) re the Palestinian Genocide (2013): “The Palestinians have been the victims of genocide as defined by the 1948 Convention on the Prevention and Punishment of the Crime of Genocide, under which a government can be guilty of genocide even if it intends to destroy a mere “part” of the group”.

90% of Palestine has been ethnically cleansed of Indigenous Palestinians with Zionists adumbrating 95% and even ultimately 100% ethnic cleansing of the West Bank and Gaza.

Zionist leaders from Theodor Herzl to Benjamin Netanyahu have explicitly advocated removal of the Palestinians from Palestine.

Of 15 million Palestinians today, 8 million are forcibly Exiled from their homeland and 7 million Indigenous Palestinian Subjects of Apartheid Israel live under threat of killing and expulsion.

I have a large, 2-sided and big- black-capital-letters-on-white placard that I take to public rallies in support of Palestinian Humans Rights. One side says WORLD: STOP PALESTINIAN GENOCIDE and the other says BOYCOTT APARTHEID ISRAEL. The Gaza Concentration Camp and the  ongoing Palestinian Genocide shame Humanity and the pro-Apartheid US Alliance in particular. Decent Humanity must (a) inform everyone they can, and (b) urge and apply Boycotts, Divestment and Sanctions (BDS) against Apartheid Israel and all its supporters.

This content originally appeared on Dissident Voice and was authored by Gideon Polya.