Janine Jackson interviewed UC Davis’ William Dodge on Nestlé and slave labor for the July 9, 2021, episode of CounterSpin. This is a lightly edited transcript.

Janine Jackson: At what point do corporations have to be legally accountable for the realities that drive their profits? If you are, for example, Nestlé, and you make your money from cocoa that comes, as most of the world’s cocoa does, from the Ivory Coast, where, according to the US Department of Labor, 37% of children are engaged in “hazardous work”—well, what’s that to do with you?

In the case Nestlé USA v. Doe, recently heard by the Supreme Court, the plaintiffs were six people from Mali who attested to being trafficked as children to the Ivory Coast, and forced to work on cocoa farms that supplied Nestlé—and Cargill, the other defendant—where they were not paid, given scraps of food, beaten with whips and tree branches, locked in dirt-floor shacks and tortured if they tried to escape. They were “Doe” in the case because they still feared, years later, reprisals from former traffickers, owners of and buyers from the farms where they were, let’s just say it, enslaved.

As often happens, this story of humanity and morality was boiled down to legality…and the outcome was confusing, in terms of its implications. Here to help us sort through it is someone who has been engaged in this case and its underlying questions for some time.

William Dodge is Martin Luther King Jr. Professor of Law and John D. Ayer Chair in Business Law at the University of California/Davis School of Law. He joins us now by phone from California. Welcome to CounterSpin, Bill Dodge. 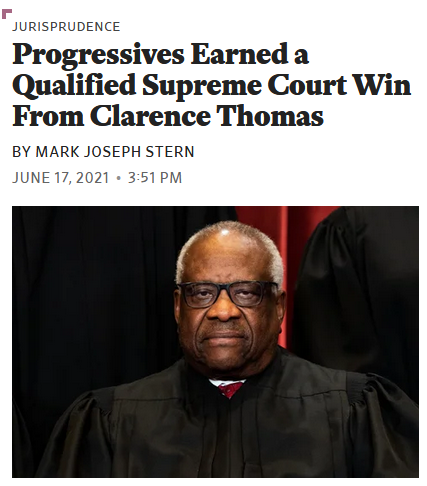 JJ: This is a law story; it’s about what law can be applied where. But we don’t want to lose sight of the reality in back of it, which is child slavery, and that many people want corporations to be accountable for all of the things that put money in their pocket, for them not to be able to say, “What? A farm in the Ivory Coast? I didn’t run that farm,” you know, “I’m sorry if bad stuff happened there, but it’s nothing to do with me.”

So let’s get into this particular case of Nestlé USA, Inc. v. Doe that the Court just heard. The New York Times had a headline, “Justices Limit Rights Suit Against US Corporations.” But then Slate had a headline, “Progressives Earned a Qualified Supreme Court Win From Clarence Thomas.” So it seems like there might be some murkiness around the ruling, or what it means, or where it might lead. Can you talk us through what this 8–1 court ruling said, or maybe didn’t say, or couldn’t say, and what you think it adds up to?

WD: Sure. It can be difficult to make sense of the ruling, and there are different ways of viewing it; you can view the glass as half empty or as half full. As you suggest, the fundamental issue is, what is the responsibility of US companies that are engaged with companies abroad, that—according to the allegations in the complaint—use child slaves?

Now, for a number of years, the court has been wrestling with the question of whether corporations can be sued under this statute at all, or whether it only applies to individual defendants. And the court has ducked that issue on a number of occasions. In fact, the majority opinion ducks it in this case, too, but if you count the votes in the various concurring and dissenting opinions, you find that there are actually five justices now who think that corporations can be sued under the Alien Tort Statute. So that’s a win for the plaintiffs.

So going forward, I think it’s going to be tough for plaintiffs to allege enough to have their cases heard; they’re going to have to allege some conduct in the United States in connection with the slavery abroad that goes beyond just making decisions. And I’m not sure exactly what those cases are going to look like, but I don’t think there are going to be a lot that satisfy that standard. And in that sense, I think this is a defeat for the plaintiffs.

JJ: Let’s talk a little bit about the Alien Tort Statute that was brought to bear here. We’re talking about a metric that was introduced in 1789, right? So I know a lot of listeners are thinking, “Corporations as…wait…as individuals? As people?” And they’re thinking about Citizens United. Has the law grappled with this idea of corporations as people and who’s accountable.… Is the bigger picture that the law has not caught up with how to hold corporations accountable? Or what do you think is going on there?

WD: So you’re right: It’s a very old statute. It was part of the First Judiciary Act that set up the federal courts in 1789. It’s important to realize that international law looked a lot different in 1789 than it does today. There was no international human rights law in 1789; it’s mostly a post–World War II, post-Holocaust development.

But the statute is written in broad terms: It doesn’t limit cases to the kinds of claims that the framers would have understood. It refers to any violation of what they called the “law of nations,” and what we call “international law” today. So we’ve got the development of international human rights law, but we’ve also got the question of to what extent that applies to corporations. 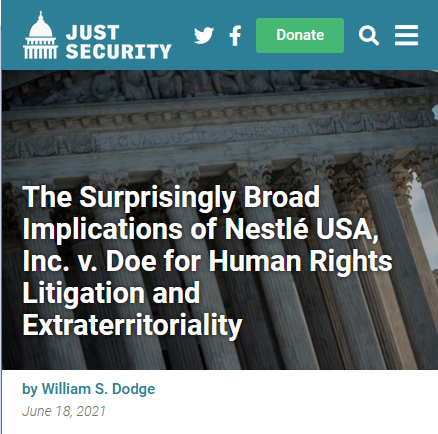 WD: And it’s quite clear that corporations were held accountable by the Nuremberg tribunals, and have been considered responsible for human rights violations in various contexts. So I don’t think there’s a lot of dispute about the idea that international human rights law can apply to corporations. So the question is whether this particular statute applies to corporations. And there’s no limitation in the statute itself; there’s nothing in the text of the statute that suggests that it should be limited in that way.

And while some justices would like to draw that distinction, or have wanted to draw that distinction in past cases, five justices in this case found no basis for doing that—and that includes the three liberal justices plus Justice Gorsuch and Justice Alito, who are not, one would think, particularly sympathetic to human rights plaintiffs—but they just didn’t see a basis for distinguishing between individuals and corporations as defendants.

JJ: I want to be clear: old law is not automatically bad law; just being old doesn’t mean it’s bad. But it does sometimes seem like the tools are not upgraded to the problem, and I think that’s what folks may be thinking. But as part of your piece that you wrote recently, you did say, if we’re talking about stopping forced child labor, this ruling is meaningful, and it’s one thing, but there are other legal tools that folks could use.

So if I could just ask you: Coming out of this, if folks think, “Well, then there’s no way to hold a transnational company accountable in any way for things involved in their supply chain,” there are other legal tools available, yeah? 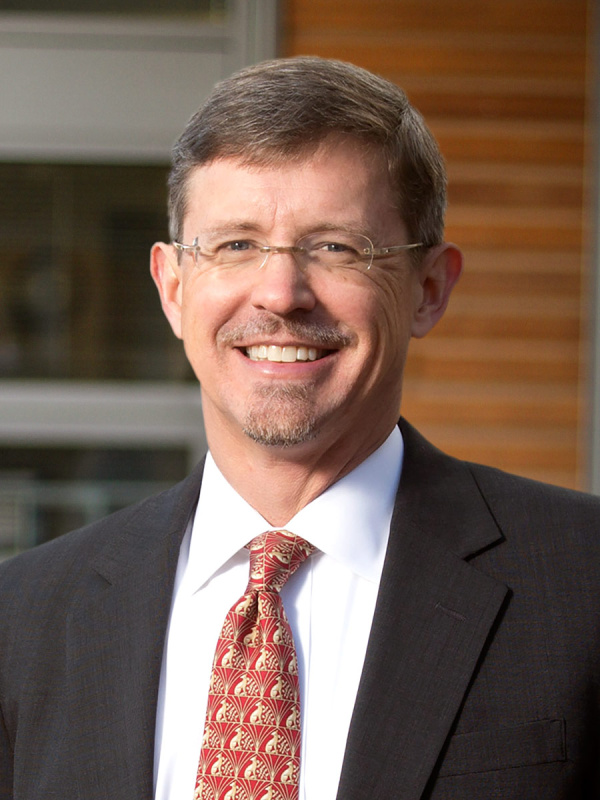 William Dodge: “You can certainly argue that by being able to buy cocoa at a lower cost, because the farms lowered their cost by using slaves, that’s ‘benefiting from.'”

WD: Yes, absolutely. And in fact, going forward, US companies can be sued for involvement in child slavery, or any kind of slavery, or any kind of forced labor, under a different statute. Congress has passed something called the Trafficking Victims Protection Reauthorization Act, the TVPRA. And this statute creates a cause of action against defendants who have benefited from slavery or forced labor. And it’s been used to sue corporate defendants in a variety of different contexts.

Now, unfortunately for the plaintiffs in Doe, it’s a pretty new statute, and it’s not retroactive, which means it doesn’t apply to child slavery that occurred before the statute was passed, which is the case with the Doe plaintiffs.

But it’s a very powerful tool to attack forced labor and child slavery. And the standard that the defendant just has to benefit from that action is a very low standard. Because you can certainly argue that by being able to buy cocoa at a lower cost, because the farms lowered their cost by using slaves, that’s “benefiting from.”

JJ: And I think where the consumer comes in is at that point, because we’re not going to necessarily know what happens behind the scenes, in other countries, in the supply chain. And so folks are looking for the law, frankly, to protect them from being complicit in something like child slavery. It sounds like you’re saying the Supreme Court was not trying to avoid the question, but simply saying that, with the laws at hand, and with this particular case, they weren’t able to do what some folks might have wanted them to do.

WD: I think that there were some problems with the allegations in this case. The justices seem to feel that not enough facts had been alleged about involvement of Nestlé and Cargill. But there is a legal step, then, going forward, because of this other statute, and so one hopes that they will exert more pressure on their suppliers to shape up with respect to their labor practices.

I should stress also that litigation is not the only tool, and it’s probably not the most effective tool, for dealing with these kinds of problems. Many companies have adopted codes of conduct that apply not just to them, but also require certain conduct and certain standards of their suppliers in the supply chain.

It can sometimes be difficult for buyers to monitor their supply chains. I don’t think that’s true in this case. But establishing codes of conduct to prevent the violations from happening in the first place is a far better thing to do than letting the violations happen, and then seeking damages after the fact. We want child slavery to be a thing of the past. We don’t just want the plaintiffs in a case like this to be able to get damages.

JJ: Absolutely. Well, we’re going to end on that note. We’ve been speaking with William Dodge, professor at University of California/Davis School of Law. Thank you so much, Bill Dodge, for joining us this week on CounterSpin.

WD: Thank you very much.

The post ‘US Companies Can Be Sued for Involvement in Child Slavery’ appeared first on FAIR.