So, maybe it didn’t begin there, but is that where it all came together and became the lip signed treaty between President and Party? Was the infamous 2017 around-the-table butt-kissing spectacle the inflection point; the official surrender of the Republican Party to Donald Trump?

They took turns demeaning themselves and the America people, with Reince Priebus offering up the best summation: “On behalf of the entire senior staff around you, Mr. President, we thank you for the opportunity and the blessing that you’ve given us to serve your agenda … and the American people.”

It might have come as a surprise, even to him – not just the willingness, but the seeming eagerness with which they bent over publicly and gave up their human dignity and the charade of serving their country. They were all in. If he hadn’t already known it, Trump must surely have looked around the table that afternoon and realized he could do anything; anything at all and there would be no resistance. “What a bunch of gutless suckers,” he likely thought. “I can work with these people.”

The scene was made more deplorable in knowing the subsistence level of all those present. All were men and women of enviable means. Their economic livelihoods were not at risk. Their families were not held in jeopardy. Each could have stepped away to un-toady respectability and a more than comfortable lifestyle. But none did. They instead made political reality of Trump’s Access Hollywood braggart admission of sexual assault: “They let you do it. You can do anything.”

What if they had laughed when Mike Pence first pursed his lips and commenced the parade of abdication: “It’s the greatest privilege of my life to serve as vice president to a president who is keeping his word to the American people, and assembling a team that’s bringing real change, real prosperity, real strength back to our nation.” What if even just one of them had spontaneously laughed out loud, would it have broken the spell? Could the Party (and perhaps the country) have been saved with some animating laughter at the cringe-worthy pandering?

More than four years have lurched by since that memorable day. They’re not sitting around the adoration table anymore, and many of the faces have changed, but the groveling still goes on. They now pay homage individually with trips to Mar-a-Lago and testimonials on Fox News, Trump TV, or any media outlets offering a kneeling bench.

In absentia, the former president presides over an emasculated Party. Trump’s presidency is now gone, but his will is still here. His Party is still here, but its will is now gone. They are letting him do it. The Republican Party (and American democracy) is dissolving under the acidic tongue of political butt-kissing. The dissolution is too far along. The 2017 potential off-ramp was missed; the spell can’t be broken with awakening laughter. The Republican Party has immolated itself. The residue still left is the Party of Trump. The POT platform has but one unstable pillar: the autocratic will of Trump.

What happened to the once proud, even macho-inclined culture of the Republican Party? How was it so easily seduced into fulfilling the desires of a man whose moral credo is: “They let you do it. You can do anything.”

An acclaimed social psychology study might offer a clue. The Righteous Mind (2012) by Jonathan Haidt explored social/political morality. He examined the perceptions we hold that nudge us towards liberal or conservative stances and often into left-leaning or right-leaning political parties. Haidt delineated a moral matrix of six primary spectrums that influence our social and political leanings: Care/harm, Liberty/oppression, Fairness/cheating, Loyalty/betrayal, Authority/subversion, and Sanctity/degradation. Through widespread survey and scrutiny, he discerned a difference in weighting to the components held by liberal, libertarian, and conservative mind-sets. 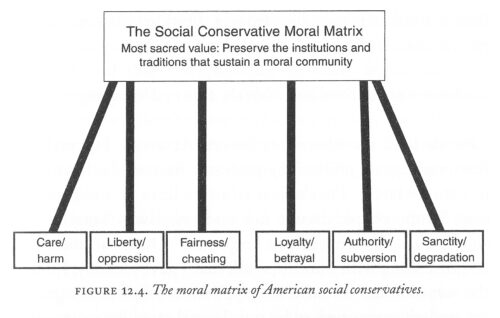 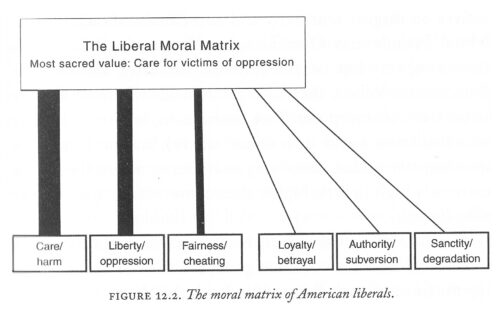 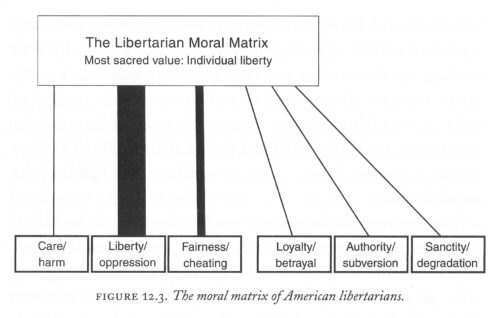 It’s been almost a decade since publication. There appears to be a “new kid” on the block who wasn’t present in 2012. The balanced weighting of Haidt’s conservative moral matrix is not evident in what has become the POT, nor does it conform to either of the other two moral matrix mixes. If its values were charted, it would likely show an extremely heavy line drawn to the Authority/subversion component. It would be the one line of significant breadth. The overwhelming propensity of the POT is to reflect the will of its leader. All other matrix components have been marginalized. The POT is an authoritarian political entity that fell out of the conservative moral matrix once characterizing the GOP.

So what really changed? It wasn’t a wholesale swap of physical bodies. Most of the prior GOP constituency is intact; many of its stewards are still there, but somehow it has managed to mutate into a POT morality with hardly more than a hiccup. How could that be? It’s as if a congregation went to church one Sunday morning, found its traditional god replaced, yet was still able to sing familiar hymns as if nothing of substance had occurred.

The Righteous Mind’s aim was not to denigrate one camp over another, but to explore their differences in hopes of stimulating awareness and receptive dialogue between opposing advocates (its subtitle is, Why Good People Are Divided by Politics and Religion). That said, the transformation of the GOP into the POT begs at least one partisan sounding question: Does the GOP’s morph into the POT indicate that the conservative moral matrix mix is unstable and prone to transmutation? Put another way, despite the air of individualistic bravado, are conservative minds more easily manipulated into abandoning former values and embracing authoritarian voices?

Again, looking at the charts, the liberal moral matrix is moored to Care/harm and the libertarian matrix is tethered to Liberty/oppression. It’s only the conservative moral matrix that is equally weighted, showing no anchor to any particular component. Is that a clue to its apparent instability?

“Equally weighted” usually speaks to stability, but as a moral matrix feature, it means just a little weight added to any component makes that component dominant. The conservative moral matrix has no preexisting heavily weighted component to resist such manipulation. With relatively little effort, a demagogue can add a thumb to the weight of any component, suddenly giving it (and the demagogue) overriding influence.

The conservative moral matrix is not moored to the Care/harm component, nor is the libertarian matrix. Both are thus susceptible to bypassing or devaluing its import. Broadly speaking, Care/harm is a measure of one’s sensitivity to the distress and well-being of others. Its exclusion or downplay is dangerous to humanity. A political party without Care/harm sentiment is like a physician without a “first, do no harm” principle; pretext is easily justified and ruthlessness has little hindrance.

It may not have begun with Trump, but a transmutation of this sort has certainly “blossomed” under his watch. His thumb has altered the POT matrix into something that is no longer the conservative moral matrix. When he pushes the Authority/subversion button, all other values are marginalized. The party voice might sound the same; the choir might sing long familiar hymns (freedom, independence, patriotism, etc.) but it does so while dismantling its prior core values (and with it, American democracy). The “only I can fix it” former president presides while his minions “fix” democracy to his authoritarian liking. It’s happening now. In state after state, suffrage is being suppressed, past elections are being invalidated, and future elections are being primed for manipulation. If he and his party prevail, democracy won’t. “American democracy,” like “Russian democracy,” will be a misnomer.

The POT threat to democracy is coming from the right. Could it just as easily have come from the left? It’s another partisan sounding question, but an almost automatic follow-on to the first.

Does its anchor in Care/harm protect liberal ambition from authoritarian intrusion and manipulation? Might an “only I can fix it” liberal arise to such prominence that Care/harm values could be abandoned in pursuit of another supposed need? Or could the Care/harm value be so threatened that only the power of a demagogue could save it?

Demagogues and authoritarians usually arise through promises to address the fears/concerns of one part of a population over another. Demagogues are willing to inflict pain and suffering on one group in order to cement support from another. It’s hard to imagine a would-be leader infused with Care/harm values seeking power in such manner. It’s equally hard to imagine a Care/harm constituency that would be taken in by such tactics. But, “hard to imagine” doesn’t mean impossible. Twenty years ago, could one have reasonably imagined a proud GOP’s devolution into the POT? Could one have imagined “strong” and outspoken GOP leaders like McConnell, McCarthy, Pence, Graham, Cruz, Meadows, Jordan, and too many others so weakly offering themselves up to a wuss-demanding figure like Trump? Could one have imagined a GOP constituency willing to follow and support such sheepish leaders?

But there’s no point right now in imagining which party or matrix might be most susceptible to decay or manipulation. One has already disintegrated; the GOP is gone. There’s no conservative moral matrix holding party left on the field. There’s only the POT and an authoritarian leader in its place. Its moral matrix is whatever its leader wishes it to be. His supplicants have assumed the position: They are letting him do it. They are letting him do anything.

Not everyone; they didn’t all bend over. There still are individuals with a balanced conservative moral matrix base. They still do have some grounding in its Care/harm component. While the POT easily presides, perhaps as many as 34% of the former GOP would rather that it didn’t. It’s a minority, but a significant minority. It’s one that can’t control the POT’s direction, but it can determine its fate. Trump is taking the country down the road to authoritarianism. Today, the easy way there is through the ballot. Tomorrow, the only way back will be through blood, the blood of our children. The POT will let him do it; they will let him do anything. But it will take more than just that. He needs all of what used to be the GOP. He needs the acquiescence of its 34% to succeed.

So, it’s a question for the 34%, the one that must be answered: Will you let him do it?

The post The 34% Question first appeared on Dissident Voice.

This content originally appeared on Dissident Voice and was authored by Vern Loomis.