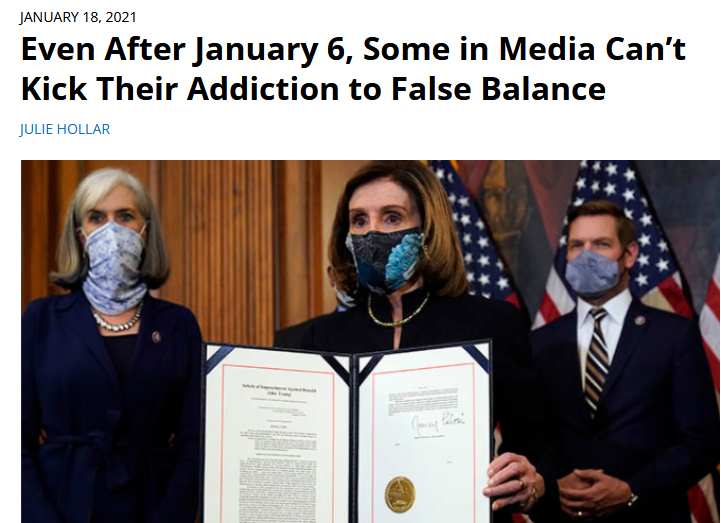 In the wake of the Capitol Hill insurrection, FAIR  (1/18/21) noted “a new and refreshing ability to apply accurate labels to people and their behaviors…and to apportion blame based on reality, not a wished-for fantasy of balance.”

After January 6, we noted (FAIR.org, 1/18/21) that many in corporate media finally found the courage to cast aside their commitment to false equivalence. Presumably shocked by what they had witnessed, reporters began using words like “sedition” and “incitement” without having to put them in the mouth of a source who could then be balanced by an opposing view. News outlets directly stated that Donald Trump “set in motion” (New York Times, 1/6/21) or was responsible for “inciting” (CNN.com, 1/12/21) the deadly attack on democracy.

Yet we also noted that Trump’s lack of support at the time from within the establishment, Republicans and Democrats alike, made that honesty easier for reporters—some of whom nevertheless couldn’t shake their old habits as a debate began over whether Trump should be impeached yet again for inciting the insurrection.

Six months later, Trump has solidified his grip on the right, and elite journalists have largely returned to their perfunctory both-sides reporting. 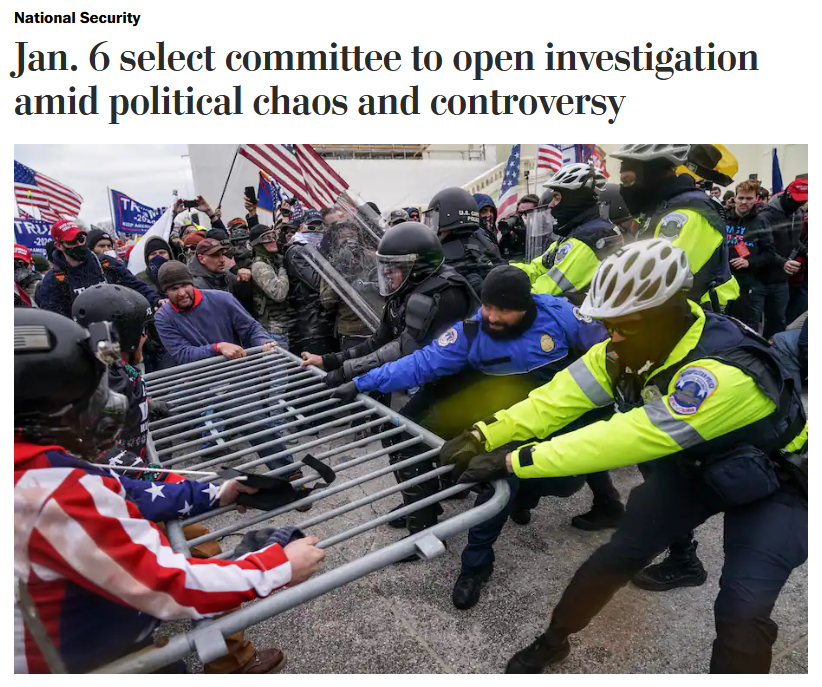 Because Republicans refused to participate in the January 6 hearings unless pro-insurrection members could be on the panel, the Washington Post (7/25/21) declared that “a cloud of controversy…threatens to compromise the investigation from the outset.”

On Tuesday, the Select Committee to Investigate the January 6 Attack on the United States Capitol began its inquiry into the right-wing insurrection. But investigations can lead to calls for accountability, so the Trumpist right, which has doubled down on its own innocence and its election fraud lie, is doing everything in its power to thwart it.

What “battle” prompted such “political chaos”? House Democratic leader Nancy Pelosi rejected two of the five Republican nominees to the committee: Jim Banks and Jim Jordan, both of whom had been vocal supporters of efforts to undermine the election and had condemned the inquiry itself, and whose nominations were clearly intended to subvert the committee’s work. (Banks had declared that the committee was created “solely to malign conservatives and to justify the left’s authoritarian agenda.”) Republican minority leader Kevin McCarthy then announced a GOP boycott of the committee. Rather than report this obvious stunt for what it was, journalists happily played up the right’s fake shock and outrage.

Pelosi “stunned the GOP” with the move, reported an embarrassingly credulous Politico piece (7/21/21). “Both parties have attacked the other as insincere and uninterested in conducting a fair-minded examination,” mused a Washington Post report (7/21/21). “Nancy Pelosi just doomed the already tiny chances of the 1/6 committee actually mattering,” lamented CNN‘s Chris Cillizza (7/21/21).

‘Two ways of viewing the world’

It’s not just Washington politics. The right’s strategy across the board depends on falsehood and bad faith, but too many reporters refuse to acknowledge that. 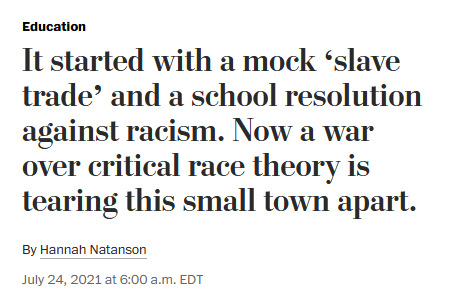 The Washington Post‘s report (7/24/21) on racist incidents at a Michigan school highlighted “white parents’ growing conviction that their children are being taught to feel ashamed of their whiteness — and their country.”

The Washington Post (7/24/21) recently published a report about “a war over critical race theory” in Traverse City, Michigan. In April, a group of local white students “held a mock slave auction” on Snapchat in which they “traded” their Black peers for money. Also featured in the Snapchat: messages such as “all Blacks should die” and “let’s start another Holocaust.”

This prompted the school system in the overwhelmingly white town to fast-track an equity resolution to condemn and address racism. The Post‘s Hannah Natanson explained:

But what happened over the next two months revealed how a town grappling with an undeniable incident of racism can serve as fertile ground for the ongoing national war over whether racism is embedded in American society.

So the paper will admit that the isolated incident was undeniably racist—but not that racism is undeniably embedded in American society. Not coincidentally, that’s exactly the right’s position as well, as it attempts to steer scrutiny away from institutional racism and blame only a few “bad apples.”

Events in Traverse City would demonstrate how quickly efforts to address historic disparities or present-day racial harassment in schools can become fodder for a campaign against critical race theory, fueled by white parents’ growing conviction that their children are being taught to feel ashamed of their whiteness—and their country.

Note the framing: Efforts to address racism “can become fodder for” the anti-anti-racism  campaign (which echoes the depiction of Pelosi rejecting bad faith Republican nominees as “a gift” to Republicans contesting the inquiry). And it’s fueled by white parents’ “growing conviction”—why is that conviction growing? Most importantly, who is responsible for its growth?

While the paper gave space to BIPOC students in the town who had experienced racism, and white students who spoke out in support of the equity resolution, it balanced those views with white adults insisting against all evidence that the town “was never racist.”

“At base, the conflict roiling Traverse City stems from two ways of viewing the world, and the town,” concluded the Post.

If a town were being flooded by rain, and some residents insisted that it couldn’t be raining because there have never been any clouds in the sky, would journalists call that a war over whether clouds existed? Would they claim that the conflict stemmed from two ways of viewing the sky, and publish quotes from both sides? 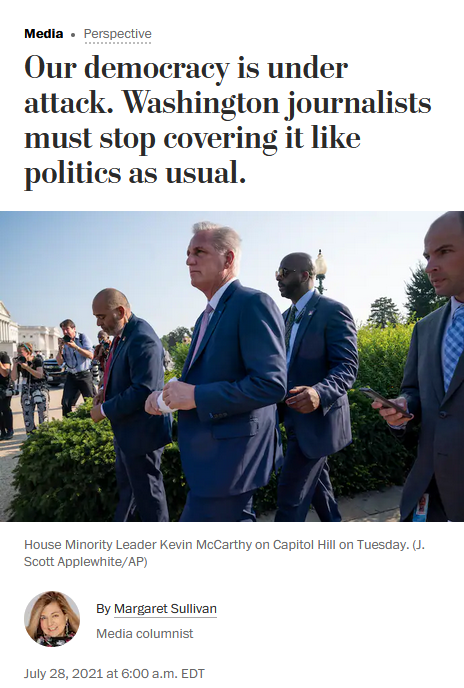 In each instance, both-sidesing journalists bestowed unearned legitimacy on the side of the right. “They want to defend themselves against charges of bias,” observed Post media columnist Margaret Sullivan (7/28/21). “So they equalize the unequal.”

Sullivan calls for news leadership to “radically reframe the mission of its Washington coverage”:

Toss out the insidious “inside-politics” frame and replace it with a “pro-democracy” frame.

Stop asking who the winners and losers were in the latest skirmish. Start asking who is serving the democracy and who is undermining it.

To ask who is serving democracy and who is undermining it, of course, requires more than just committing to truth over claims to impartiality or “objectivity.” It would mean explicitly acknowledging right-wing lies and gaslighting—something news leaders are loath to do, imagining that their centrist ideology is bias-free (FAIR.org, 11/22/19).

The threat to US democracy did not begin with Trump, nor will it end with him. Decades of bipartisan neoliberalism have brought economic inequality to new heights (Extra!, 11/13), increasing political polarization and eroding trust in democracy. To ask who is undermining democracy requires pointing fingers not just at Republicans or racists, but also at corporate influence—of which corporate media are part and parcel.

The post Both-Sidesing Democracy to Death appeared first on FAIR.