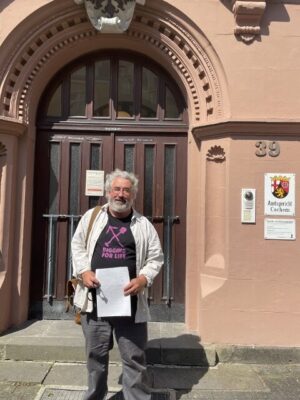 On July 21, I was walking in the forests surrounding the German Air Force Base at Büchel in the Eifel Mountains with three Catholic Worker friends, Susan van der Hijden of Amsterdam, Netherlands, Susan Crane of Redwood City, California, and Christiane Danowski of Dortmund, Germany. We were there at the end of an “International Week” of protests against the approximately 20 US nuclear gravity bombs known as B61s kept at the base in a “nuclear sharing” agreement with the United States.

In previous days we had visited the entrance gates to the base with our signs and banners and two days before we participated in a “Digging for Life” action outside the fences, near the other end of the runway, where the German pilots liftoff and land their Italian made PA200 Tornado jet fighters, daily training to drop US nuclear bombs on Russia when the order is given. This day we hiked to the other, less accessible, end of the runway, through a forest of dead and dying trees decimated by recent years of drought, unprecedented heat and a massive bark beetle infestation affected by climate change.
In the clearing near where the runway begins, we noticed a couple of “spotters,” hobbyists who got there before us looking to get dramatic photos of the jets taking off. In their company, while we were scouting and imagining potential future protests at the site, we also knew that some action was imminent.

Beyond the fence that marked the boundary of the base from the forest, there was a high berm of earth that shielded the nearby Tornados warming up their engines for takeoff from our view. We could not see, but we heard the purr of their engines turn to a roar and we felt the earth shake and we saw and then smelled a wall- acrid and black, a stinking miasma of burnt and unburned jet fuel- rising above the berm and over our heads before the jets screamed off away from us to take to the air to rehearse for the end of everything.

Not far from where these Tornado jets were spewing out more than 13 tons of CO2 per flight hour into the atmosphere, cities and towns in the river valleys were cleaning up from recent rains and floods that left more than 177 dead and hundreds more still missing at the time- in some places the rivers rose to the highest in over 100 years, possibly higher than any seen in the last 1,000 years.

Participation in the annual “International Week” in the COVID pandemic was already hampered by the fact that it was held just days after Germany opened its borders to vaccinated visitors from places like the US, and by July 15, the day after my own arrival by air, many railroads and highways were closed by rising water. We heard harrowing travel stories from those few who were able to join us from various points in Germany. Our numbers were much less than expected and the catastrophe of the floods called us to reassess our plans for the week.

We had planned to have enough people to nonviolently blockade the various gates of the base on Friday July 16th, marking the 76th anniversary of the first atomic bomb detonation at Alamogordo, New Mexico in 1945, and the 42nd anniversary of the 1979 uranium mine waste spill at Church Rock, New Mexico — the largest accidental release of radioactive materials in US history. We recognized that even with our reduced numbers, such an act of civil resistance would distract police from search and rescue work that many of them were doing in flooded places in the region. Members of our group met with local police and the commander of the base to inform them that instead of a blockade there would be a simple quiet vigil with signs and prayers outside the main gate on July 16, the planned “Digging for Life” action scheduled for three days later would go on.

The original concept of the event was to be a symbolic piece of theater around the base’s new highly armed security fence with surveillance cameras, motion sensors and a deep concrete foundation. The plan that some of us would dig with pink shovels with the impossible aim of making a tunnel under the fortification and get onto and close the runway while others would cheer them on from a picnic in the adjoining meadow, had to be adapted to our reduced numbers and in recognition of the devastation that had been unfolding around us in the preceding days.

The vibrant pink shovels were muted with black paint or tied with black ribbons. Banners with more light hearted messages written in pastels were left behind and new ones made more in keeping with the moment, in German, white on black, “STOP THE NEXT CATASTROPHE BEFORE IT BEGINS- ABOLISH NUCLEAR WEAPONS!”

As the event unfolded, 14 activists from Germany, the US and the Netherlands were met at the fence by several times that number of civilian and military police, who after an hour arrested four of the most persistent diggers who were soon released without any charges. While especially in light of the $14 million plus spent on the new fence meant to keep people like us out, the civilian police had better things to do and could easily have ignored our clearly symbolic effort, some in the local press and more in social media blamed us for distracting the police and military from dealing with the aftermath of the floods.

In the midst of their national disaster, only about 1,000 of the 150,000 soldiers in the German military were employed in flood relief and on the day we were digging for life at Büchel, Tornado jets were crisscrossing over our heads, causing police, protesters, soldiers and members of the press alike to cover our ears from their deafening roar, illustrating what is often ignored and never mentioned in climate negotiations, the huge part that the militaries of the world play in the climate crisis, the US and its allies more than the rest.

Before the digging began at the fence and under the screaming jets, a police detective called my name and with some ceremony served me with papers from the court informing me that I had been accused, convicted and sentenced to a 900 euro fine or 30 days in prison in response to my actions on my last visit to Germany and to Büchel, two years ago, along with two others, Susan from California and Susan from Amsterdam. It was decided by the court that “through the same act and acting collectively” and “within the scope of the annual meeting and demonstration against nuclear weapons at the airbase of fighter-bomber squadron 33,” I had “gained unlawful access to the military area and its security sector” by cutting holes in the fence. I remember that the military police sergeant who apprehended us was unreasonably upset about the hole we had made, not so much concerned about the weapons of mass destruction that he was guarding nor the violations of the German Constitution and the Nuclear Nonproliferation Treaty that they pose. Before leaving Germany, I filed an appeal of my conviction and sentence in the court at Cochem and I hope for the opportunity to argue against the assumed legality of nuclear weapons in a German court.

The United States is preparing to upgrade its current B61 nuclear bombs with the new B61-12, reportedly costing over $20 million each and the German government is looking to soon replace its fleet of Tornados with more sophisticated fighter bombers, both governments spending billions on systems that will significantly lower the threshold of nuclear war and contribute to global warming. There is no solution to the climate crisis and no hope for human life on this planet that does not include disarmament and an end to war.