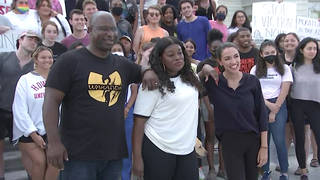 The Biden administration has issued a new two-month moratorium on evictions, covering much of the country, after facing public pressure from progressive lawmakers led by Congressmember Cori Bush of Missouri, who was once unhoused herself and slept on the steps of the U.S. Capitol in protest after the moratorium on evictions lapsed on July 31. The new moratorium issued by the Centers for Disease Control and Prevention will cover areas of the United States where there is “substantial” or “high” spread of the coronavirus. The belated renewal of the eviction moratorium shows that “people need to be willing to criticize this administration,” says Jacobin staff writer Branko Marcetic. “People want the administration to succeed, but treating them with kid gloves is not necessarily going to be the best way to get these kinds of progressive and just outcomes in policy.”