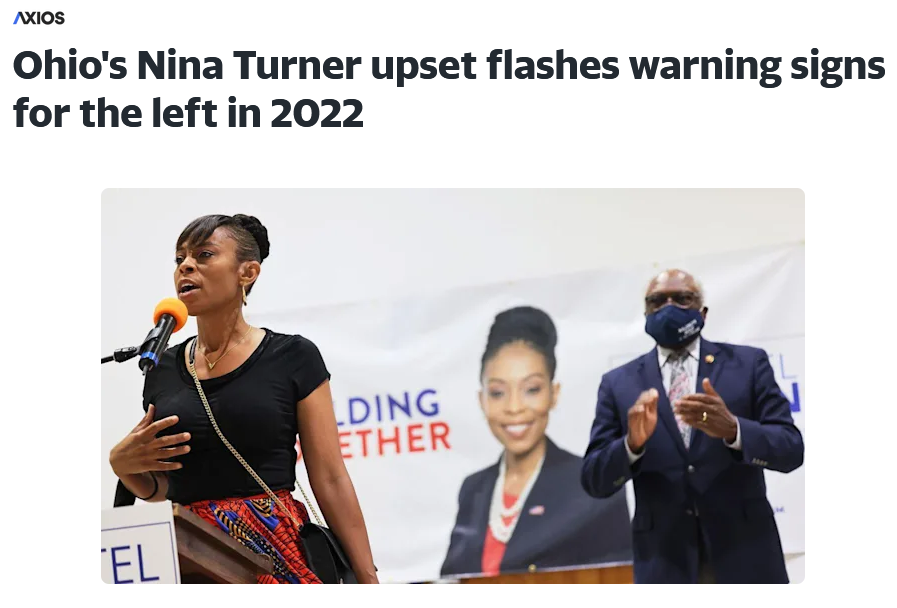 Axios‘ Mike Allen (8/4/21): “An upset in Ohio on Tuesday night is giving moderate, Biden-aligned Democrats momentum vs. the party’s vocal left ahead of next year’s midterms.”

On CNN (8/4/21), a panel discussion of the race came to an easy consensus. Former Biden campaign operative Ashley Allison offered the first assessment, that Turner’s “progressive agenda just didn’t seem to resonate with voters.” When CNN host Pamela Brown then asked conservative pundit Mona Charen if this was true of “that district” or a “broader” phenomenon, Charen declared that it was “broader,” because the battle “is about ideology” and “the moderates have been winning”—as if election outcomes always reflect the policy preferences of voters.

At Axios (8/4/21), a short bulleted summary of the race outcome proclaimed that “it matters” because “Brown, far behind Turner in polls and money, stayed positive and tied her fate to President Biden.” Axios co-founder Mike Allen then offered the only quote in the piece, from the right-wing Democrat think tank Third Way: “Once again, the pundits and the Twitterverse got it wrong, and Democratic voters picked the moderate…over the candidate ordained by the far left.”

The implication, of course, is that Democratic voters prefer “moderate” policies like the ones Third Way supports. (Third Way also shoveled half a million dollars to ads attacking Turner, something Axios failed to note.)

At the Guardian (8/3/21), Brown’s victory “will be interpreted by moderates as proof that the party should hold the center ground and not shift to the left.” Rather than offer any other possible interpretation, the paper instead offered the same Third Way quote.

There is no denying that the Ohio race was a loss for the progressive wing of the party. The lessons to be learned from that loss, however, are much less clear. Both candidates had active support from their respective wings of the party; Turner’s campaign did raise more money, as Axios and many others pointed out. What a number of them didn’t note, on the other hand, was the flood of PAC money directed against Turner in the later stages of the race, funding a barrage of attack ads (that most certainly did not “stay positive”). Turner blamed her loss on this “evil money.” 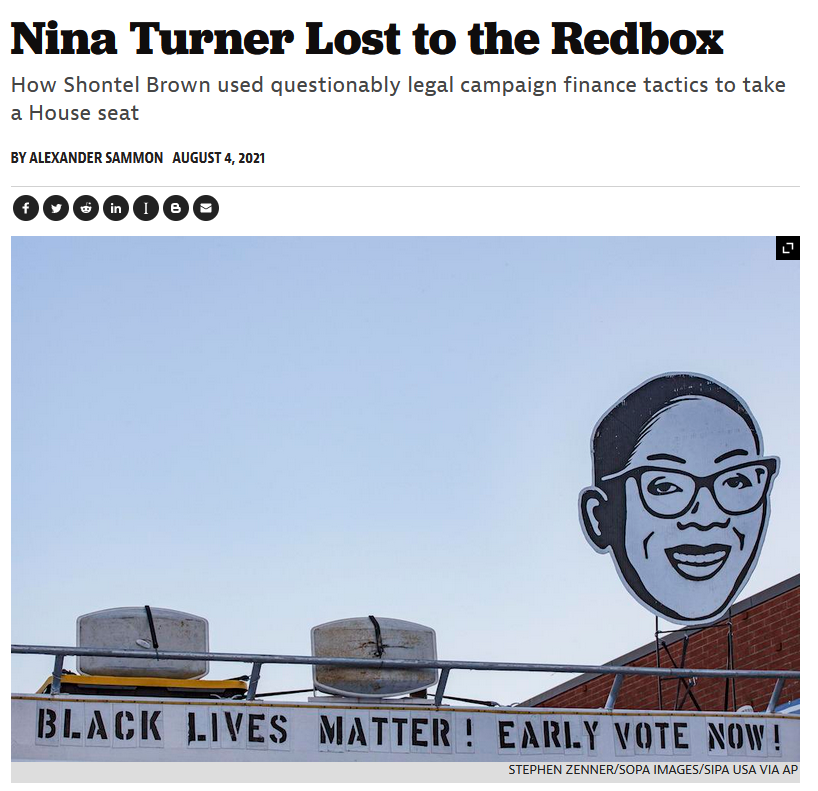 “Redboxing” is a tactic by which campaigns, forbidden by law from coordinating with PACs, nevertheless provide explicit instructions on the messages they’d like PACs to fund (American Prospect, 8/4/21).

As the Intercept (5/8/21) reported back in May, the Brown campaign pushed the legal limits of campaign finance law by using its website to blatantly coordinate messaging with a pro-Israel super PAC, which ultimately poured $2 million into a flurry of attack ads against Turner (American Prospect, 8/4/21). The negative campaign included mailers that falsely suggested Turner was opposed to universal healthcare and raising the minimum wage. The Intercept (7/27/21) also reported on FEC filings showing that big GOP donors flocked to Brown.

Corporate media had little interest in these aspects of Brown’s victory. The Guardian had it that the race “had turned increasingly nasty in recent weeks, with money pouring in from outside groups and both candidates under attack from negative TV ads.”

On a CNN show (8/4/21) that featured Brown as a guest, host Erin Burnett played a clip of Turner’s concession speech (“We didn’t lose this race! Evil money manipulated and maligned in this election”). Rather than ask Brown about the PAC ads that attacked Turner on her behalf, Burnett offered this:

If Burnett meant to suggest that outside groups raised more money for Turner than for Brown, that’s false—PACs spent $1.8 million more on Brown’s side than on Turner’s, with three-fourths of that invested in negative campaigning.

Stop ‘caving to the left’ 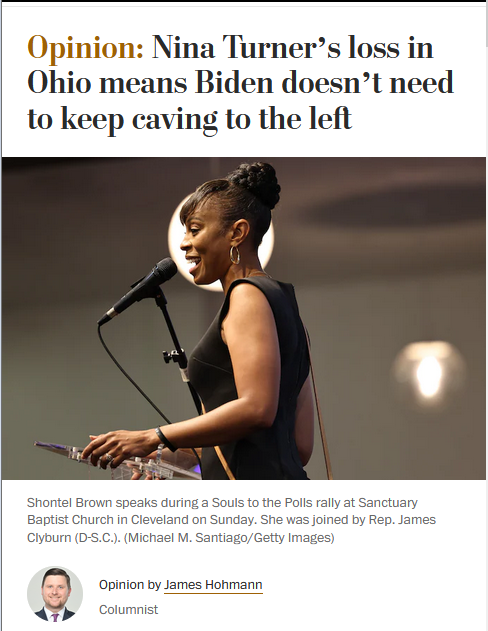 Washington Post‘s James Hohmann (8/4/21): “In the latest proxy war for the soul of the party, the pragmatists again beat the ideologues.”

Under the headline “Nina Turner’s Loss in Ohio Means Biden Doesn’t Need to Keep Caving to the Left,” Washington Post columnist James Hohmann (8/4/21) likewise emphasized that Turner “outraised Brown $5.6 million to $2.4 million,” with no mention of the PAC money.

Hohmann admitted that “a single special election shouldn’t be over-interpreted”—and proceeded to over-interpret with abandon. The results of the election, he argued, “show the leader of the Democratic Party is not Sanders or AOC. It’s Biden. And he should start acting like it.”

Hohmann took Brown’s victory as a referendum on Democratic policy positions, concluding that “Brown prevailed by embracing President Biden—and celebrating his brand of incrementalism.” He described the response to her victory speech:

The crowd of grassroots activists cheered the mention of compromise. Democrats who might be tempted to torpedo a scaled-back infrastructure package, on the grounds that it’s not sweeping enough, should listen.

That he slipped “grassroots” in there was surely no coincidence, papering over the very un-grassroots super PAC support that helped lift Brown’s campaign. But it’s noteworthy that Hohmann tied Brown’s victory to concrete policies like infrastructure. Given that a recent poll found 85% Democratic voter support for the package progressive Dems are insisting on as a complement to the infrastructure bill, it’s hard to imagine even Brown’s supporters would cheer for Hohmann’s sort of compromise.

He also pointed to progressive Rep. Cori Bush, whose high-profile lobbying, including sleeping on the steps of the Capitol, helped push the Biden administration to extend the nation’s eviction moratorium. Rather than applaud this effort to keep up to 6 million households from losing their homes while federal aid is still slowly being disbursed, Hohmann deplored it as “legally dubious,” and further evidence that Biden feels “beholden” to the left of his party.

Popular with voters, not media 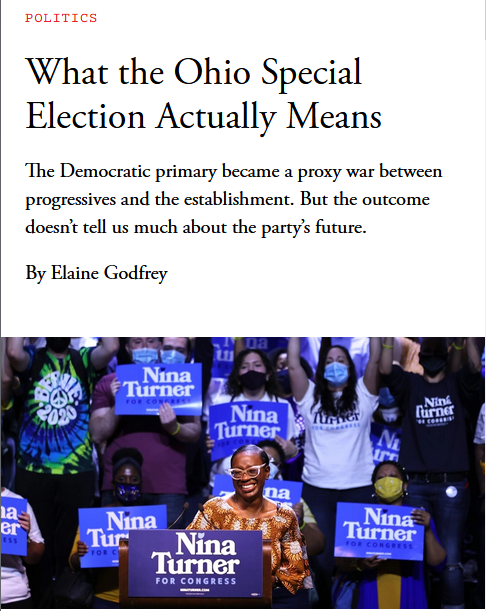 Atlantic‘s Elaine Godfrey (8/3/21): “Experts warn against overinterpreting results to suggest that all progressives will be doomed in the Biden era, or that centrists will always win the day.”

In a much more clear-eyed piece for the Atlantic (8/3/21), Elaine Godfrey pointed out that experts know special elections are unique one-offs, offering essentially nothing in the way of broader political lessons to be learned. But that didn’t stop reporters from making a big deal out of this one:

One reason political reporters up and down the Eastern Seaboard paid such close attention to a special election in Ohio is that there aren’t many other races going on: Only a few elections are scheduled this summer. And reporters, like this one, have editors to appease.

Politico (8/3/21), toward the end of its post-mortem, made an important acknowledgment:

It’s worth noting the moderate attacks against Turner did not take aim at the progressive proposals she supports, such as Medicare for All or a Green New Deal—an indication they are popular with the base.

But such policies are decidedly unpopular with corporate media (FAIR.org, 4/20/19, 9/6/19), where post-election analyses are often happy to play along with the fiction that elections in the United States are unmediated reflections of the public’s policy preferences.

The post To the Right, to the Right: Media’s Special Election Lesson appeared first on FAIR.