Janine Jackson: In March of 2021, conservative activist and Manhattan Institute fellow Christopher Rufo openly declared the intention of the campaign to vilify any questioning of enduring racial inequities: “The goal is to have the public read something crazy in the newspaper and immediately think ‘critical race theory,’” Rufo wrote. He bragged that he had “successfully frozen” the “brand” of critical race theory, and was “steadily driving up negative perceptions. We will eventually turn it toxic as we put all of the various cultural insanities under that brand category.”

In that remarkable statement about what people might read, “newspaper” is not a metaphor; media are the vehicle for this anti-antiracism campaign, which has achieved devastating traction in a country in which overwhelming majorities—76%, in a recent poll—acknowledge racial and ethnic discrimination as a “big,” not a past or historic, but a “big” problem.

Luke Harris is deputy director at the African American Policy Forum, a group he co-founded with professor Kimberlé Crenshaw, and where I am a board member. Welcome back to CounterSpin, Luke Harris.

JJ: I’m a media critic because I think it’s legitimate to look at the world the way that it’s presented to people. So if we’re talking about “what you’ve heard” about critical race theory, what—and, more essentially, who—is at the center of this story that folks may have heard? What should we know about the forces at work here?

LH: You know, it’s like the world is turned upside down. The way I look at it, the far-right has moved to the center of the Republican Party, and this attack is a well-coordinated response to the most recent racial reckoning.

What’s going on? If I look at it historically, well, we’re a democratic republic born in the midst of the genocidal experience of Native Americans, of slavery, of apartheid, and exclusionary immigration laws that, for example, seriously restricted the entry of Asian Americans into this country until late in the 20th century.

But we’ve never really confronted the implications of that history. For the most part, we’ve not confronted that history at all. And, nonetheless, it is in this setting that the right has created a political and moral panic. They are pushing back against the possibilities of progressive social change across the board. The attack on CRT is just the tip of the iceberg.

What’s it about? I think, really, it’s about galvanizing support for the Republican Party in the 2022 and 2024 elections. Nowadays, the right is concerned that racial justice advocates have created a powerful multiracial movement in response to the 2020 killings of George Floyd, Breonna Taylor, Ahmaud Arbery and other victims of anti-Black violence at the hands of the police. And they want to, as best they can, quell that moment.

So their campaign is basically an effort to create a critical race theory bogeyman, as you suggest, and pour everything into that category that they believe will prompt fear, discomfort and pushback, on the part of parents and voters, who are primed to respond to the hysteria that they’re trying to create. They want to use this tactic, I think, to drive people to the ballot box, and to ultimately control, down the road, local school boards, Congress, and return to the office of the president.

JJ: When CounterSpin spoke with Kimberlé Crenshaw, in December of 2020, Trump had issued this executive order outlawing critical race theory and any kind of mention of white supremacy. And people thought it was rhetoric; I was one of them. I thought that this would be kind of washed away. We suspected Biden would be elected, and that executive order would be rescinded—and it was. And yet, somehow, that still didn’t matter.

And now, many of the things, you know, measures that are going forward in school boards, they won’t go through—a lot of them violate the First Amendment, minimally—they won’t be passed. And yet, that may not matter; it can still have an effect. And we know that from history, right? Laws don’t have to pass to have an impact. 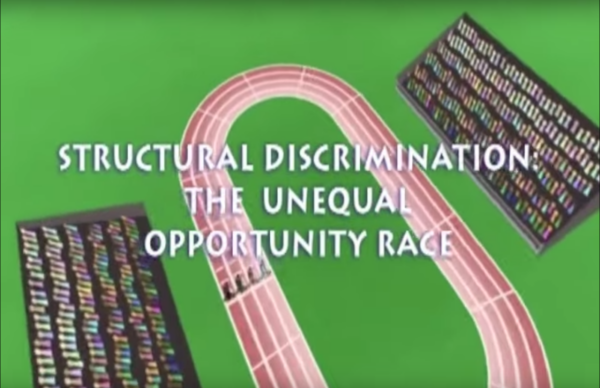 LH: Yeah, we sure do know that from history. What may not become official law may alter the political universe such that, in terms of the elections in 2022, the elections in 2024, the Republicans achieve what they want. You know, this is a long-term campaign. We’re looking at this 40 years into the process of them moving the nation in a direction such that these kinds of considerations seem reasonable.

You probably recall, Janine, several years ago, the African American Policy Forum’s Unequal Opportunity Race—which is just a four-minute video that has runners running around a track, and it reveals some of the obstacles that people of color (men and women), face that their white counterparts don’t. And we introduced genocide, slavery, apartheid, school segregation—it was just a basic teaching video, and we had used that video, really, globally; it had been seen by millions of people.

But it wasn’t until just a few years ago that that video was shown at a Black History Month performance in, I think it was, Henrico, Virginia, and that was considered to be a hate video. Race, and the obstacles that it presented, was banned at that school, and we had to push back so that those schools could show those kinds of things.

And so, building on that kind of ideological aggression, Trump moved in the direction that he was moving at the federal level. But this has been going on, these kinds of ideas have been pushed by the Manhattan Institute, the Heritage Foundation, conservative think tanks. And then with the spread of Tucker Carlson and Fox News, and Christopher Rufo, now at least 26 states have introduced bills or taken other actions to ban or limit CRT discussions. And you’re right: They may not win in all these cases, but they may win the school board elections.

And in these kinds of situations, the people that they want to put in are people who really want to deny American history, insofar as it relates to systemic forms of discrimination. And again, they’re targeting critical race theory, but when you dig deeper into these bans, they’re going after gender discrimination, they’re going after discrimination that relates to trans people. Some of these bans suggest that you can’t use the words “social justice,” in pursuit of an understanding of what it means to try to dismantle some of the institutional obstacles that have been put in place that various Americans face.

And so that’s what we’re up against. And it’s kind of like, from the right’s perspective, rolling a ball down a hill, because they’re talking to people that know little or nothing about even the communities that they live in.

JJ: That leads me to my final question, which is: I think a lot of folks, like me, think, “Well, they’re just talking to people who already are racist, who are already anti-education about the history of this country.” But that encourages a passivity on the part of folks who want to resist that.

And we can’t just think, “Oh, that’s so patently, transparently problematic that surely it won’t go forward.” It already has gone forward. 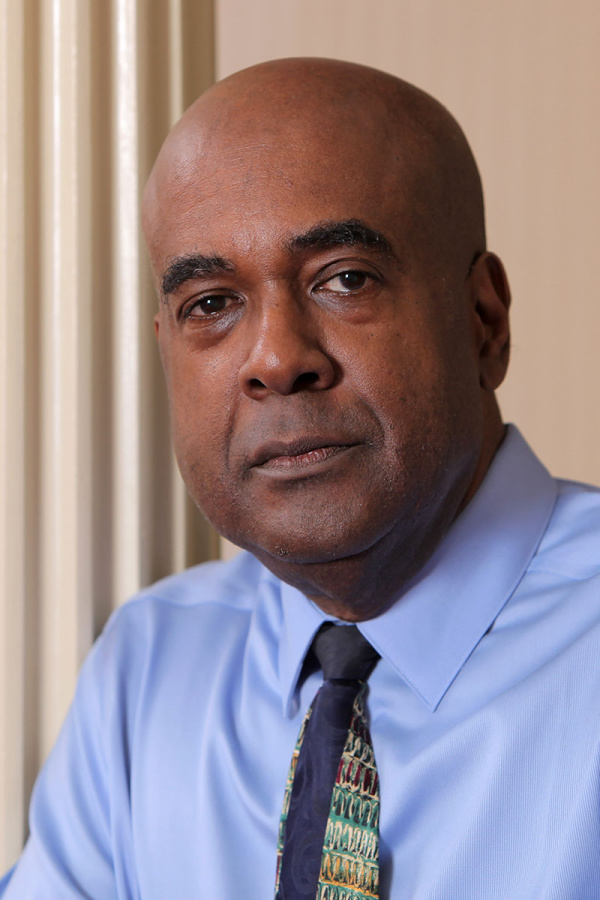 Luke Harris: CRT is “just a pathway to unearthing the ways in which our society has structured racial inequality into its everyday institutions, practices and policy priorities.” (photo: Vasser)

LH: Critical race theory, the ideas that are at the center of it, traveled worldwide as tools for analysis with respect to racial, gender and other social justice concerns. Although it originated as a field within the context of the legal academy, it provides and serves a shared objective for professionals across a variety of institutional spaces. Critical race theorists strive to educate Americans about what it means to eliminate systemic racism and sexism—and that’s just where we start.

And there are a lot of Americans that are involved in this, from elementary and secondary school teachers, to diversity, equity and inclusion advocates, to racial justice and democracy activists. So what’s that about? What’s it mean to push back against this?

To make a long story short, critical race theory—it’s a field of study that asks why we have clearly visible and durable forms of racial inequality, centuries after emancipation and decades after the adoption of ideas about color blindness and formal equality. So in this respect, CRT, to be sure, it has nothing to do with what the right-wing disinformation campaign says it’s all about. Really, it’s just a  pathway to unearthing the ways in which our society has structured racial inequality into its everyday institutions, practices and policy priorities.

What do I mean by this? Take, for example, the public policies that emerged in the New Deal, in the Roosevelt administration; take the Federal Housing Administration and take the GI Bill.  The Federal Housing Administration, now, the thing about it: They contributed $120 billion in resources so that people could get mortgages who couldn’t get them before. And that wasn’t just a group of people that included people of color; the ordinary white person, until this period in time, couldn’t afford to buy a house, right?

But that $120 billion, only 2% of that went to all people of color. That money went to the creation of the white suburbs, at a time when people of color were moved into rental properties in what would become urban poor communities.

The most significant element of the wealth gap between Black people and white people is a function of those kinds of policies. So to understand the present, you have to understand the past. And that’s exactly what the conservatives and the right wing don’t want.

So what does this tell us? That the truth is, no matter who we are, we’re going to solve problems. The only way we can do that is to be honest about the sources of those problems.

That said, I think that it’s perfectly appropriate to have conversations about systemic racism. That makes sense, not just for white children, but for children of color.

Look, I was born in the middle of the 20th century, 1950. I was born when apartheid was still legal in many parts of the country, and de facto apartheid existed where I lived.

Now, I didn’t live in the Deep South; I lived in South Jersey. But the neighborhood that I lived in, the schools that I went to, and the workplaces that my parents had access to, were all subject to the effects of de facto and de jure apartheid in the United States.

So where does this leave us? The bottom line is, we can’t fight for racial justice if we can’t see, speak and learn about racial injustice. We have to recognize that teaching about the contradictions in American history, that it sharpens young minds and enhances critical thinking. In effect, teaching about systemic racism and sexism provides a bridge to unite us all, because it’s a pathway for all of us to be treated more fairly.

JJ: Absolutely. Well, thank you very much, Luke Harris. Again, that’s AAPF.org. Luke Harris, thank you so much for joining us this week on CounterSpin.

The post ‘We Can’t Fight for Racial Justice if We Can’t Learn About Racial Injustice’ appeared first on FAIR.