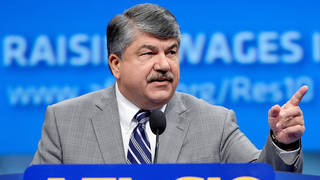 Richard Trumka, the longtime president of the AFL-CIO and one of the most powerful labor leaders in the United States, has died of a heart attack at the age of 72. Trumka’s death has prompted an outpouring of tributes from fellow labor figures, activists and lawmakers, including President Joe Biden. Trumka was a third-generation coal miner from Pennsylvania who, at the age of 33, became the youngest president of the United Mine Workers of America. He continued climbing through the ranks of organized labor for the rest of his life, fighting campaigns against apartheid in South Africa, racism within the labor movement and anti-union rules across the United States. He was elected president of the AFL-CIO, the country’s largest labor federation, in 2009. “We were broken by the news,” says Arlene Holt Baker, former executive vice president for the AFL-CIO and friend of Trumka’s. “He’s the brother in our movement who fought in so many ways for what was right.” We also speak with veteran labor organizer José La Luz, who says Trumka’s main challenge was fighting the erosion of worker power. “What we have witnessed in the past few decades is a massive distribution of wealth from the bottom to the top,” says La Luz. “This remains a fundamental challenge for whoever is going to take up the mantle.”