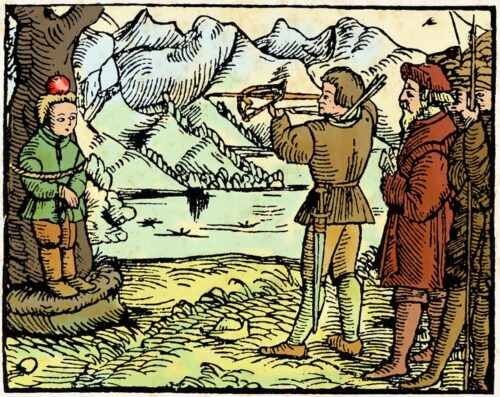 William Tell with a crossbow, is forced to hit the apple placed on top of his son’s head, according to the legend, on November 18, 1307. Colored woodcut, XVI century. Source: (Photo by Fototeca Gilardi/Getty Images)

The legend has it that Switzerland was celebrating her 730th Anniversary on 1 August 2021.  That’s the legend about the creation of an independent, neutral and sovereign nation. It’s a legend that has taken hold in every Swiss citizen’s heart and mind. It’s a legend that has made Switzerland around the world what it still is in reputation and sometimes even in appearance: a neutral, ethical country in the heart of Europe.

When we look closer, this legend was largely born from the pen of a German author who had never set foot in Switzerland. When Friedrich Schiller wrote the play “Willhelm Tell” in 1804, the basis for the heroic, unique and neutral Switzerland, he had never visited Switzerland. However, the legend has become reality, even though it was born 513 years after the alleged event took place.

This little detail is unimportant. What counts is the background to the story, namely that the territory that gradually became Switzerland was originally inhabited by the Helvetians, or Helvetic Celts. As was much of Europe, they were largely dominated by the Habsburg Dynasty until the early 19th Century.

However, the Helvetians rebelled on or around the late 13th Century when, according to the Friedrich Schiller legend, called “Wilhelm Tell” – name of one of the legend’s principal liberating heroes – the Governors of the three original cantons, Uri, Schwyz and Unterwalden, got together on a mountain called Rütli, facing the Lake of Lucerne.

With an oath, a promise to God, the three governors united their lands in an act to defend themselves sovereignly against any aggressor, meaning, in particular, the rulers of the Habsburg Empire. According to the legend this happened on 1 August 1291 – 730 years ago. Thus, was the Confederatio Hevetica (Swiss Confederation) born.  This is what the Oath said, roughly translated:

We want to be a single People of brethren,
Never to part in danger nor distress.
We want to be free, as our fathers were,
And rather die than live in slavery.
We want to trust in the one highest God
And never be afraid of human power.

From that date forward the alliance of cantons against the Habsburg dynasty grew, though only in 1848, when a new Constitution was adopted, was the present federal republic formed. Today The Swiss Confederation, or the modern Switzerland, consists of 26 fairly autonomous cantons.

Having been oppressed for centuries as Helvetians, the new Switzerland pledged to become a neutral Confederation. This noble principle of neutrality was also enshrined in the Swiss Constitution. Thus, the Friedrich Schiller legend on which much of the origins of the 730 years of Swiss history is based, as well as the belief and pride for the heroic liberation from oppression, is still part of the Swiss characteristic.

By and large, the Friedrich Schiller “Wilhelm Tell” legend – and the noble belief of rebellion for freedom and of a sovereign but federal nation, benefitted many countries with ideas of their own constitutional and geopolitical structure.

Only few, though, have achieved a true federalism, where regions, provinces or districts remained largely autonomous in budget as well as decision- and law-making. Much of the staunch Swiss federalism may be outdated in modern times, as it seems ludicrous that a small nation of only 8.4 million people has 26 different education schemes, and 27 different tax systems, the 27th being the National Federal Tax. Education is in the process of being harmonized; taxes not yet. This is small fry, as compared to geopolitics, practiced then and what it has become today.

Although de facto Switzerland has always taken the side of the West, her constitutional neutrality has and still benefits Switzerland greatly. A truly neutral country would have been free from taking positions for or against Russia, China, Cuba, Venezuela and the list could go on.

A truly neutral country would have been free from taking positions for or against the colonial powers of the past centuries. However, while never a colonial power, Switzerland has often participated, even with soldiers, in colonial wars in favor of European colonialists and has royally benefitted from colonialism.

Throughout their modern history the Swiss usually took the side of the colonizers rather than the colonized. It is true that Switzerland as a nation-state did not engage in imperialism, and conquered no colonial territories. Attempts to found great economic empires like the East India Company failed.

But it was part and parcel of colonialism to believe that the peoples in colonized lands were inferior to white Europeans. And in 19th-century Switzerland this was definitely part of the prevailing framework of assumptions about the world.

Generations of Swiss grew up with tales of “half-witted negroes”, travelers’ accounts of naïve, child-like savages, and advertising where the colonized were at best a decorative backdrop for colonial products. This thinking affects the country even today.

The problem of Switzerland’s historical involvement in colonialism goes beyond controversies about derogatory names or statues. At times the Swiss were actually fighting as soldiers in the colonies.

In 1800, when black slaves in present-day Haiti on the island of Hispaniola, rose in revolt against their French colonial masters, Napoleon sent 600 Swiss troops to fight them. France was able to draw on these mercenaries thanks to an agreement with the Helvetic Republic. This was by no means an exception; even after the modern federal republic was founded in 1848, Swiss defied the law to fight for colonial powers as mercenaries. They could look forward to considerable earnings as long as they didn’t die of tropical diseases.

However, the big money from the colonies did not go to the mercenaries, who mostly came from impoverished families and saw it as a great adventure to enlist in Dutch or French service. Instead, trade was the moneymaker, be it in goods or human beings from the colonies.

One of the worst kinds of Swiss involvement with colonialism was that of the slave trade. Swiss individuals and companies made money out of slavery as investors and traders, organizing slave-hunting expeditions, buying and selling people as slaves, and, as slave owners, running great plantations which they often proudly called “colonies”.

As a result, quite a few famous Swiss names have started to look bad in recent years. The family of Alfred Escher, a major figure in the development of modern Switzerland, came under a cloud when it became known that it had a plantation run with slave labor. In Sacramento, California, demonstrators pulled down a statue of General John Sutter. The Swiss native son, who hailed from the Basel area, at one time ranked as a hero of the Wild West until historians revealed that he had dealt in child slavery.”

Enough. That’s the past. But fast forward.  Is the present so much different?

Take the covid plandemic the entire world – all 193 UN member countries, have been subjugated to this higher order of – let’s call it – a satanic cult. Its aims are multiple. The key and all overarching goal consists of a massive population reduction, a mass-genocide – eugenics at its worst. Another objective is digitization of everything including the human brain, transforming humans into “transhumans”.

Klaus Schwab, founder and CEO for life of the World Economic Forum – WEF, in a 2016 interview with Swiss-French Radio/TV – SRG, divulges the plan to make from surviving humans “transhumans” – see this 2-min. video interview.

Transhumans will react and obey to 5G/6G-powered electromagnetic-directed Artificial Intelligence (AI); and finally, the last but not least of the three key objectives is transferring the assets of which the lower- and middle-class owners and industries were destroyed by the covid plandemic – to an “upper-class”, insanely rich small elite. This is already happening – and, of course, hardly reported in the mainstream media. While poverty has increased exponentially in the Global South, the dozen richest individuals have added hundreds of billions to their fortunes.

The fact that Switzerland hosts not only annually the WEF Davos Forum, a club of corporate and banking billionaires that has gradually taken over the reins of the world, doesn’t bode well with the Swiss neutrality, the Swiss modesty and the Swiss heroic image of defender of sovereign human rights and justice — the substance of the legendary oath of the Ruetli in 1291. The WEF itself is registered as an NGO in a small, lush suburb of Geneva.

Today this NGO is more powerful than the United Nations. It dictates the rules of the game to the UN. Of course, in many subtle ways, for example, by carefully choosing the people who run the UN and its sub-organization like WHO and others – and by letting money flow and talk, where need be. Money is never an issue for the rulers of the universe. And if money fails, there are other, less subtle ways.

Switzerland remains proud host of the WEF despite worldwide protests against the WEF and the WEF’s machinations and plans for a One World Order (OWO). The WEF’s ideology is closer to the Swiss heart – if there is such a thing as a Swiss heart – than pledged Swiss neutrality, as anchored in the Constitution.

Aside from the WEF – which is a clear sign in which direction neutral Switzerland is leaning – Switzerland is also host to the corporate pharma-directed World Health Organization (WHO), as well as GAVI – the Bill Gates created Global Alliance for Vaccines and Immunizations, or short, the Vaccine Alliance. GAVI is physically housed just next door to WHO.

As we know, WHO is calling the controversial and most often contradictory shots on the measures to be imposed by governments with regard to the covid plandemic – and we also know who calls the shots on WHO.

We also know that the WHO recommended mRNA-experimental genetic therapy injections, not vaccines, are causing more deaths than covid does. Here is an insider assessment of WHO and its harmful measures imposed on the world. Dr. Astrid Stueckelberger speaks from the United Nations Plaza in Geneva:

Neutral Switzerland is aligned with pharma-corrupted WHO and GAVI, following the UN-agency’s deadly guidance and dictate. Why?

On yet another score that goes in the direction of global control and population reduction through long-term misery and famine – weaponized man-made weather – what we are experiencing for the last few months almost everywhere on Mother Earth’s “hot spots”, Switzerland appears to be a lead initiator of applied HAARP technologies, as this 5 min video and pertaining text of 4 March 2019 show. See this:

The pretext and official reason, as usual, for weather manipulation is to stem against climate change and fight for greenhouse gas reduction. When the agenda is a different one, as we live through this northern summer, with never-seen-before floods and droughts, with Siberian heat in the plus 40-degrees C, torrential floods in Saudi Arabia, and around the Three Gorges Dam in China; and with the western US and Canada, all the way up to Alaska extremely hot and burning.

Why would neutral Switzerland be a key instigator of geo-engineered weather that destroys vital infrastructure, harvests – and lives?

As if this was not enough, Switzerland subsidizes her mainstream media by – listen to this! – the equivalent of about US$ 1.9 billion per year. That is about US$ 226 million per capita of the 8.4 million Swiss population.

This must be worldwide the highest media subsidy. It assures that the lies and fears the government wants to instill in the population stick, that the media do not transgress and deviate from their role.

Unfortunately, there is little left of legendary heroic, neutral, sovereign human rights defending Confederatio Helvetica of 730 years ago, of the Gruetli Oath – a noble Oath to God to respect life and to fight for equality and liberty.

This content originally appeared on Dissident Voice and was authored by Peter Koenig.