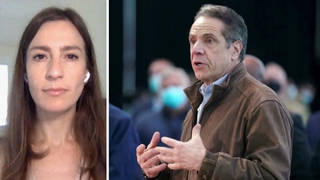 Lawmakers in New York are preparing impeachment proceedings against Democratic Governor Andrew Cuomo after the state attorney general found Cuomo harassed at least 11 women in violation of the law — including unwanted touching and kissing, and inappropriate remarks. Cuomo’s former executive assistant, Brittany Commisso, has filed a criminal complaint against him, and other cases are expected to follow. “The governor is unfit to lead,” says New York state Senator Alessandra Biaggi, who first called on Cuomo to resign in February. She says the damage Cuomo has inflicted goes beyond sexual harassment and includes the state’s COVID relief programs, nursing homes deaths, transit funding and more. “It is very important that we act with a serious sense of urgency.”