Janine Jackson interviewed Economic Policy Institute’s David Cooper about the “we all quit” phenomenon for the August 6, 2021, episode of CounterSpin. This is a lightly edited transcript.

Janine Jackson: “We all quit.” A very good Motherboard story about fast food, retail and hospitality workers resigning from their jobs nevertheless began by telling readers that they “may have seen photos of it go viral,” or “may have even experienced it in real life, if you’ve dined at a Chili’s or Applebee’s, and the hostess apologizes for the extra-long wait times.”

The fact that news media often assume that their readers will have only experienced a shift in the waged labor force as consumers—of food or news or swimming pools—but not as workers, tells you a lot about the perspective from which this and many another economic phenomenon is being reported. 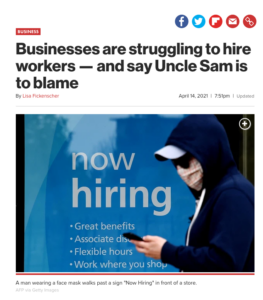 The New York Post did not center workers in its reporting. Instead, it amplified employers’ claims that unemployment benefits and “Uncle Sam,” (4/14/21) have made workers reluctant to work.

If reporting on the workforce centered workers, we might get less of the approach reflected in a PR pitch I received just this morning for a guest for this show:

With more and more companies offering big perks to attract and retain workers, a big question to ask is how many companies big or small, expect or plan to grow if they have to spend a lot of money on bonuses, or other incentives, just to keep a manageable workforce?

Joining us with a different angle is David Cooper, senior economic analyst at the Economic Policy Institute, and deputy director of EARN, the Economic Analysis and Research Network, a national network of state-level policy research and advocacy organizations. He joins us now by phone. Welcome to CounterSpin, David Cooper.

David Cooper: Great to be here. Thanks for having me.

JJ: It sure seems like something important is afoot. But we know media sometimes make a wave out of a ripple, and a sea change out of a seasonal shift, depending on the needs of the news cycle. So let me just ask you, first: What do you see actually happening, in terms of workers leaving jobs, or not returning to jobs? What observably is going on?

DC: I think it’s really important to keep in mind, right off the bat, that we’re in a very unique moment in the economy, in the sense that parts of the economy have essentially shifted from zero to 100 almost overnight. A lot of these businesses that are complaining about their inability to hire workers have seen demand just surge; we’re talking restaurants that were closed for months that are reopening, and suddenly having lots of customers coming through the door.

Even under normal circumstances, setting aside these other factors that might be affecting people’s job decisions, it’s always going to take time for employers to staff up under those circumstances, to try and rebuild their workforce when many of them cut the vast majority of their staffs early in the pandemic last year. So some of this rhetoric, I think, is being overblown, just because of the uniqueness of the circumstances.

JJ: It’s funny how corporate media, in terms of understanding things like this, often evoke a kind of textbook supply-and-demand economic theory that presumes a power seesaw between labor and management. But then when labor looks like actually getting more leverage, that’s suddenly weird and aberrational.

Employers’ decisions—“Yes, we’ll take that subsidy, and no, we won’t create jobs,” “Yes, we’ll say we’re forced to lay off workers because of costs, but at the same time, we’ll give huge bonuses to our executives”—those kinds of decisions, in media’s lens, are fundamentally unremarkable. They’re just kind of market logic at work.

But then at a time like now, when workers seem to be choosing, it becomes like a psychological issue: “What did the pandemic do to their brains?” And it suggests that media’s frequent and often implicit reference to a market economics that maintains a balance of power between workers and owners—that’s not really the framework that we’re working with. Are media at least moving past the idea that this is about people not wanting to work? What does this say about the general understanding that corporate media offer in terms of the way power plays out in the workplace?

DC: I think you’ve hit on a really important point, and that is that there is this assumption that is baked into our theories of the economy, that workers and employers have equal bargaining power. That if an employee doesn’t like their job, they can just instantly go out and find another one, without suffering any consequences. That if they think their pay is too low, all they have to do is just go and look around a little bit, and they can immediately go and find another one, and employers can just immediately react and raise their pay. 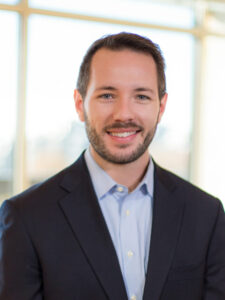 And, obviously, the world is far more complicated than that. And there is always a fundamental imbalance in the bargaining power of employers and employees. And when you’re talking about particular portions of the labor market, like low-wage workers, the imbalance in power is even more pronounced.

And what we’re seeing right now, coming out of the pandemic, is a lot of people got to see that when government stepped in, when lawmakers chose to act and gave them more generous, more accessible unemployment insurance; gave them some breathing room to find suitable jobs, not just the first one available; when we give workers the ability to take time off to care for themselves, or a family member who got sick, when some states got tougher rules on workplace safety;  when some employers at least for a little while adopted hazard pay, to acknowledge the additional workloads that these frontline jobs were taking on; workers got to see that there is an alternative, that when they have some of this backing of government and policy, they are given a little more leverage.

And that might allow them to exert a little more pressure, to actually expect more from their employer, or to go out and look for a job that’s more suitable for their circumstances, which I think, unfortunately, for most of the last 40 years, corporate interests and policymakers, either through acts of commission or acts of omission, have largely undercut workers’ bargaining power. They’ve just handed more leverage over to employers in pretty much every way possible.

JJ: I think sources matter a lot, you know, who gets to speak in these articles, and who gets to offer their analysis or understanding of what’s going on. I think maybe the tenor is shifting a bit away from the idea that people don’t want to work, or people are lazy, or somehow they’re living high on the hog off these unemployment checks, which I don’t know who you’d have to be to imagine that $1,000 or $1,200 is suddenly making a person pick a different way in life.

JJ: But in terms of media, are there things you’d like to see reporters who are covering this workforce issue do more of or less of, or people they could listen to more, or maybe listen to less? What’s your sense of how media might illustrate this issue more accurately or usefully to folks?

DC: I think that talking to the workers who have stepped away from the workforce right now, who maybe haven’t returned to jobs, and ask them, what is it that they want to get out of work? Because it’s more than just pay. I think that’s one of the other realizations that folks are having right now.

Some employers are raising wages, and that’s great; that needs to happen. Jobs shouldn’t be paying poverty-level wages. Motherboard reported that “precarious, low-wage workers” have the leverage to demand fair wages as a result of a “better social safety net,” (7/23/21).

But it’s more than that. It’s things like the availability to take time off to care for a loved one that’s sick, or flexibility in scheduling to accommodate childcare responsibilities. What are the working conditions like? Will they have to police mask-wearing or social distancing? How supportive will employers be if they come into conflict with customers? What’s the potential for advancement? Do folks view these jobs as potential stepping stones in a career, or is it just a one-off?

And another thing that’s important right now, I think, is workers are understandably questioning the future of particular employers or industries. So many businesses have suffered and gone under in this pandemic. I think it’s not unreasonable for a prospective employee to be considering, well, do I really think this job is going to be around six months from now? Is it worth going into this employer, not knowing what the future is going to hold for them?

And I also think it’s important for media to be considering what workers will get out of a particular business’s success. What are businesses doing to bring employees into the success of the business? Is it just going to be longer hours and more work, or are they going to get to share in some of the profits and benefits that come from that business’s success?

I think employees workers are scrutinizing these questions a lot more carefully now, because they’ve gone through this trauma, where they’ve come to realize that in many cases, there are things that are not worth a minimum wage job.

JJ: I’m going to end you there and pick you up in the future on this important set of issues. We’ve been speaking with David Cooper; he’s senior economic analyst at the Economic Policy Institute, and deputy director of EARN, the Economic Analysis and Research Network. You can find work online at epi.org. Thank you so much, David Cooper, for joining us this week on CounterSpin.

DC: My pleasure. Thanks for having me.

The post ‘There Is a Fundamental Imbalance in the Power of Employers and Employees’ appeared first on FAIR.