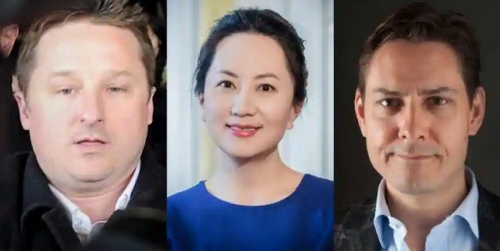 For neither man nor angel can discern hypocrisy, the only evil that walks invisible, except to God alone.

Simply put, hypocrisy is when words and actions don’t agree. It is revealing when one applies this straightforward definition to the cases involving two Canadian detainees in China, business consultant Michael Spavor and former diplomat Michael Kovrig, and the Chinese detainee in Canada, Huawei Technologies executive Meng Wanzhou.

The United States is seeking the extradition of Meng for fraud-related charges. The two Michaels were apprehended soon after in China and charged with spying on national secrets and providing state secrets to foreign entities.

On Wednesday 11 August, Spavor was sentenced by a Chinese court to 11 years in prison.

Canadian prime minister Justin Trudeau was dismissive of the verdict. “Today’s verdict for Mr. Spavor comes after more than two and a half years of arbitrary detention, a lack of transparency in the legal process, and a trial that did not satisfy even the minimum standards required by international law.”

There are many parts of this statement by Trudeau that require deeper consideration.

First, Trudeau notes the duration of the detention, more than two and a half years. It is commonly held that justice delayed is justice denied. When the wheels of justice grind too slowly, there is a danger of a gross injustice being committed. When detainees are found to be not guilty, a nonrecoverable portion of their lives has been squandered. If Michael Spavor and Michael Kovrig are innocent, then a gross injustice has occurred. However, this applies equally in the case of Meng Wanzhou who has been under house arrest for over two and a half years.

Does Trudeau’s concern for long-term detention only apply to Canadians? Has Trudeau ever uttered one word regarding the over a decade-long detention and torture of Julian Assange for revealing US war crimes, a detention for which Canada may well be complicit?

Second, Trudeau claims the detentions are arbitrary. However, if the verdict reached was just, then the fact that Spavor was found guilty would indicate that his detention was not arbitrary.

The Dandong Intermediate People’s Court handled the case of Spavor in strict accordance with the law, fully protected Spavor’s litigation rights, respected and honored the Canadian side’s consular rights such as visiting and receiving notification, and arranged for the Canadian side to attend the trial. However, Canada, disregarding the political nature of the Meng Wanzhou incident and acting as an accomplice of the US, has detained Meng, an innocent Chinese citizen who didn’t violate any Canadian law, for nearly 1,000 days. This is arbitrary detention in every sense of the term, the embassy in Canada said.

The Chinese Embassy in the US also said Meng has never violated any Canadian law but has been detained by Canada until today. Canada chooses to be an accomplice to the US and this is a textbook example of arbitrary detention by “exercising leverage over a foreign government.”

And as the film The Secret Trial 5 makes clear, arbitrariness is part of Canada’s so-called justice system; people can be locked away for many years in Canada without ever being charged.

Third, Trudeau has not denied or refuted the charges against the two Michaels. His words are directed against the process.

Trudeau’s statement continues: “For Mr. Spavor, as well as for Michael Kovrig who has also been arbitrarily detained, our top priority remains securing their immediate release. We will continue working around the clock to bring them home as soon as possible.” In this regard, the Canadian authorities’ sentiments and actions for the Michaels are shared by Chinese authorities for Meng.

Canadian foreign affairs minister Marc Garneau said the verdict against Kovrig is “not acceptable in terms of international rules-based law.” Such a statement falls flat in light of the recent charge that Canada is violating international law by selling arms to Saudi Arabia, arms that can be used to continue its aggression against Yemen. One needs to dig much deeper into what the rule of law means for Canada. There is no escaping the fact that the country is a colonial-settler state imposed through genocide against the Original Peoples of the landmass designated Canada by navigator Jacques Cartier. Still today, one headline makes clear that “Canada Is Waging an All-Front Legal War Against Indigenous People.” This points to the quintessence of Canada and its political class. Despite having seized political control through genocide, having committed to reconciliation, and having pledged (as Trudeau did) to a “renewed, nation-to-nation relationship with First Nations peoples … [as] a sacred obligation,” the words have exposed betrayal. Instead capitalist exploitation continues unabated while the Canadian state stonewalls reconciliation and legal redress for the Original Peoples.

Cong Peiwu, China’s ambassador to Canada, rejected accusations that Spavor’s trial was unfair and not open. “I would like to say that the minimum standard is for other countries to respect our judicial sovereignty. So here I would like to stress that actually it’s the Canadian side which did not meet the minimum standard of the international norm.”

What is the American Gambit?

Foreign affairs minister Garneau seems to have faith in American president Joe Biden being able to secure the release of the Michaels by “treating them as if they were American citizens detained by China.” This is following previous president Donald Trump politicizing Meng’s proceedings: “If I think it’s good for what will be certainly the largest trade deal ever made – which is a very important thing – what’s good for national security, I would certainly intervene if I thought it was necessary.”

It points to a double standard for extradition as a means for achieving justice. Consider the case of Anne Sacoolas, the wife of a US diplomat who the US refuses to send to Britain to stand trial for her hit-and-run accident that killed teenager Harry Dunn in 2019. Some Americans, it seems, are beyond the reach of the law.

China is well aware of what is transpiring. China’s Huawei is the world leader in cutting-edge 5G technology. The US fears being left behind and is seeking to dissuade other states from using that technology. Thus, China’s government views Meng’s arrest as part of US efforts to hamper its technology development. Neither are the allies of the US exempt from America’s extraterritorial reach as a weapon to stymie competition. The French company Alstom experienced this as its former senior executive Frederic Pierucci was arrested and imprisoned for over 2 years in New York. Alstrom eventually had to pay a huge fine of US$772 million. Said Pierucci, “That [fine] facilitated the buyout of 70 per cent of Alstom by its main American competitor General Electric, blocking a potential merger between Alstom and Shanghai Electric Company.”

Canada is harming its relationship with the rapidly developing economic colossus of China to appease the United States. However, it ought to bear in mind how the US swooped in to replace Australian exports to China. This was after Australia aligned itself with a belligerent US policy toward China causing China to curtail imports from Australia.

Yesterday (14 August), Canada’s National Observer published an ad hominem piece calling for an exchange of detainees. It begins, “The ugly messy truth about the two Michaels is that we must get past our indignation, however justified, over China’s gross violations of all international norms.” What is the justification? What if Chinese indignation is justified? What adduces the hyperbolic “China’s gross violations of all international norms.” All?

The National Observer grants, “Meng is charged purely for geo-political gamesmanship.” What the newsletter does not discuss is that Meng previously turned down an offer for her release in return for admitting wrongdoing.

Doubts can be gleaned from the notes of the associate chief justice Heather Holmes who is presiding over the extradition case,

Isn’t it unusual that one would see a fraud case with no actual harm, many years later, and one in which the alleged victim — a large institution — appears to have numerous people within the institution who had all the facts that are now said to have been misrepresented?

The National Observer insults China by calling its government a “regime.” The Chinese “regime” is one that lifted its entire population out of absolute poverty. Elsewhere on Canadian streets, one will see too many homeless people, people whose dignity is disparaged by having to rely on food banks, begging, or dumpster diving to quell hunger.

So which “regime” is interested in looking after the people — all its people?

Meanwhile, Kovrig, who stood trial in March, continues to await word on a verdict. And Meng awaits a decision on the extradition outcome.

The post Justice and Politics: When Words are Betrayed by Deeds first appeared on Dissident Voice.