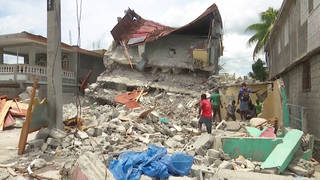 We get an update from Les Cayes, Haiti, not far from the epicenter of Saturday’s earthquake, as Tropical Storm Grace drenched parts of the country and the death toll has now climbed to more than 1,400, with nearly 7,000 suffering from injuries amid overwhelmed hospitals. The impact from the latest earthquake is “just as great” as the devastation from the 2010 earthquake, says Jacqueline Charles, Haiti and Caribbean correspondent for the Miami Herald. “Haitians are not sitting around and waiting for international aid. They’re not waiting for their national community to come and rescue them,” Charles says, noting the presence of many makeshift hospitals despite medical supply shortages. She also describes how Haiti is is grappling with the aftermath of the assassination of Haitian President Jovenel Moïse.