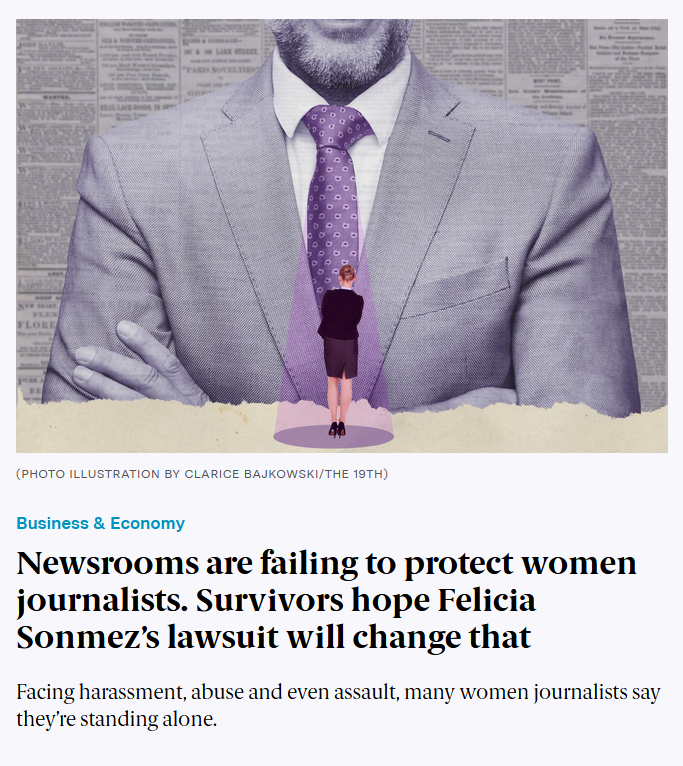 The 19th (8/9/21) reported that a Washington Post editor equated speaking out about being sexually assaulted to having “taken a side on the issue”—presumably against.

When sexual assault allegations came out against then–Supreme Court nominee Brett Kavanaugh, former Washington Post political reporter Felicia Sonmez expected to cover the story. But, according to a discrimination lawsuit she recently filed, editors said she couldn’t, partially because she had just made public statements recounting being sexually assaulted the year prior.

In the eyes of the Post’s top editors, her own experience was “too similar” to Christine Blasey Ford’s to ensure her objectivity. The ban ultimately ended up encompassing all of the #MeToo movement. It was not lifted until March 2021 after Sonmez spoke publicly about the publication’s actions.

Sonmez’s lawsuit accuses the Post of derailing her career because she is a woman and a survivor of sexual assault. And the Kavanaugh case is not the only instance she cites.

In early 2020, when basketball player Kobe Bryant and his 13-year-old daughter Gianna died in a helicopter crash, social media were flooded with fans mourning the tragic death of a cultural icon. A more shameful part of Bryant’s legacy—an ultimately dropped 2003 rape case that had physical and DNA evidence, and even a partial confession from Bryant—went largely unmentioned (FAIR.org, 7/14/20). Amid the collective mourning, Sonmez tweeted a link to a 2016 Daily Beast article (4/11/16) published before Bryant’s retirement: “Kobe Bryant’s Disturbing Rape Case: The DNA Evidence, the Accuser’s Story and the Half-Confession.”

Sonmez’s tweet resulted in trolls sending her death and rape threats, and demanding her firing. Someone shared her address online, forcing her to move from her home to a hotel. Rather than support and protect Somnez, Post managing editor Tracy Grant called her to say the paper was suspending her. Somnez was eventually reinstated after the Washington Post Newspaper Guild organized on her behalf.

The idea that experiencing sexual violence makes someone unable to fairly report on it is a relic of the journalistic myth of “objectivity”—that giving equal weight to all sides of a story, no matter how ridiculous, is the pinnacle of responsible reporting (FAIR.org, 7/20/12). One would hope that journalists covering sexual violence would be opposed to it, whether or not they had experienced it themselves.

Publications that maintain that having been sexually assaulted poses a conflict of interest in covering sexual assault stories, of course, should first interrogate how prevalent harassment and assault against women are in their industry.

Sonmez’s alleged sexual assault  occurred at the hands of another journalist, Jonathan Kaiman of the LA Times, when they were both living in Beijing. He had also been accused of assaulting a woman named Laura Tucker, who recounted the incident in a Medium article (1/10/18) that Sonmez says inspired her to come forward.

The Centers for Disease Control found in 2015 that nearly 1 in 5 women experience rape or attempted rape in their lifetimes, but rape and other forms of sexual abuse affect a significant part of the population, regardless of gender. The Rape, Abuse & Incest National Network (RAINN) reports that 1 in 33 men have been victims of rape or attempted rape. Transgender people of either gender are particularly vulnerable; a 2015 survey found that 47% in the US have experienced sexual assault in their lifetime. If news outlets were to prevent everyone with a #MeToo story from covering #MeToo-related news, they might find themselves short-staffed. 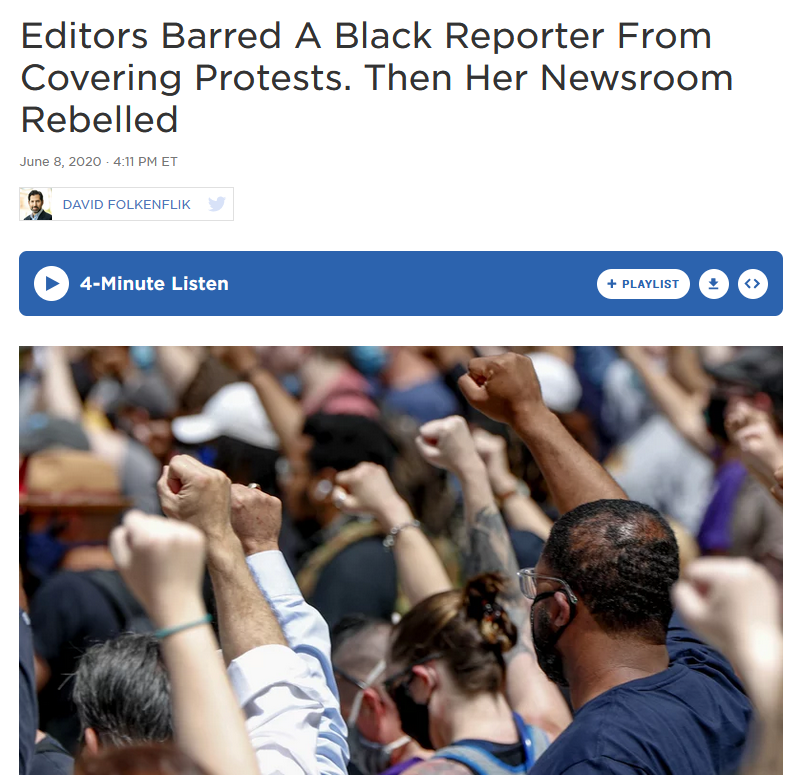 NPR (6/8/20) reported on the case of the Pittsburgh Post-Gazette’s Alexis Johnson, who faced “retribution for writing a flippant tweet comparing looters to country music fans after a concert.”

The Washington Post isn’t the only outlet that has suspended or fired journalists under the guise of protecting “objectivity” and “neutrality.”  During the summer of 2020, editors banned a Black Pittsburgh Post-Gazette reporter from covering local protests after he posted a tweet comparing looters to country music fans after a concert. Meanwhile, a white reporter who tweeted a disparaging comment about looters received a warning, but was not banned until the Post-Gazette’s union drew attention to the unequal treatment (NPR, 6/8/20).

Both reporters technically had a “bias,” but the white one’s comments were overlooked until the union spoke out.

In 2017, former Marketplace reporter Lewis Wallace, who is transgender, wrote about being fired from the outlet just days after Donald Trump became president (Lewis Wallace, 1/31/17). At the time, Wallace wrote on his personal blog (1/27/17) about navigating being a transgender journalist who does truthful, ethical work amid the rise of Trump’s bigotry and lies:

Neutrality isn’t real: Neutrality is impossible for me, and you should admit that it is for you, too. As a member of a marginalized community (I am transgender), I’ve never had the opportunity to pretend I can be “neutral.”… Obviously, I can’t be neutral or centrist in a debate over my own humanity. The idea that I don’t have a right to exist is not an opinion, it is a falsehood.

Wallace recounted that when Marketplace’s managing editor and executive producer informed him of his suspension, they told him the outlet believed in objectivity and neutrality—words that do not appear in Marketplace’s code of ethics.

In the piece where he announced his firing, Wallace wrote:

I hope people understand my messages here: that we cannot have token diversity without making actual space for the realities of being a marginalized or oppressed person doing journalism; that we cannot look to the same old tools to defend truth in reporting; that we must work harder and do more to truly represent the communities we report on and on behalf of in order to build trust and remain relevant. 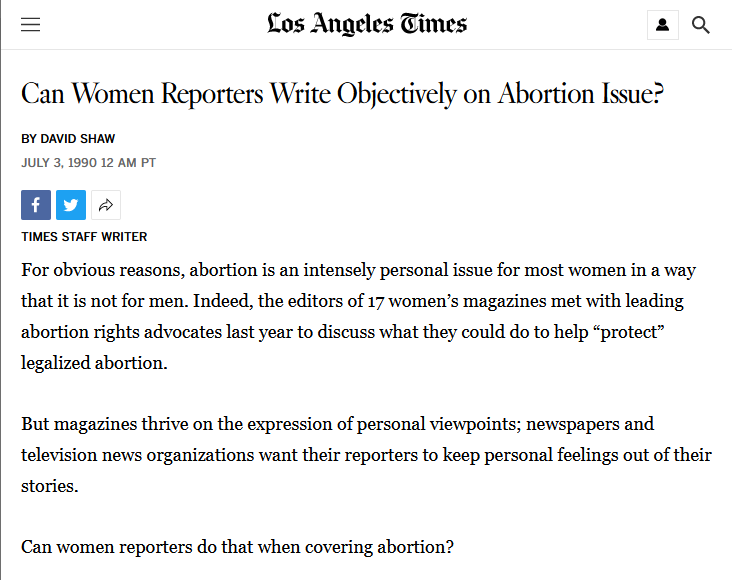 The LA Times‘ David Shaw (7/3/90) quoted a reporter on abortion: “If you are a woman reporter under the age of about 50 . . . you are writing about something that could happen to you.” This is a standard that would make it difficult to find a reporter to write about climate change, nuclear war, mass shootings, pandemics or any number of issues.

Journalists (especially those who are white and male) have long been interrogating whether women can possibly be objective enough to cover topics that affect them. In 1990, for instance, LA Times writer David Shaw (7/3/90) wondered, “​​Can Women Reporters Write Objectively on Abortion Issue?”

“​​Newspapers and television news organizations want their reporters to keep personal feelings out of their stories,” he wrote. “Can women reporters do that when covering abortion?”

FAIR (Extra!, 7–8/90) highlighted Shaw’s and others’ skewed perception of abortion coverage, and their failed attempts to call out what they saw as pro-choice bias in the news. FAIR pointed out that though Shaw claimed women reporters cited pro-choice viewpoints more than anti-abortion viewpoints in print, citing a 1989 study by the conservative Center for Media and Public Affairs, he failed to mention that male TV reporters cited more anti-abortion sources–and that men outnumbered women reporting on abortion by 2–1. (Plus, for every woman who has an abortion, there is a man who did not become a father.)

Placing white, straight, cisgender men who have not experienced such forms of disadvantage at the “objective center” is entirely arbitrary. Deciding that only those who can report on issues from their armchairs can be “neutral” perpetuates the media’s misrepresentation of stories that don’t center white, wealthy men.

Having an experience with an issue can actually help journalists tell marginalized stories sensitively and accurately. In an interview with The 19th (8/9/21), Alex Stuckey, who shared a Pulitzer Prize for her work at the Salt Lake Tribune examining mishandled sexual assault reports at Utah colleges, said being a sexual assault survivor made it easier to speak to her sources and make them feel comfortable.

​​“As a survivor, I bring a perspective that’s important. I know how to approach victims because I’ve been a victim,” she said. “Just because this happened to us doesn’t mean we don’t know how to do basic journalism.”

The post Is Surviving Assault a Conflict of Interest? appeared first on FAIR.