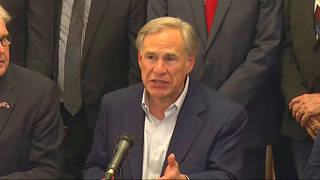 Texas Governor Greg Abbott has tested positive for the coronavirus, just one day after he attended a packed indoor Republican event in Dallas, where he and most attendees were unmasked. Abbott, who said he was not showing symptoms of COVID-19, imposed a statewide ban on vaccine and mask mandates last month, though a judge later blocked the ban on mask mandates. Abbott has also tried to blame immigrants for the spread of COVID-19 in Texas and issued an executive order last month instructing state troopers to stop any vehicle suspected of transporting migrants “who pose a risk of carrying COVID-19.” Abbott’s rhetoric is “simply shifting blame” from his own policies to migrants, says Manoj Govindaiah, the director of policy and government affairs at Texas-based RAICES, the Refugee and Immigrant Center for Educational and Legal Services. “Public health officials roundly agree that migrants are not necessarily bringing in COVID in any higher numbers than anyone else,” says Govindaiah.