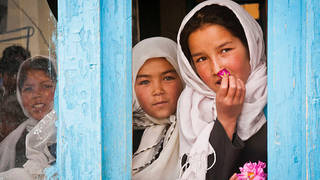 We look at how the rights of women and ethnic minorities will be impacted by the Taliban takeover in Afghanistan with two Afghan women who fled their country. Mariam Safi, who left Kabul last month and is founding director of the Organization for Policy Research and Development Studies, says the Taliban’s rapid advance across the country surprised many people who had been hoping for a negotiated end to the war. “We had felt that there would be some space for a political settlement,” says Safi. “What has happened has certainly caught everyone by surprise.” We also speak with journalist Zahra Nader, a member of the Hazara minority who says the community risks losing its rights under Taliban rule. “There is lots of discrimination, systematic discrimination, against Hazara people in Afghanistan,” says Nader. “But now it’s going to get even worse.”