I released a song called Rome is Burning to most streaming platforms on March 1, 2021. The next day the video of the song was posted on YouTube. The song and accompanying video are based on the mass protests that took place in 2020 against state organized racist violence and oppression triggered by a bystander’s filming of the brutal police killing of George Floyd.

To send the song/video to activists and organizations in the forefront of resistance, I signed up a Facebook account, which previously I did not have. My accompanying message on Facebook with the link to the video said: “We need to build a new society fit for human beings! I hope my new song/video contributes to this movement!”

After sending the message and link on Facebook to just five Black Lives Matter chapters a popup appeared on my screen saying my Facebook account was suspended and I was required to provide my phone number. I complied and received a text with a code that I had to enter into the Facebook message box to reactivate my account. 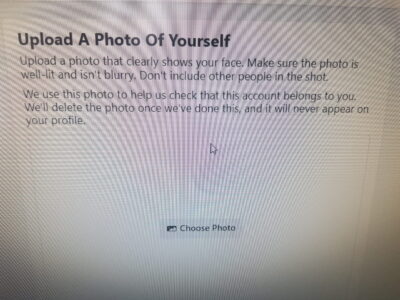 After sending four more messages to BLM chapters another popup from Facebook said I needed to provide a clear picture of myself for purposes of verifying my account, which I did. However, this made me wonder how Facebook could possibly verify the person in the picture was me. Another Facebook message quickly arrived confirming receipt of my information with the warning that if my account activities did not follow “Community Standards” the account would remain disabled. No further information was provided as to how long the account would remain suspended, who was reviewing the account and what action, if any, had to be taken to reactivate the account. 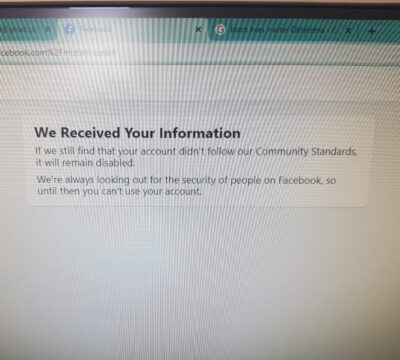 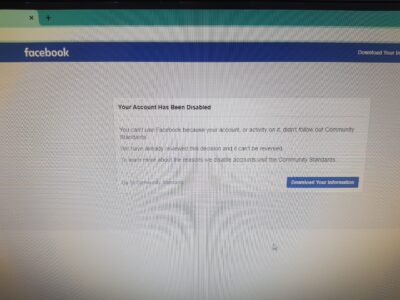 The following day when I tried to sign in to Facebook, a new popup message said my account was permanently disabled because I did not follow “Community Standards.”  The message also stated the decision could not be reversed. No reason was given for canceling my account other than providing a link to Facebook’s “Community Standards,” which lists everything under the sun as a potential violation of terms of use. Facebook offered no possibility to discuss the specifics surrounding what it deemed to be a violation of its standards or to enter into any dialogue with whoever made this decision.

In my view Facebook’s action qualifies as monopoly censorship and suppression of speech and culture. Not for one second do I agree with the argument that Facebook is a private company, therefore it has the right to decide whatever it wants. Facebook is a company operating as a public utility in Canada and therefore must answer to Canadians and modern-day principles of freedom of speech, culture and conscience. Canadians and all citizens of this world cannot allow arbitrary decisions of private interests made behind closed doors to decide whether or not someone can participate in social and political communications.

Community standards are for the community to decide not some faceless individuals parading as dictators. Forms have to be developed to allow the people to decide community standards that serve the common good both in the general sense and particular cases. Faceless individuals in positions of privilege and power defending their private interests, wealth, world view and outlook must not have the right to decide for the people.

At no point did I receive any indication of violation of any given rule or practice for which discussion, debate and argument could be made. No justification was provided when my account was banned other than Facebook has the right to do so. No one, including myself, was given an opportunity to defend and discuss the views presented on the site and video or the reasons Facebook dismissed them as contrary to community standards. I am confident that the broad Canadian and American public would not find my message, song or video to be out of line with modern day principles of freedom of speech, culture and conscience and acceptable moral standards. Increasingly there are public outcries which find the practices of Facebook and other Big Tech companies undemocratic and reminiscent of medieval autocracy and its imposition of religious obscurantism as the only acceptable thinking, speech, culture and conscience.

Facebook banning of my account is part of a trend that activists concerned with the direction of the world face on all social media platforms, which includes algorithms for “throttling” and “shadow banning” to limit communication and the sharing of opinions with others. These practices amount to suppression of speech and are a form of thought control by those in charge of these global tech cartels.

Progressive voices are not alone in being silenced. Conservatives have had their opinions eliminated as well. The most famous case involving the suspension of the Twitter account of the former President of the United States can be summarized as in-fighting between factions of the rich and powerful.

Freedom of speech and conscience

If someone is to be banned or suspended from having their voice heard for violating “community standards” on a public platform then according to modern principles of freedom of speech and conscience, a public hearing or trial must be held on both the particular alleged violation and on the validity of the so-called community standards.

Community standards set by oligarchs are unacceptable as the final word and verdict, as if from their privileged positions of wealth and power they have the medieval right to decide what can be said and thought. Community standards are developed in practice as people engage to defend their rights and develop forms to ensure the rights of all are not violated without exception. The defence of freedom of speech, culture and conscience lies in the fight to defend the rights of all. I believe my song Rome Is Burning is a contribution to that fight and banning of it or limiting its promotion is an attack on the rights of all.

Social and political forms must be developed to encourage broad discussion involving the people to decide important decisions including the potential banning of individuals or groups. If countries such as Canada and the United States are to be considered modern and just, the control over such decisions must be in the hands of the people not a privileged few gathered in some government or private backroom who declare they can decide and exercise control simply because they own or control some institution or won an election. New social and political forms must also present the facts detailing how certain actions have caused harm and in the case of banning give the accused an opportunity to explain themselves and debate and challenge the decision. All of this must be open and aboveboard and not be taken lightly unlike the practice of Facebook and others.

Freedom of conscience and the right to freedom of speech and culture especially in ideological form go to the very core of what it means to be a modern human where people have rights by virtue of being human. Violation of these rights point to the dubious position the people find themselves in with regard to mass communication and social media. Powerful monopolies and cartels of Big Tech own and control these public utilities and forms of communication; they have given themselves the right to decide and control how they are used and what is said. This control by rich and powerful private interests violates the right of the people to decide and control those things that affect their lives and these crucial matters involving freedom of speech, culture and conscience, the exchange of ideas and discussion, how to develop their relations with others and with nature and to solve problems nationally and internationally without violence.

At this point in history people expect and demand as a public right instant mass communications without interference. Clearly, private determinations using the excuse of ownership of means of communication to define community standards and declare what is acceptable thought, speech and culture are not an objective or legitimate way to oversee mass communications.

Facebook and other tech companies may be privately owned but they cannot and should not be considered private companies. They are public utilities operating globally and accountable to the people. Facebook and others must conduct themselves with the permission of Canadians and in accordance with Canadian standards and regulations decided and established by Canadians not by arbitrary dictate coming from some distant head office representing private interests.

Facebook is said to employ 60,000 workers whose work built the public utility and means of communication and allow it to operate. Those thousands of skilled workers were trained and educated within schools and institutions that can only be considered public and products of the people’s collective thought material handed down from thousands of years of work and struggle to produce, live and develop. Facebook is part of an infrastructure of means of mass communication that belongs to all the people not a select and privileged few.

Another disturbing aspect of Big Tech’s control of speech is its connection to the political police of the U.S.-led imperialist system of states and the surveillance of citizens, including the collecting and tracking of personal information and data. Many are familiar with the Cambridge Analytica scandal, which is just the tip of the iceberg when it comes to activities of the U.S.-led “Five Eyes” in spying and interfering in the political affairs of the peoples and nation states.

If certain individuals in Facebook object to the song and video and want to censure them, they should present their views openly and in debate with the people. Their position of ownership and control of a public utility does not give them the right to act with impunity as dictators and censors. Denial of freedom of speech, culture and conscience are aspects of condemning people to civil death. Opposition to this practice is a central theme of the song Rome is Burning. People of African descent, Indigenous peoples, political activists and others have long suffered civil death in North America from the state structures that have been established and entrenched by a small ruling elite over the past hundreds of years to protect their right of property ownership to exploit the work of others. Police violence, mass incarceration, and killing of Black and vulnerable people reflect the continuing civil death of many; resistance to this is both important and necessary. State-organized inequality, racism, poverty and wars cannot continue and the people must link their arms in resistance to open a path to build the New as the song indicates.

Public utilities and platforms of mass communication must be accountable to the people. They must allow and encourage free exchange of ideas and debate over what has to be done to move the world forward. They must come under the control of the people and not the other way around; the problem posed is how to bring this about. The people cannot be silent on this and must raise their voices to make it happen.

My and others’ banning from Facebook are aspects of continuing the autocratic practice of condemning people to civil death and blocking a path forward to peace, equality and justice. If Facebook maintains its stance as the privileged arbiter of free speech, culture and conscience, then the people will condemn it to the dustbin of history faster than it hit the scene. I am certain the people will not tolerate its arrogance and dictate because freedom of speech, culture and conscience are rights that belong to human beings and are a matter of life and death to build a new society which leaves behind the old world of inequality, violence, denial of rights, poverty and war. 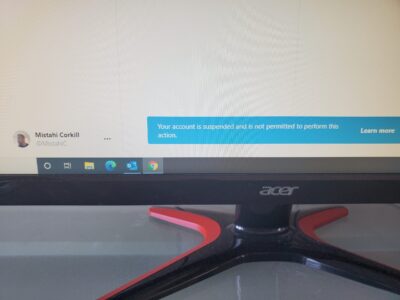 This content originally appeared on Dissident Voice and was authored by Mistahi Corkill.