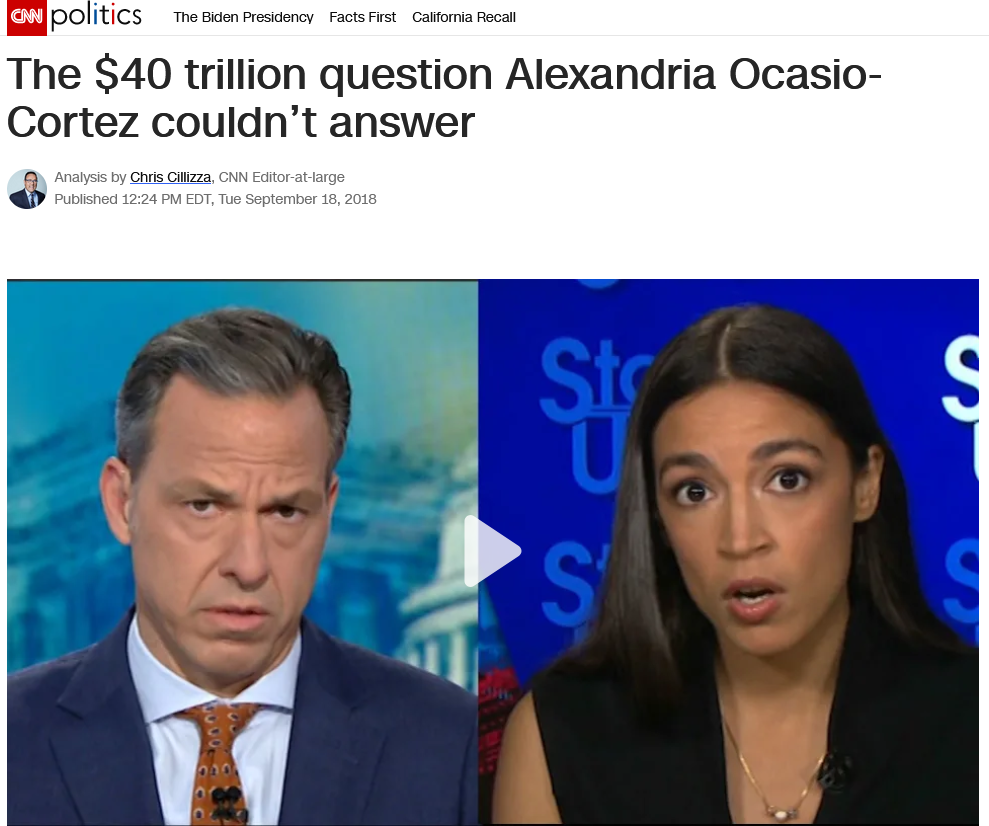 Alexandria Ocasio-Cortez’s response to Jake Tapper that her proposals would save far more than they cost was ruled to be not an answer at all by Tapper’s colleague Chris Cillizza (CNN, 9/18/18).

Jake Tappers’ career is inextricably linked to America’s so-called longest running war. His travels there and book–turned–Hollywood film detailing his exploits are how, more than any other beat, he polished his reputation as a Serious Journalist, and not just another pretty suit behind a desk. He’s reported dozens of stories on the conflict, done book events, tweeted nonstop for years about the war in Afghanistan, and done scores of segments on the conflict, including a two-hour primetime special earlier this month lamenting “what went wrong” in the war for the United States.

The second-most essential beat to cementing his gravitas has been his Very Serious concern about debts and deficits—i.e. grilling liberals, leftists and progressives for over 20 years about “how they will pay for” broad social welfare programs.

Suspiciously, these two primary Tapper beats have never crossed paths. Which is strange, because, as a new Brown University study shows, the post-9/11 wars have cost the Pentagon $14 trillion, one-third to one-half of which went to US military contractors. That’s between $4.6 trillion and $7 trillion, just on contractors for the post-9/11 wars. In one year alone—fiscal year 2020—the study finds that Lockheed Martin received $75 billion in contracts from the Pentagon.

The Afghanistan War was itself a huge expense. A separate study from Brown University finds, “Since invading Afghanistan in 2001, the United States has spent $2.3 trillion on the war, which includes operations in both Afghanistan and Pakistan.”

So what has Tapper highlighted to show the risks of runaway government spending? Let us examine items that have compelled Tapper to ask, “How will we pay for it?”

Here he is grilling New York Rep. Alexandria Ocasio-Cortez over several of the items, all in one clip: 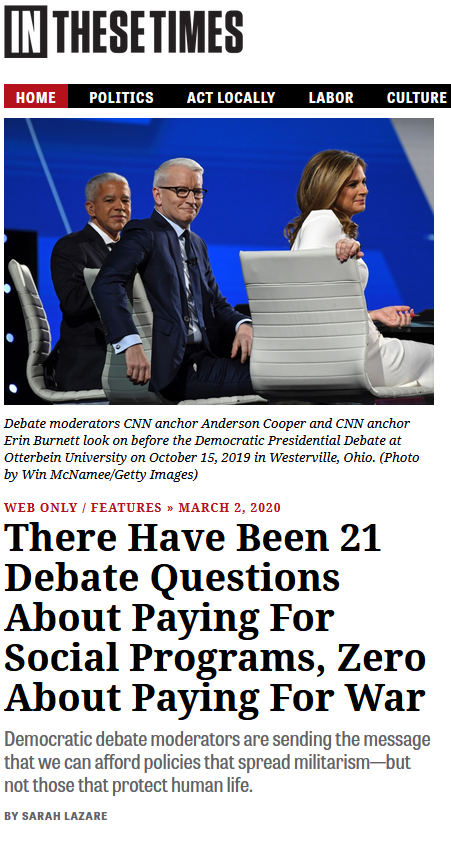 Sarah Lazare (In These Times,  3/2/20) noted that debate moderators “are saying we can afford policies that spread militarism—but not those that protect human life.”

Tapper has used some of the biggest platforms possible to engage in this line of questioning. As Column contributor Sarah Lazare noted in March 2020, “Night one of the second democratic debate, CNN’s Jake Tapper asked four questions in close succession, grilling candidates on how Medicare for All would be paid for.” In just one example, he said to then-candidate Sen. Elizabeth Warren, “At the last debate, you said you’re, quote, ​‘with Bernie on Medicare for All’”:

​Now, Senator Sanders has said that people in the middle class will pay more in taxes to help pay for Medicare for all, though that will be offset by the elimination of insurance premiums and other costs. Are you also, quote, ​”with Bernie” on Medicare for All when it comes to raising taxes on middle-class Americans to pay for it?

As Lazare noted in the piece, there were zero questions asked to the centrist Democrats on stage how they planned on “paying for” their support for large military budgets and wars.

Now, let us examine the items Tapper has never asked they would pay for it (costs over 20 years)

An audit of transcripts, tweets and articles authored by Tapper reveals no questions over deficit concerns for these big ticket items.

The reason for this glaring inconsistency is that high-profile media brands like Tapper simply do not view the expense of empire maintenance to be debatable, contestable or subject to critical analysis. This expense just is—like gravity or the universal constant. These institutions exist, always have existed, and are beyond the realm of politics. Whereas programs that house the homeless, feed the poor, combat climate chaos, provide childcare, educate people, build roads and schools, and provide jobs for the working class are “expensive” “progressive” “wishlists” with “price tags” that need to be constantly justified item by item to the half cent.

Never mind that, year after year, the Pentagon can’t complete a basic audit and can’t account for $21 trillion in spending. The real drivers of our deficit are dreaded liberal programs. The banal and unremarkable war machine whose bloat and borderline criminal waste is rubber stamped every year by Congress and corporate media alike requires no such interrogation.

Along with schlocky, mugging Troop Defender, Concerned Deficit Scold is how Tapper rose to prominence at CNN. While at ABC News, Tapper would make presser spectacles out of his Deep Worry over the national debt, grilling Obama press secretary Jay Carney over the Obama Stimulus (a stimulus we now know was way too small), while engaging in facile—and incorrect—comparison to family budgets borrowed directly from Pete Peterson front groups:

.@jaketapper cut his centrist bona fides during the Tea Party years by–

So where is the deep concern after this high-profile recent study found that we spent $14 trillion on wars since 2001? What about these costs which we will “pass down to our children”? Where is Tapper hauling in war hawks lobbying to stay in Afghanistan, like senators Lindsey Graham and Bob Menendez, demanding they explain “how they will pay for it”? No such spectacle will be forthcoming, because that which props up the unquestionable axioms of US militarism is simply taken for granted, while that which provides for the poor, unhoused and vulnerable is a “wishlist” in need of a rigorous 10-point program detailing a plan for complete fiscal solvency.

This post originally appeared on Column (9/14/21), a media criticism and political analysis Substack newsletter written by Adam Johnson with contributions from Sarah Lazare.

The post Why Jake Tapper Never Asks How We Pay for War appeared first on FAIR.

This content originally appeared on FAIR and was authored by Adam Johnson.