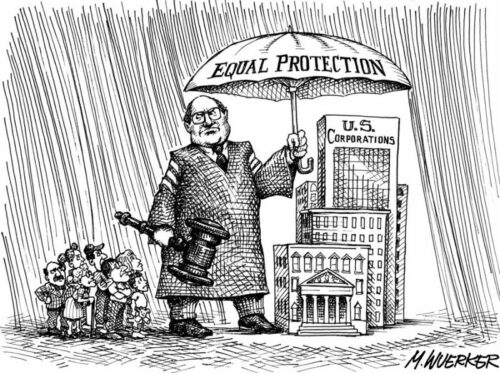 If you think elementary, middle, and high school students know too little history, geography, and government, try asking them about the corporations that command so many hours of their day, their attention, what they consume, and their personal horizons.

Today, school children are engulfed by corporate apps and software, textbooks biased toward the corporate definitions of an economy, and myths about “free markets.” For years free school materials and videos produced or sponsored by business groups, including the coal and nuclear industries, have flooded elementary classes. Our report: Hucksters in the Classroom: A Review of Industry Propaganda in Schools by Sheila Harty (1979), documented this mercantile assault on education. Students even take tests designed by corporate institutions.

Eleven-year olds have asked me “What is a corporation?” Teenagers ask, “What’s corporate crime?” or “What’s a company union?” These are the same youngsters who click on the handcuffing fine-print contracts of internet companies that own social media apps such as Instagram and TikTok. These are the same youngsters who are lied to daily by corporations about harmful junk foods and drugs, and whose parents overwhelmingly work in anti-union offices and factories.

Forget about students knowing or learning about “The Commons,” although they listen to music broadcast on the public airwaves and probably have visited a national park. (For more on The Commons see: Think Like a Commoner: A Short Introduction to the Life of the Commons by David Bollier). Students haven’t studied “corporate welfare,” even though taxpaying parents subsidize these government giveaways, handouts, and bailouts to demanding, mismanaged, or criminal corporations with power.

Schools forever have separated students from giant slices of reality – historical and contemporary. Much of this ignored or distorted reality shapes present conditions, such as the various controls of the many by the few. But today’s corporate plutocracy is at a different level of penetration altogether. Shucking past taboos, corporate marketeers hard sell directly to children bypassing or undermining parental authority. What they sell is obesity, diabetes, promiscuity, dangerous addictions and violence in their merciless “entertainment programs” and narratives about armed force, however illegal it may be.

In terms of sheer time, range of exposure, and planned peer group pressures, corporations are raising our children day and night. Big companies do strategic planning about everything affecting our children. There are no longer adequate limits and boundaries on corporatism or protections of commercial-free zones.

It’s getting worse. Eyewear for “augmented reality” from Facebook and rapidly expanding “artificial intelligence” induce dependency and more sedentary living. People from Bill Joy to Stephen Hawking to Elon Musk have strongly warned about these emerging technologies and the consequential loss of freedom and democracy.

I’d like to invite some open-minded educators to consider a six-hour curricula for late middle school through high school students on the modern global corporation. Hour One could be called “Big Corporations are Different from You and Me” illuminating this fast-dominating “artificial person” with all the rights of real humans yet structurally escaping from responsibility, a status of “privileges and immunities” under corporate law[lessness].

Hour Two could be devoted to the history of corporate power so heavily characterized by the costs of their amassing wealth – costs to workers, communities, small businesses, voters, consumers, patients, our governing ways, and, yes, students. Having been told repeatedly about how companies “built America,” students should learn about all the “NOs.” Corporations were operationally entrenched against the abolition of slavery, women’s suffrage, union organizing, the minimum wage, universal health insurance, early solar energy, mass transit, public campaign financing, and governmental institutions accountable to the citizenry. The most recent big “NOs” are against consumer, labor, and environmental justice and, of course, waging peace instead of forever wars of mayhem and profit have filled volumes of documentation.

Hour Three might run students through all the attempts and reforms by the American people to reign in the destructive, unjust excesses of large companies and their controlling ideology of corporatism. What were the results from all those widespread protests, regulatory actions, prosecutions, and electoral reforms? What are the successes of the peace movement, environmental groups and initiatives by workers, consumers, creators, and defenders of The Commons, (such as the public lands and public airwaves), investors and savers for justice and the common good? What happened to the corporate tax system, the drive for shareholder rights and corporate democracy and, most importantly, the rule of law over corporate power?

Hour Four, Hour Five, and Hour Six – well, to be continued. That is, if we hear from people interested enough in having this proposal described further.

This content originally appeared on Dissident Voice and was authored by Ralph Nader.