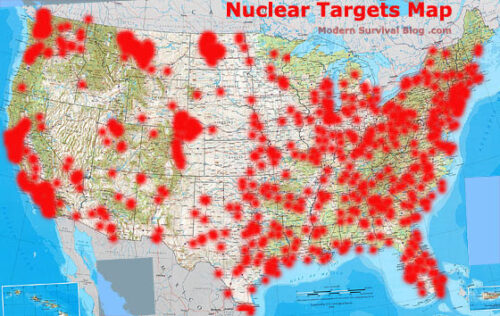 Amidst all of the sensible and sane cries to eliminate nuclear weapons, we are caught in a self-sustaining, self-reinforcing feedback loop. Call it the Death Spiral of Human Annihilation.

Yes, the U.S. throughout its history, despite official denials even among historians who should know better — maybe they do but prefer being manufacturers of myth rather than chroniclers of history — has been territorial, possessive and aggressive. The Monroe Doctrine declared the entire Western hemisphere as America’s backyard. The U.S. was hardly shy about grabbing as much as it could from Spain at the end of the Spanish-American War, lands as far away as the Philippines. Through treaties and hard-headed diplomacy, it has effectively turned most European nations, Australia, New Zealand, South Korea, and Japan into vassal states, which promote and serve the interests of the U.S., including using their military assets and personnel to take to the battlefield in undeclared wars and provocations against those countries the U.S. perceives as enemies or obstacles to its imperial rule.

This is not particularly extraordinary or surprising. Competition defines and drives much of what goes on between countries, each nation vying for advantage and improvements in its own standing and accumulation, regardless of what hardships it might impose on other countries and their populations. Thus U.S. adventurism and colonization was pretty much business-as-usual for much of its history, as it was for every other ambitious nation on the rise.

However, beyond predictable overt aggressiveness, it was at the end of, and immediately after, WWII that a seismic change occurred in Washington DC that has elevated our country to become the “greatest purveyor of violence in the world“, and propelled the entire planet toward the unstable, chaotic mess we now find ourselves in.

Politically there was the marginalization of Henry Wallace, and the installation of Harry Truman as president. Institutionally it was the creation of the extremely independent security organization, the CIA, as successor to the OSS (Office of Security Services). Programmatically, it was bringing 1600 Nazi scientists into the U.S. under Operation Paperclip. Economically, it was the continuation of a war economy and the expansion of the MIC — the military industrial complex — cementing in place the core elements of “forever war” even in times of peace. Dwight D. Eisenhower saw what was happening and in January 1961 warned the country of the dangers of this in his farewell speech.

The U.S. pursuit of empire and global hegemony now had the mechanisms, the funding, the know-how, the institutional momentum, the “right stuff”, to take the world stage. All of the toxic premises and preconditions were now circulating in the bloodstream of the military and diplomatic channels, a cocktail of pathogens for the madness that infected and captivated those in power, and still does to this day. 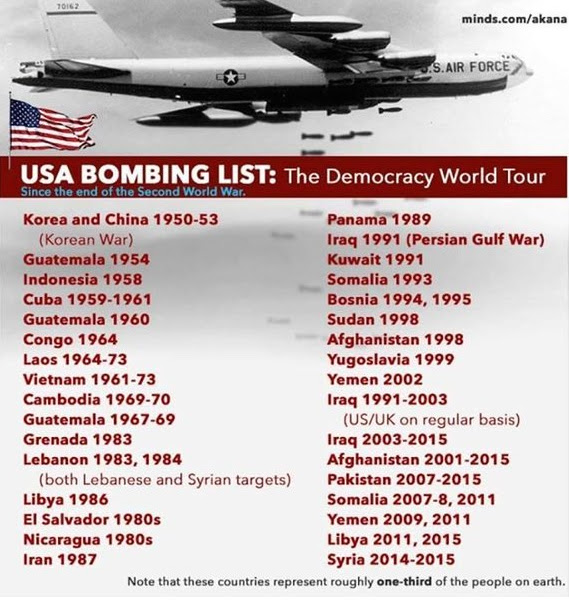 This virulence culminated in the 90s with the collapse of the Soviet Union. The U.S. turned its back on an unprecedented historical opportunity, the chance for peace and cooperation on a global scale, one that had the potential of initiating a millennium where wars were the rare exception, and the colonial power struggle paradigm would be consigned to history books. Instead it embraced the “end of history“, a baseless claim of ultimate superiority and entitlement based on America’s victory over the world’s only other superpower.

By the late 90s the U.S. pulled out all of the stops. It would leave no technology untapped, no opportunity unexploited, no promise or treaty unbroken, UN resolutions and world opinion be damned, international law deemed irrelevant. The trajectory we are now on was set in stone. It’s our way or bombs away.

Let’s not get distracted or deluded by claims of noble intent and appeals to the twisted logic of empire.

And our mental discipline starts with our never ever forgetting who started this mess. And thus who must take the lead in fixing it.

Dropping the atomic bombs on Japan sent a message to the world, particularly the Soviet Union.

“We have the ultimate weapon and we will use it. Don’t mess with us, don’t doubt our resolve, no one can stop us.”

The Soviet Union had no choice. Either develop a sufficient nuclear potential to counter that of the U.S. or be held hostage to bullying and coercion.

That unfortunate dynamic unleashed a nuclear arms race that at one point saw enough nuclear weaponry in the stockpiles of the U.S. and the USSR, to destroy the planet 50 times over. This madness has been tempered slightly with treaties but it’s still insanity by any rational measure. Russia and the U.S. still have over 13,000 nuclear weapons — much more powerful and “usable” than when they were at peak numerical levels — and other nuclear nations add another 1,125 to the mix. This is an improvement. The same improvement we could claim if a person only got shot 14 times instead of 50 times. The coroner’s work reconstructing the body for viewing might be a little easier. Should we count our blessings? 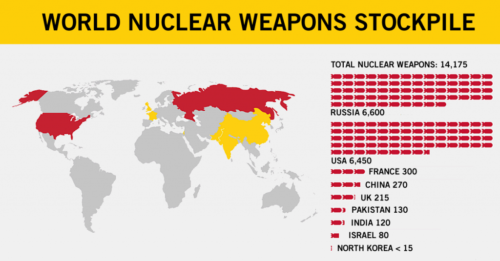 Listen, folks. It’s on us! Both the U.S. as a nation and the U.S. as citizens. There’s no passing the buck here, not when the survival of life on Earth is at stake.

Until the U.S. steps forward and leads the effort, nuclear warfare will always be with us. And annihilation of the human species will always hover over us as a real, increasingly probable result.

Moreover, please never forget: Those now in power will never backtrack on this suicidal course. It is what defines them, drives them. It’s as much a part of them as their hearts and brains and the void where their souls would be if they weren’t morally bankrupt, sociopathic mutants.

The only way we’ll have peace is if we REMOVE FROM POWER every single one of the warmongers.

No excuses. No compromise. No fear.

I recommend a massive awakening of 150-200 million U.S. citizens as to the personal costs of war, the inevitable product of: our military adventurism and expansion; our endless, unnecessary, illegal, immoral wars; our completely wasteful procurement of unneeded weapon systems, upgrading our nuclear arsenal, now putting weapons is space in violation of existing treaties; a commitment without the approval of the citizenry to “full- spectrum dominance“; i.e., world rule by an unchallengeable empire.

For decades the DOD and their rah-rah imperialists in office have had a blank check. And like anyone with a blank check, they’ve spent OUR MONEY with wild abandon. THIS is a strategy for defunding the military just enough so that it can properly defend our nation and its people, but no longer use everyday citizens as an ATM machine for its delusional, monomaniacal pursuit of hegemony over the entire planet. We the people never voted for this psychopathic agenda, one which smacks of master race conquest. THIS MECHANISM  will sufficiently drain the Treasury so that unnecessary DOD spending is impossible, and most importantly, extricate the crazies from the toxic dump they’ve turned our once-democratic institutions into.

Please repeat after me: No excuses. No compromise. No fear.

This content originally appeared on Dissident Voice and was authored by John Rachel.